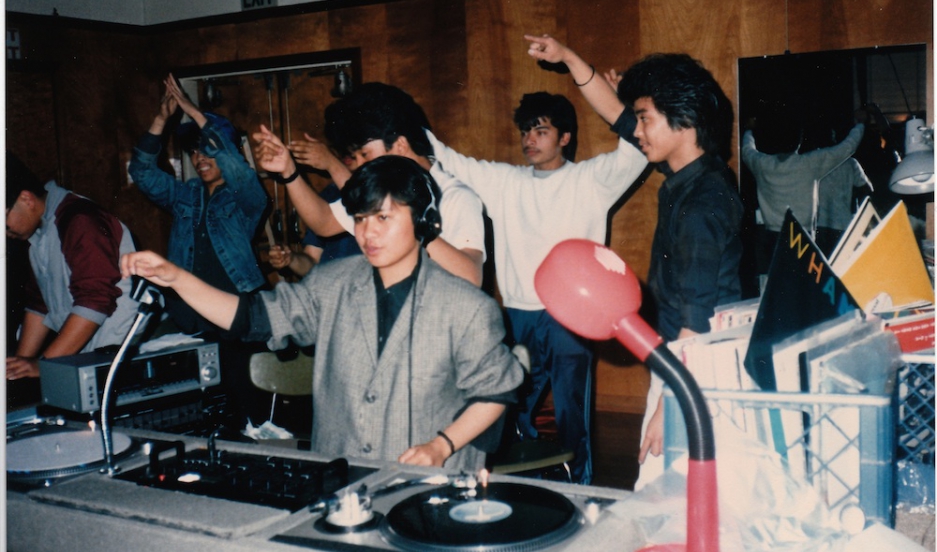 San Jose’s Cosmix Sounds, pictured here at a party in the mid-1980s, were famed turntablists in the San Francisco Bay Area. Suzie Racho, the DJ in the center, now works for KQED in San Francisco.

If you were a teenager in the ’80s, certain pop music might take you back — maybe to a nightclub, a wedding, birthday or house party — when disco hits and remixes by bands like Menage and Boys Town Gang got people on the floor.

For Filipino American communities putting down roots in California, pop hits from bands like these became a kind of soundtrack — and those behind the remixes gave rise to the Filipino-American DJ.

A new book, "Legions of Boom," by Oliver Wang, an associate sociology professor at California State University, Long Beach, chronicles the rise of Filipino American DJs, who started spinning in the San Francisco Bay Area in the ‘80s and ‘90s, and how that trend led to the emergence of some internationally famous DJs.

Orlando Madrid is part of the first generation of Filipino American DJs. I met him the other day at his house near San Francisco, along with other, younger DJs who look up to him. Madrid’s garage is crammed with sound equipment and records. He played us a classic from the ’80s, "Can't Take My Eyes Off of You," by Boys Town Gang. It has a cha-cha rhythm, Madrid explains, like the Cuban dance music, but electronic disco style.

Kevin Brown is one of the young DJs crowded around Madrid. “The DJ scene back in the day was legendary. People still talk about it,” he says.

In Madrid's day, the scene was mostly made up of high schoolers, throwing parties in suburban garages, holding DJ battles. They formed mobile DJ crews consisting of four or five kids roving with their light and sound equipment.

Much of Wang’s book traces the development and cultural importance of mobile DJ crews. “If you were a Filipino teenager growing up in the Bay Area, you probably had some connection to that scene,” Wang says. 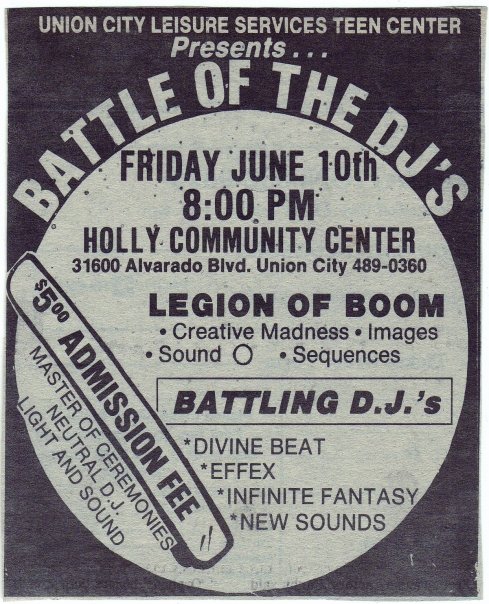 Party flier for a gathering in the '80s featuring Filipino American DJs in Union City, near San Francisco.

Some young DJs coming after Madrid even became famous — people like Q*bert, Mix Master Mike, Apollo, Shortkut. But instead of just playing records, these DJs started scratching them. DJ Shortkut, also known as Jonathan Cruz, is part of the generation of scratch DJs from the '90s who followed in the footsteps of mobile DJs like Madrid. “Oh yeah, I definitely credit a lot of what I do now to the mobile scene,” Cruz says.

Cruz says, like most Filipino American DJs, he got his start at family gigs, where people demanded those disco cha-cha hits. “It's funny, man, it's early ‘80s aerobic music!” he says. Now, he remixes a variety of music, has won national DJ battles, and is part of a tight-knit group of Filipino American DJs who have become world-renowned.

But Cruz remembers when people used to wonder who were all these “Asian DJs."

“I heard people underneath their breath say, ‘Who are these Chinese guys out of nowhere from the West Coast coming out here to battle?’” he says.

Today, Filipino Americans have become California’s largest Asian immigrant group, and Daly City, just south of San Francisco, has the largest Filipino community in the US. Madrid says the evidence is in the air. “The joke is, there's a lot of fog here because everyone is cooking rice,” he says.

Madrid adds that the DJ scene was also more than playing pop music. It helped these second-generation immigrants form an identity. Madrid never got famous, but he says the music kept him away from drugs and violence — side effects of the Filipino American gangs here in the '80s.

Being a DJ, Madrid says, “kept me out of a lot of trouble I could have gotten into.”

His family, like many in the community, supported his music. His parents bought him equipment and drove him to parties. It makes sense. They, too, were getting down to the music.