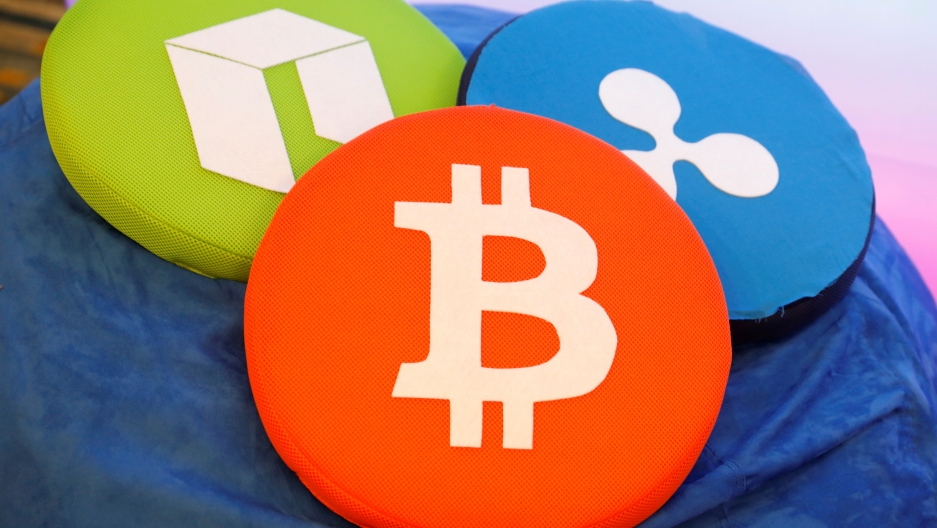 The bitcoin symbol is seen on a pillow on display at the Consensus 2018 blockchain technology conference in New York City, New York, May 16, 2018.

Cryptocurrencies have an image problem.

For the past few years, cryptocurrency networks like bitcoin have gained a reputation as energy hogs, eliciting headlines comparing their energy consumption to that of mid-sized countries.

“It was definitely surprising,” environmental engineer Max Krause said of his findings, published today in the journal Nature Sustainability.

Kraus and co-author Thabet Tolyamat analyzed how much energy computers running four top cryptocurrency networks used to unlock — or digitally mine — new currency. They then compared those figures to the energy required to physically mine metals including gold, copper, platinum and aluminum.

They found bitcoin mining requires more energy per dollar than mining copper and platinum but considerably less than mining aluminum.

The three other cryptocurrencies Krause and Tolyamat analyzed, Ethereum, Litecoin and Monero, required less energy than bitcoin but still more than most metals.

Kraus said he wanted to compare cryptocurrencies to more familiar commodities to help people better understand how much energy they consume.

"If we hope to use cryptocurrencies in the future as a separate currency from a dollar or a euro, are we willing to invest this much energy?” Krause asked. "[That's] what we're posing as a question."

Cryptocurrency “miners” use special hardware to run computations that add to a digital ledger and unlock new currency. The process is highly competitive and energy intensive.

David Malone from the Hamilton Institute at Ireland's Maynooth University says some cryptocurrency networks are seriously looking at revamping the process miners use to unlock new coins so it uses less energy.

“There’s a lot of effort going into this area,” says Malone, who published one of the earliest analyses of bitcoin’s energy footprint.

But Malone says bitcoin, the largest network and the most energy intensive in this study, is not among them.

“For bitcoin, I think the situation is actually slightly grim,” Malone said. “I think the only thing that will reduce the energy usage of bitcoin itself in the near future is likely to be a crash in value of bitcoin or something like that.”

Krause’s paper does highlight one reason for optimism: unlike traditional mining, cryptocurrency mining can happen anywhere in the world. If miners move server farms from countries powered heavily by fossil fuels to countries powered by renewables, that could significantly lower their carbon footprint.