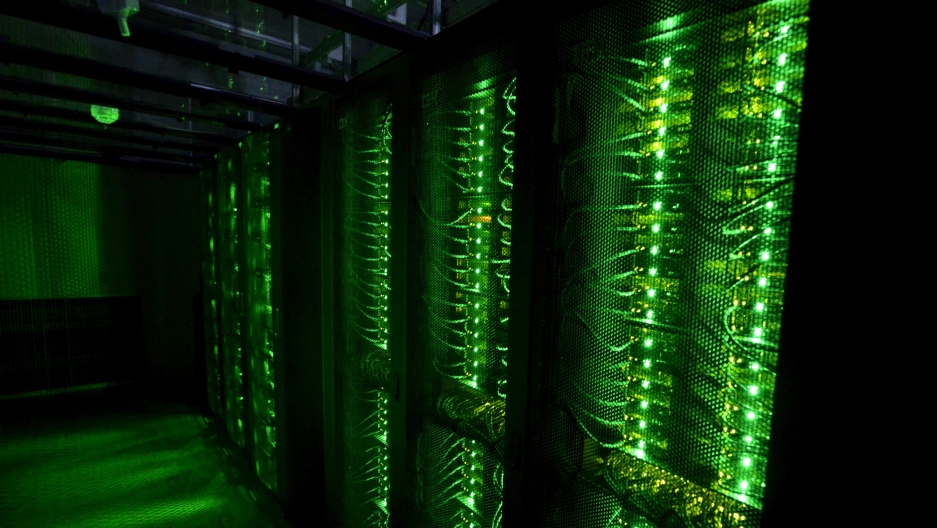 Servers for data storage are seen at Advania's Thor Data Center in Hafnarfjordur, Iceland August 7, 2015. Bitcoin servers are concentrated in China, but Iceland’s cool temperatures and abundance of renewable energy make it an attractive location as well.

As the value of the cryptocurrency bitcoin has shot up in the past several months, so too has its environmental footprint.

One bitcoin, which was worth about $800 a year ago, is worth more than 20 times that today. Estimates of how much energy is used to maintain the bitcoin network follows a similar trajectory.

In the past few weeks, the energy used by servers running bitcoin software has been compared to Ireland and Denmark’s energy consumption, and has been called a threat to the future of clean energy.

Eric Holthaus wrote for Grist that “by July 2019, the bitcoin network will require more electricity than the entire United States currently uses. By February 2020, it will use as much electricity as the entire world does today.”

Servers running bitcoin software compete against each other to solve complex puzzles that unlock new bitcoins. When a computer solves the puzzle correctly, it is awarded a new batch of bitcoins in a process called “mining.”

“As the price of bitcoin goes up, more computers are set up to mine bitcoin,” said Garrick Hileman, a cryptocurrency expert at the University of Cambridge.

And as the value of the currency goes up, it gets harder and harder — requiring more computing power — to solve those cryptographic puzzles.

Which means the energy consumption of the network is likely to continue rising.

Just how much energy are we talking?

The short answer is that no one knows for sure. The currency is de-centralized, and there’s no list of computers that make up the network or how much energy they use. All estimates about how much energy it takes to power servers maintaining the bitcoin network are just that: estimates.

Bitcoin's energy usage over the past month has slimbed steadily upward, according to estimates by Alex de Vries at Digiconomist.net.

The most frequently cited figures come from Alex de Vries, who runs the Bitcoin Energy Consumption Index on his blog, Digiconomist. De Vries does something of a reverse calculation to guess how much energy the network uses each day: he assumes that bitcoin miners spend 60 percent of their revenues on electricity, then guesses how much they pay per kilowatt-hour to calculate their energy consumption.

Based on Wednesday’s figures, de Vries puts the network’s energy use at 35 terrawatt-hours per year, close to the annual energy consumption of Bulgaria and enough to power more than three million US homes. His figures are the ones that generate headlines comparing bitcoin’s energy consumption to those of medium-sized countries.

But other people have found different figures, and those estimates can change dramatically over just a few months, as bitcoin’s value skyrockets and investors rush to add new computing power to the network.

In an April report, the Centre for Alternative Finance at the University of Cambridge mapped an estimate of the locations of mid-to-large sized bitcoin mining operations, adding up to 232 MW of power. "However," the authors note, "as a substantal fracton of the cryptocurrency mining capacity is not reported and the location of many mining facilites across the globe are kept secret.... it can be estmated that at least 462MW are consistently being consumed to secure Bitcoin’s blockchain alone."

Back in April, bitcoin entrepreneur Marc Bevand used actual efficiency rates of current bitcoin mining software and estimated a range of 470-540 megawatts, or 4.12-4.73 terrawatt-hours per year, in an opinion piece he wrote for Bitcoin Magazine.

That same month, a group from the University of Cambridge published a similar estimate. Author Garrick Hileman notes, however, that bitcoin values have shot up roughly 13-fold since that study was published, meaning energy use has risen significantly as well.

The most current and widely cited estimates put bitcoin’s yearly energy use at somewhere between 4 and 35 terrawatt-hours. To put that in perspective, all of Google used about 5.7 terrawatt-hours in 2015.

How does bitcoin compare to more traditional financial systems?

In his analysis of bitcoin’s sustainability, Harald Vranken estimates the entire banking system, including ATMs and bank branches, use 650 terrawatt-hours of energy per year.

When it comes to cash, no official cradle-to-grave figures exist for energy use in the production of US dollars or coins. But the European Central Bank does have energy consumption figures for the production of Euro banknotes. According to the ECB, it takes .025 kilowatt-hours to produce a banknote.

That means it takes about the same amount of energy to produce a 50 Euro bill as it does to power a 60-watt lightbulb for roughly half an hour. Producing the same value of bitcoin would require enough energy to power your house for four days.

That calculation uses de Vries' estimates, near the upper bounds for bitcoin's energy usage, and the most common Euro bill in circulation, the 50 Euro banknote.

Bitcoin’s essential nature as an energy hog has not escaped the currency’s investors.

Bitcoin’s infrastructure depends on users who download the currency’s entire history of transactions. Users then compete against each other to solve complex cryptographic puzzles. This work maintains the online bitcoin ledger and protects it against hacking, and is rewarded with bitcoins. Every 10 minutes or so, a new batch of bitcoins is released to the winning computer. (For a more detailed explanation of how bitcoin mining works, read this.) 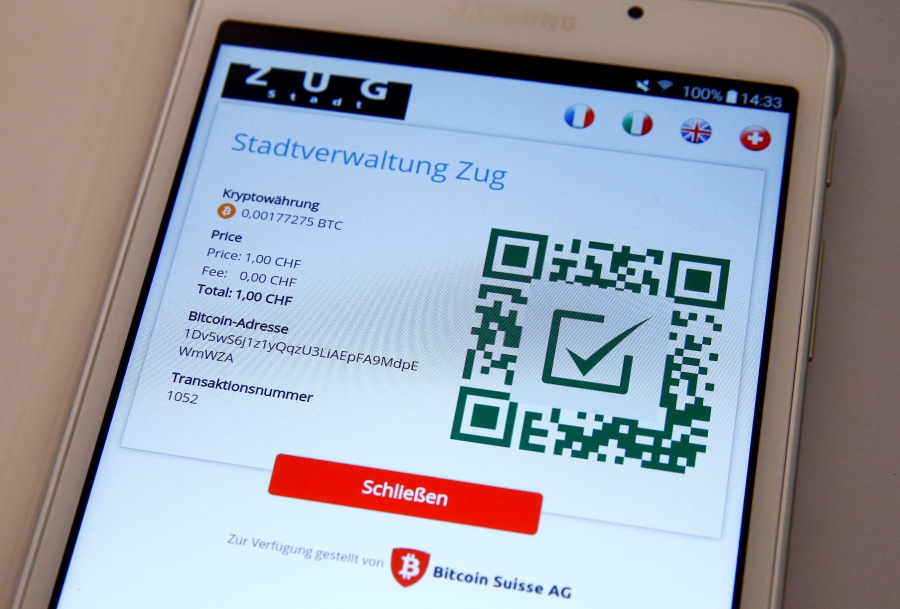 A transaction made with Bitcoin is seen on the display of a tablet at the Stadthaus town hall in Zug, Switzerland, August 30, 2016.

And as the value of the currency goes up, it gets harder and harder to solve those cryptographic puzzles.

When bitcoin first launched, users could competitively mine the currency on a home computer. Now, vast server farms are dedicated to the task. They’re heavily concentrated in China, where energy is cheap but also largely coal-driven.

Digiconomist’s de Vries estimates the carbon footprint of a single bitcoin transaction is 118 kilograms of CO2, about the same as driving a car 300 miles.

Bitcoin investors have looked for ways to make the cryptocurrency network more environmentally sustainable for years.

The most eagerly anticipated is the Lightening Network, which is currently under development and would add a layer to the bitcoin system to more easily and quickly process transactions, making it both more practical for paying for everyday purchases and less energy intensive.

Another potential solution would be to change Bitcoin's algorithm to allow networked computers to secure the currency using much less energy. Running more servers on renewable energy would also clean up bitcoin’s footprint.

But on a de-centralized system built on trust and verification, any major changes to how bitcoin works will take time to implement.

“A lot of smart people are working hard on a new security algorithm that would consume much lower amounts of energy than bitcoin’s current proof-of-work algorithm,” University of Cambridge’s Garrick Hileman said. “We expect to see in the next year or so one of these introduced on a major blockchain. If that doesn’t happen, then bitcoin’s going to continue to consume a lot of energy, especially if the price continues to go up.”