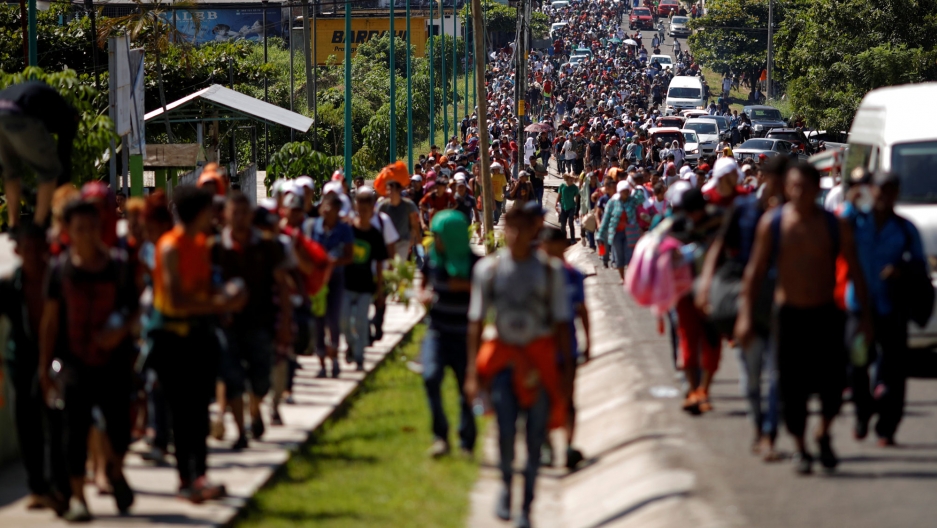 Central American migrants walk along the highway near the border with Guatemala, as they continue a journey trying to reach the US, in Tapachula, Mexico, Oct. 21, 2018.

Migrants, exhausted from the hours-long trek on foot from the Guatemalan border crowded into the Mexican border city of Tapachula on Sunday. Most ignored police offers to board buses heading to a migrant shelter because of suspicions they might be deported instead.

The migrants have defied threats by US President Donald Trump that he will close the US-Mexico border if the group advances, as well as warnings from the Mexican government that they risk deportation if they cannot justify seeking asylum in Mexico.

On Sunday, Trump said on Twitter that "full efforts are being made to stop the onslaught of illegal aliens," arguing that the migrants must apply for asylum in Mexico before attempting to petition US authorities.

In southern Mexico, police in riot gear shadowed the group along a southern highway, but did not impede their journey.

Among the people hiking into the center of the city was Roger Pineda, a 16-year-old Honduran.

"I just want to find some food and a place to sleep," he said, explaining he joined the group last week with five family members and a group of friends from the violent city of San Pedro Sula.

"I hope Trump allows us to make it to the other side," he said.

In Guatemala, local media reported that around 1,000 migrants were traveling north en route to the Mexican border. 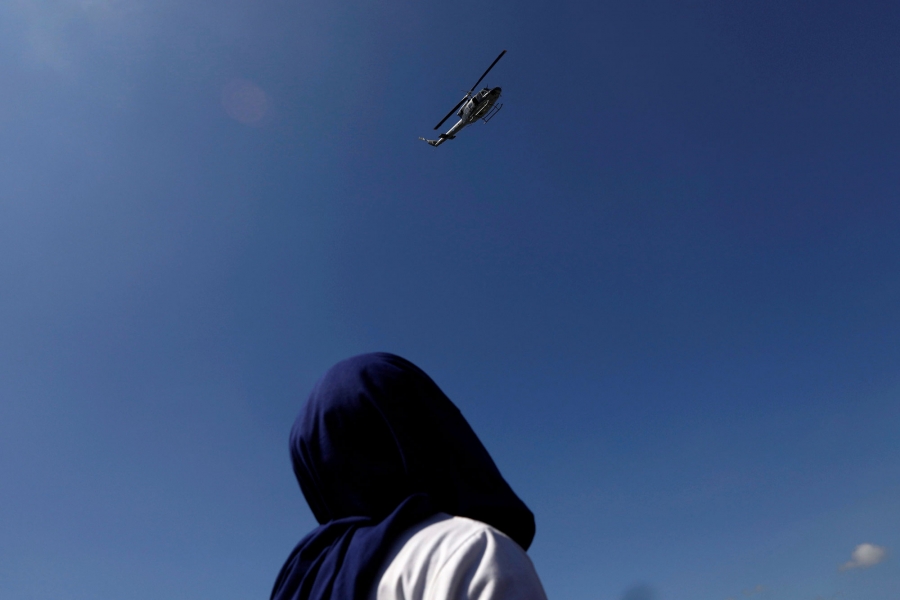 A Central American migrant, part of a group trying to reach the US, looks to helicopter as he waits to open the gate on the bridge that connects Mexico and Guatemala in Ciudad Hidalgo, Mexico, Oct. 21, 2018.

A large column of people marched under a burning sun Sunday as a military helicopter circled low overhead. Many migrants said they were fleeing a toxic mix of violence, poverty and corruption in Central America.

Most said they felt safer advancing in a large group.

"We're going to make it, we're going to keep moving so long as they don't stop us," said Honduran Jaffe Borjas, 17, marching alongside a childhood friend at the head of the column that stretched far down the highway to the horizon.

Along the route north to Tapachula, about 25 miles northwest of the border, some broke into song.

"If you send us back, we will return!" a large crowd shouted in unison.

"We are not criminals, we are workers!"

Mexican President-elect Andrés Manuel López Obrador supported the group and promised to provide people with work permits in a speech to supporters in Tuxtla-Gutierrez, about 180 miles north of Tapachula.

"I want to tell them they can count on us," said López Obrador, who will take office in December, to a smattering of applause.

He reiterated that he is seeking Trump's support to help fund a development plan that could alleviate poverty in Central America and southern Mexico.

Since the group formed last weekend, Trump has threatened to halt aid to Honduras and Guatemala, and potentially close the US border with Mexico with the help of the military, if the migrants' march is not stopped.

Mexico's government has said throughout the past week that it would register the migrants and process requests for asylum. Those attempting to skip the process would face deportation, but the size of the group will test Mexico, which has sought help from the United Nations to manage the issue. 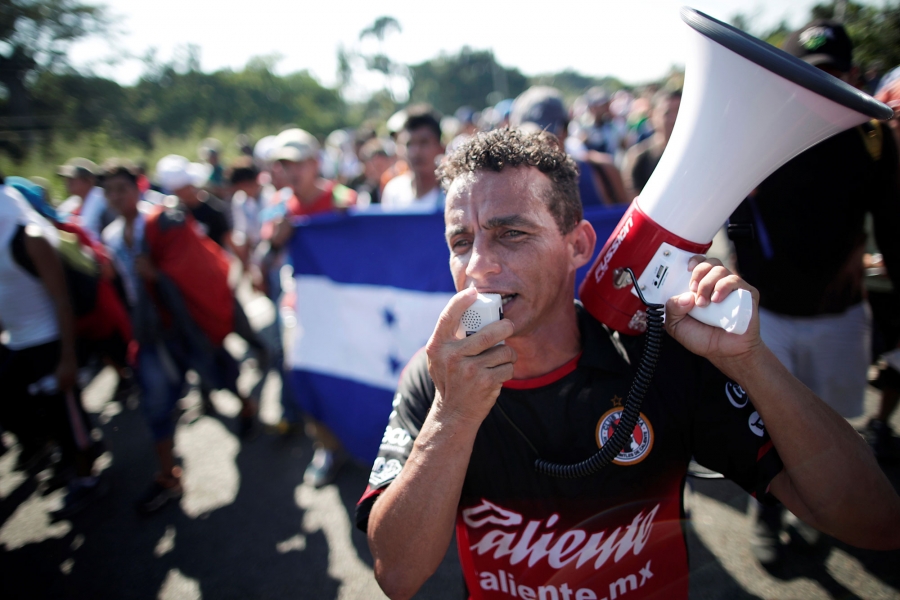 Central American migrants shout slogans as they walk along the highway near the border with Guatemala, while they continue their journey trying to reach the US, in Tapachula, Mexico, Oct. 21, 2018.

More than 3,400 Hondurans migrants had been returned to their home country over the past 48 hours by Sunday afternoon, according to a migrant assistance body led by the wife of Honduran President Juan Orlando Hernandez, Ana Garcia de Hernandez.

"We're urging people against migrating in an unlawful way and putting your children in extremely dangerous conditions," Garcia de Hernandez said in a statement.

The Honduran government has also blamed the political opposition back home for encouraging the exodus of migrants.

Mexican immigration authorities said they had allowed some 1,028 migrants through the official border crossing in Ciudad Hidalgo near the bridge spanning the Suchiate River over the past three days.

The slow pace prompted thousands to cross the river illegally by raft or by swimming to the opposite shore.

Reporting by Delphine Schrank in Tapachula, Sofia Menchu in Guatemala City and Gustavo Palencia in Tegucigalpa; Editing by Diane Craft and Grant McCool.