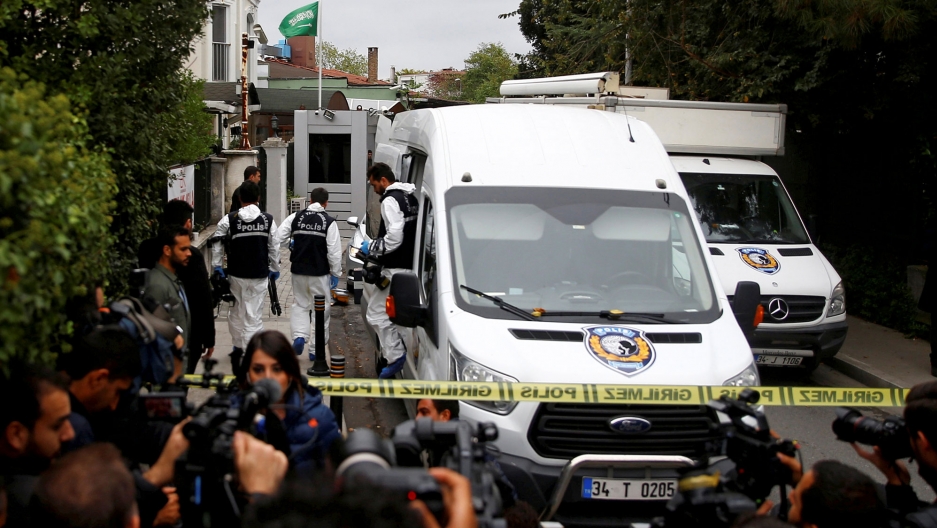 Suggesting he didn't want to abandon Saudi allies, US President Donald Trump said on Wednesday he was waiting for a full report on what had happened to Jamal Khashoggi from Secretary of State Mike Pompeo, whom he sent to Saudi Arabia and Turkey to meet with officials over the disappearance of the Saudi government critic.

Turkish officials have said they believe Khashoggi, a Washington Post columnist who was critical of the authoritarian kingdom's Crown Prince Mohammed bin Salman, was murdered at the Saudi consulate in Istanbul on Oct. 2 and his body removed. The Saudis have denied the allegations.

Turkish sources have told Reuters the authorities have now an audio recording indicating Khashoggi was killed inside the consulate. He has not been seen since entering the building.

Turkey's pro-government Yeni Safak newspaper on Wednesday published what it said were details from audio recordings that purported to document Khashoggi's torture and interrogation.

Khashoggi was killed within minutes and his torturers severed his fingers during the interrogation, the newspaper said. His killers later beheaded and dismembered him, it said.

Turkey has not shared with the US government or European allies graphic audio or video evidence, seven US and European security officials told Reuters. The United States and allies have collected some intelligence through their own sources and methods, which partly confirms news reports based on leaks of audio recordings, four of the sources said.

Trump, who has forged closer ties with Saudi Arabia and the  33-year-old crown prince, said the United States has asked Turkey for any audio or video evidence.

Asked in a Fox Business Network interview if Washington could abandon Riyadh, Trump said: "I do not want to do that."

Trump reiterated his hopes that Saudi leaders were not involved in the disappearance of Khashoggi, a US resident.

"I want to find out what happened, where is the fault, and we will probably know that by the end of the week," Trump later told reporters.

"We have asked for it, if it exists ... I'm not sure yet that it exists, probably does, possibly does," he said of the  audio or video evidence.

US media outlets have reported that Riyadh, despite its earlier denials of involvement, will acknowledge that Khashoggi was killed in a botched interrogation. Trump has speculated without providing evidence that "rogue killers" could be responsible.

How the crown prince emerges from the crisis is a test of how the West will deal with Saudi Arabia in the future.

Trump has appeared unwilling to distance himself too much from the Saudis, citing Riyadh's role in countering Iranian influence in the region — and tens of billions of dollars in potential arms deals.

Other Western nations, although expressing concern about the incident, face a similar delicate situation in their dealings with the world's top oil exporter.

Pompeo said Riyadh should be given a few more days to complete its own probe into Khashoggi's disappearance. He met Turkey's president and foreign minister, a day after Trump gave Saudi Arabia the benefit of the doubt.

"They're going to do an investigation, and when the investigation comes out we'll evaluate it," Pompeo told reporters traveling with him.

A State Department spokeswoman said Pompeo had not heard any audio recording purporting to indicate Khashoggi was killed.

Pompeo also said the United States must be mindful of important business and government ties with Saudi Arabia as it considers any steps once the facts have been determined.

Turkish crime scene investigators were still working at the consulate early on Thursday, using bright lights to illuminate the garden, though it was not clear what they were doing.

A pro-government Turkish daily published preliminary evidence last week from investigators who it said had identified a 15-member Saudi intelligence team that arrived in Istanbul on diplomatic passports hours before Khashoggi disappeared.

The Washington Post published a column by Khashoggi it received from his assistant a day after he was reported missing.

In the column, Khashoggi condemns the crackdown on journalists by Arab governments and the failure of the international community to respond. "As a result, Arab governments have been given free rein to continue silencing the media at an increasing rate," he wrote.

One name matches a LinkedIn profile for a forensic expert who has worked at the interior ministry for 20 years. Another is identified in a diplomatic directory from 2007 as a first secretary at the Saudi Embassy in London. Others resemble officers in the Saudi Army and Air Force.

After meeting the king and crown prince on Tuesday, Pompeo said Saudi Arabia has committed to a full investigation.

Asked whether they said Khashoggi was alive or dead, Pompeo said: "They didn't talk about any of the facts."

Prince Mohammed has painted himself as the face of a new, vibrant Saudi Arabia, diversifying its economy away from reliance on oil and making some social changes.

But there has been criticism of some of his moves, including Riyadh's involvement in the Yemen war, the arrest of women activists, and a diplomatic row with Canada.

US Treasury Secretary Steven Mnuchin said his plans to attend an investment conference in Riyadh next week would be revisited on Thursday after US officials have a chance to consult Pompeo. International Monetary Fund Managing Director Christine Lagarde and top executives from Societe Generale and Glencore joined a growing list of executives who have pulled out.

Saudi Arabia has said it would retaliate against any pressure or economic sanctions.