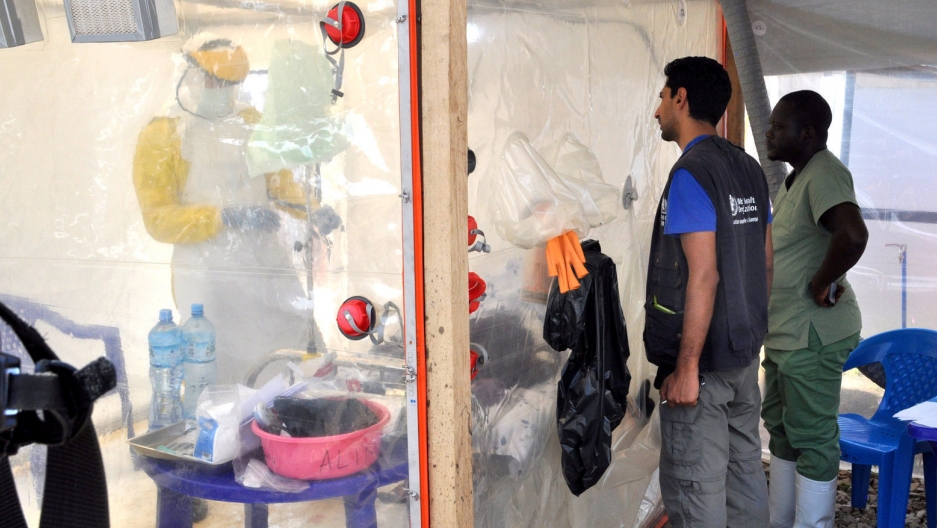 A doctor cares for a patient inside an isolate cube at The Alliance for International Medical Action (ALIMA) treatment center in Beni, North Kivu province of the Democratic Republic of Congo, Sept. 6, 2018.

Democratic Republic of Congo's Ebola outbreak is expected to last several months and could spread to Uganda or Rwanda, the World Health Organization (WHO) said on Thursday.

The most concerning area is the city of Beni in Congo's North Kivu province where dozens of people who may have been exposed to the deadly disease are hiding from health workers, WHO's emergency response chief Peter Salama said.

"We anticipate that now we’ll be looking at least another three to four months in order to really stem this outbreak, with a strong focus in Beni and surrounding areas," Salama said. "I’d say that’s the best case scenario."

The outbreak has caused 194 cases and 122 deaths. Two-thirds of cases in the past month have been in and around Beni, where the Ebola response was disrupted last month by attacks by armed groups and a period of official mourning.

The next few days will tell if the wave of infections in Beni is over, Salama said, depending on the security situation and the local community's willingness to support the response.

"If, however, this peak is accompanied by a peak in insecurity which limits our ability to get to all these cases and their contacts, then we could see a much larger wave building. A lot is depending on that security situation," Salama said.

In the latest attack, the United Nations said four civilians were killed near Beni on Tuesday.

Health workers are aware of many people with potential exposure to Ebola. Salama said 80-90 percent were being monitored but around 40 percent or more are "actively avoiding follow-up," increasing the risk of the disease spreading, he said. More than 90 percent of those people were in Beni, he said.

Some Ebola victims are suspicious of health workers, fearing that hospitalization is a death sentence — despite the obvious risks of missing out on treatment — while some families insist on conducting traditional burials, which can spread the virus.

Salama said Uganda and Rwanda could see Ebola cases but both were well prepared for a rapid response. However, neither have approved the vaccine, which could be given pre-emptively to health workers and "within hours" to people at risk from any confirmed case.

Ebola has no known cure, but four treatments have been given to 66 patients, which Salama described as "a big breakthrough".

With government approval in Congo, a clinical trial could start within weeks to identify the most reliable drug, he said.