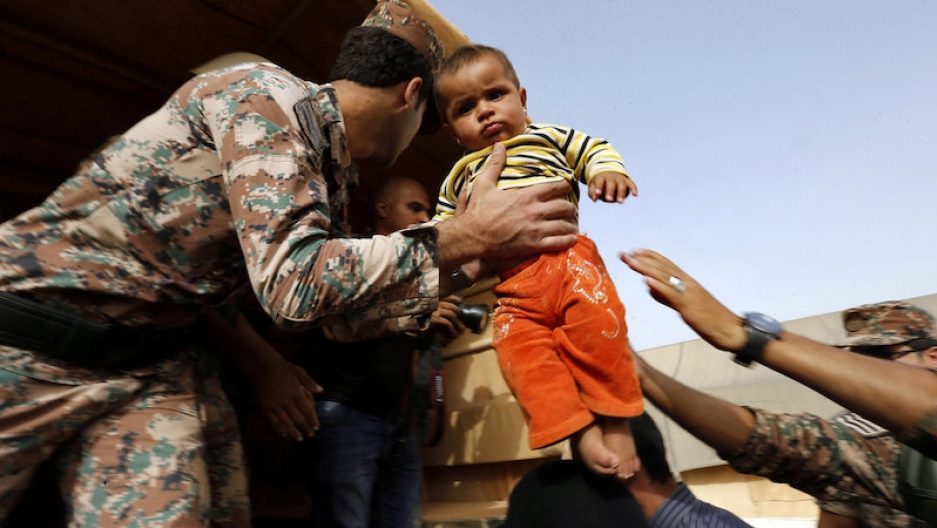 A Jordanian soldier carries a Syrian refugee child to help him board a Jordanian army vehicle with his family after they crossed into Jordanian territory.

Thousands of Syrians stranded on Jordan's border with Syria are running out of food as routes leading to their camp are closed by the Syrian army and Jordan is blocking aid deliveries, relief workers and refugees said on Thursday.

The Syrian army has tightened its siege of the camp, in Rukban, near the northeastern Jordanian border with Syria and Iraq, preventing smugglers and traders from delivering food to its 50,000 inhabitants, mostly women and children.

"More than a week ago the Syrian regime cut all the routes of supplies towards the camp. There are now only very small amounts of food that smugglers bring," Abu Abdullah, the head of the civil affairs council that runs the camp, told Reuters.

"The camp is a balloon that could explode at any moment because of hunger, sickness and lack of aid ... if the situation continues like this there will be real starvation," he added by phone. In the last three years, tens of thousands of people have fled to the camp from Islamic State-held parts of Syria that were being targeted by Russian and US-led coalition air strikes.

Rukban is located near a US garrison in southeastern Syria at Tanf on the Iraqi-Syrian border. The camp falls within a so-called deconfliction zone set up by the Pentagon with the aim of shielding the Tanf garrison from attacks by pro-Assad forces.

Damascus says the US forces are occupying Syrian territory and providing a safe-haven in that area for rebels it deems terrorists.

Jordan has since the start of the year blocked any aid deliveries to the camp over its frontier and says now that the Syrian government had recovered territory around the camp, it could not be made responsible for delivering aid.

With Damascus intransigent, UN aid agencies have been pressing Jordan to let in urgent deliveries to stave off more deaths, aid workers and diplomatic sources said.

The U.N. children's agency UNICEF warned on Thursday that without "critical action" by parties to the conflict to "allow and facilitate access" the lives of thousands of children in the camp were at risk.

"The situation for the estimated 45,000 people — among them many children — will further worsen with the cold winter months fast approaching, especially when temperatures dip below freezing point in the harsh desert conditions," Geert Cappelaere, UNICEF regional director for Middle East and North Africa, said in a statement.

Jordan wants the United Nations and Russia to put pressure on Damascus to give the written authorizations needed to allow supplies into Rukban from Syrian government-held territory.

Jordanian Foreign Minister Ayman Safadi said recently that his country, already burdened with hundreds of thousands of refugees fleeing war-torn Syria, could not be made responsible for delivering aid to the camp.

Western diplomatic sources believe the siege of the camp is part of a Russian-backed Syrian government effort to put pressure on Washington to get out of Tanf.