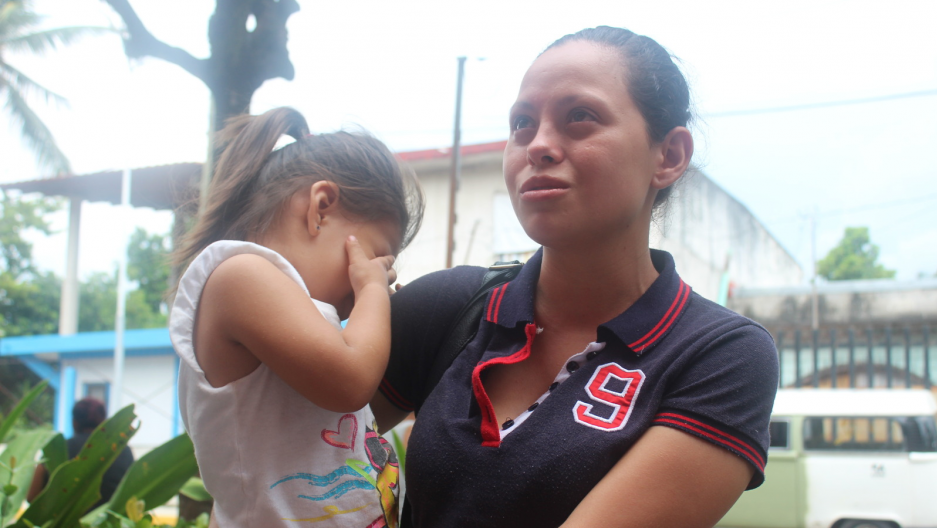 Maciel Garcia, 25, with her 3-year old daughter, Kayssee, at a migrant shelter in Tapachula, Mexico.

Kids shriek with oblivion as they play the “Big Bad Wolf” in one of the many migrant shelters in the dusty border city of Tapachula, Mexico, which has become a hub for Central Americans fleeing their countries. Their parents watch on with concerned faces, trying to map out their next steps.

Maciel García, 25, stands off to the side with her 3-year-old daughter, Kayssee. She’s a shy girl with chubby cheeks who’s grabbing onto her mother’s leg with one hand and holding a small video player with the other, watching cartoons.

They arrived at this overcrowded shelter a few days earlier, along with García’s husband, as they fled the violence in Nicaragua.

The political crisis that has enveloped Nicaragua since April — when mass protests broke out demanding the resignation of President Daniel Ortega, prompting a violent crackdown by the government — has prompted thousands of Nicaraguans to flee. About 200 are seeking asylum daily in Costa Rica. And an unprecedented number are heading north, to Mexico and the United States.

Normally, it’s people from Guatemala, Honduras and El Salvador who pass through Tapachula, seeking an escape from gang violence and extreme poverty. But shelter workers here say they have seen a record number of Nicaraguans in recent months. Many, like García, say their goal is to reach the United States.

Between tears, García explains why she fled. She said she was a nurse in Nicaragua, and her bosses forced her to walk in pro-government marches engineered by Ortega to counter the protests against him. She participated, reluctantly. But then, she said, she was seen treating injured anti-government protesters who had been shot by security forces.

García said the hospital fired her and refused to hand over her nursing certificate so she could get a job elsewhere. According to Human Rights Watch, Nicaraguan Health Ministry authorities have fired dozens of nurses and doctors deemed politically unfriendly to the government. García said after she was fired, the police came to her house looking for her. She and her family hid under the bed.

“Because of that I had to flee, and I am here looking for help,” she said, sobbing. “When you have a kid, you have to keep moving forward.”

Ortega came into power in the 1980s as a former guerrilla leader who helped oust a right-wing dictator. Now, critics say he’s turned into a dictator himself, siding with the elite and silencing people with opposing views. Pro-government forces have killed more than 300 anti-Ortega demonstrators since April, according to human rights activists.

Hundreds of anti-Ortega protestors have also arrested under a broad anti-terrorism law.

“What’s changed is the scope with which people have been targeted,” said Alexander Parcan, an attorney with the group Human Rights First who is representing Nicaraguans seeking asylum in the United States.

He said until this year, the few people fleeing Nicaragua were mostly outspoken political activists. But he says now Ortega is labeling regular people who participated in the protests — teachers, bus drivers, nurses, etc. — as political enemies.

“Groups of people have been wrapped up in these protests and targeted in extremely severe ways. This is persecution against people who are expressing an anti-government political opinion,” Parcan said.

The 24-year-old is standing outside the shelter in Tapachula talking with some of his cousins who fled with him from Nicaragua. His right eye is swollen and purple and he has a fresh scar that extends from the corner of his eye onto his forehead. He said security forces beat him up during an anti-government march. 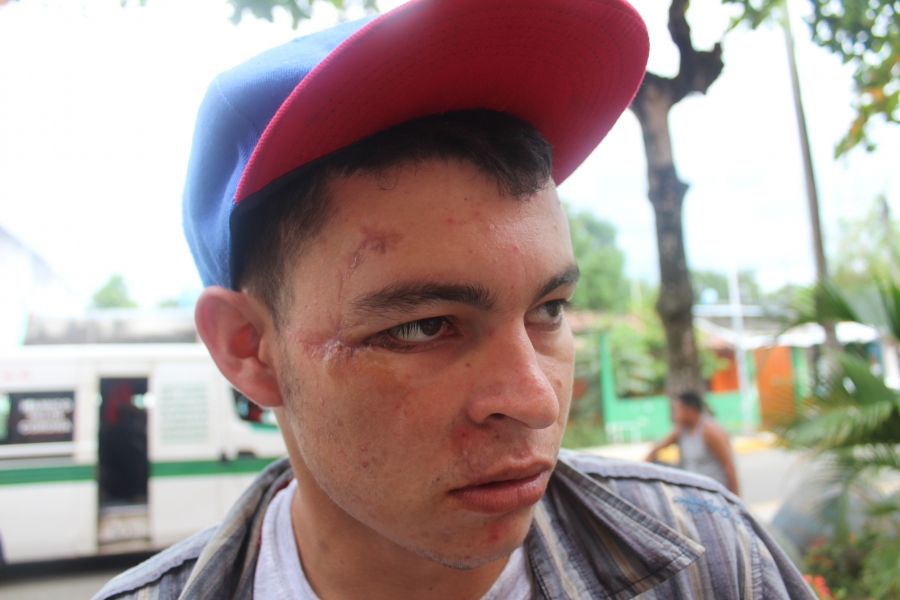 Luis Alberto Cruz, 24, who said he was beat up by government forces while participating in anti-Ortega protests.

According to Mexican immigration officials, the number of Nicaraguans detained has increased 125 percent since April. US Border Officials don’t have statistics on how many Nicaraguans are applying for asylum, but immigration attorneys say they are also seeing an increase.

Much of the increase is from people like Maciel García and her family. A week after meeting them in Tapachula, García spoke to The World via phone.

García said they made it to the US-Mexican border in Tijuana. They are going to apply for asylum, to get to their relatives in Los Angeles.

But after that first phone call, she can't be reached. Her phone goes straight to voicemail. Lawyers representing migrants say a growing number of Nicaraguans are either stuck in Mexico, waiting for an appointment with border officials, or being held in detention on the US side.

The wait to have their case heard is likely to get longer as a growing number of Nicaraguans flee violence and try to find a home in the US.