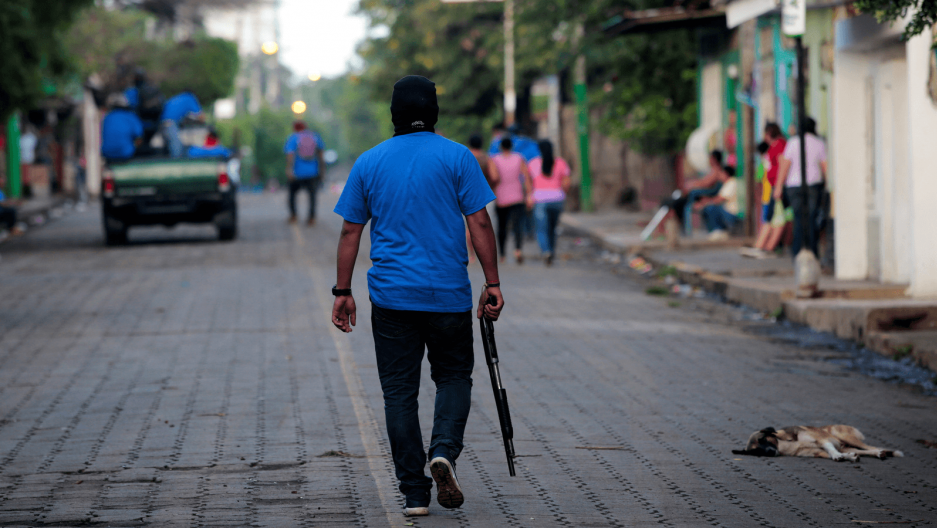 A pro-government supporter walks on a street after clashes with demonstrators in the indigenous community of Monimbo in Masaya, Nicaragua, July 17, 2018.

Central American migrants have long been at the center of what consecutive US administrations have called the immigration “crisis.”

Each year, thousands of Central Americans are caught attempting to cross the US-Mexico border unlawfully. According to the Migration Policy Institute, the vast majority are asylum-seekers from Honduras, Guatemala and El Salvador, fleeing the region’s brutal gang violence and societal chaos.

Typically, only a tiny fraction of migrants come to the US from the neighboring Central American nation of Nicaragua. Their numbers are so small that Nicaraguans are rarely even mentioned in Customs and Border Protection reports.

But Nicaragua has been in turmoil for months, as an uprising against the authoritarian regime of Daniel Ortega and his Sandinista party grows ever bloodier. Last weekend, three college students were killed during a 15-hour clash at a church on the campus of the National University of Nicaragua, in Managua, which had been occupied by anti-government protesters since April.

At least 350 people have been killed so far, most at the hands of pro-government forces.

This violence may prompt many Nicaraguans to start fleeing their country soon, too.

Nicaragua, home to approximately 6.2 million people, is one of the poorest countries in the Western Hemisphere.

But it has largely avoided the widespread crime and instability that for decades has dogged this corner of the world. Nicaragua’s 2017 homicide rate of seven killings per 100,000 was the lowest in Central America.

When Nicaraguans migrate, typically they are seeking better-paying jobs.

Rather than travel all the way to the United States, economic migrants from Nicaragua mostly head to neighboring Costa Rica, the stablest and most prosperous country in Central America. An estimated 500,000 Nicaraguans currently live and work in Costa Rica. 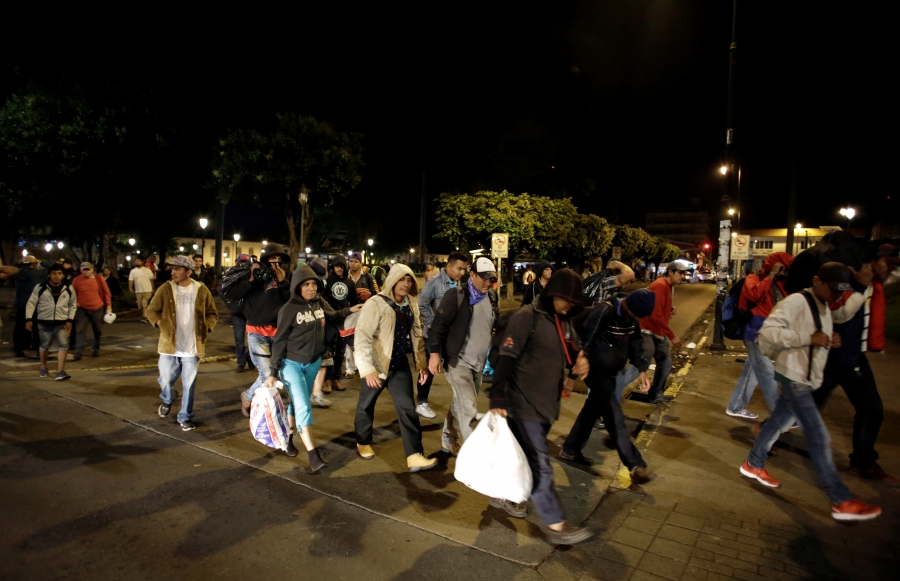 Nicaraguan refugees fleeing their country due to unrest walk to a Christian church to sleep in San José, Costa Rica, July 28, 2018.

This migration pattern may soon change.

My research on violence in Central America reveals that the destabilizing conditions that have historically prompted many Guatemalans, Salvadorans and Hondurans to flee are now taking root in Nicaragua.

Since April, the government of Daniel Ortega has been trying to crush a nationwide protest movement that demands his resignation.

Demonstrations first erupted in Nicaragua on April 16, 2018, after the government announced social security reforms that would raise costs for retirees and workers. Police soon cracked down on protesters. Students took to the streets.

Within days, tens of thousands of Nicaraguans were protesting in cities and towns nationwide.

In response, the regime dispatched police clad in riot gear, hired henchmen and state-sponsored paramilitary groups to put down the protests. So far, these pro-Ortega forces have killed hundreds of people and wounded more than 2,100, according to the nonprofit Human Rights Watch.

In its attempt to suppress the uprising, Ortega’s government has supplemented its police forces with groups of armed partisans, vigilantes and death squads.

According to the Inter-American Commission on Human Rights, which visited the country in May, the regime outsourced protest-repression duties to informal armed groups associated with the state. These so-called “para-police” — formed by citizens allied with Ortega’s Sandinista Party — work in coordination with the police.

Outsourcing state violence is not a novel tactic. In Venezuela, the authoritarian government of Nicolás Maduro has also armed militant supporters and supported criminal gangs willing to “defend” the regime.

During Central America’s civil war period, in the 1980s, the governments of Guatemala, Honduras and El Salvador also used paramilitaries, vigilantes and groups of sympathizers to suppress protests and punish dissidence.

In Guatemala, the army mobilized hundreds of thousands of people in civilian “self-defense” patrols to fight guerrillas who opposed the country’s military dictatorship. El Salvador’s government built wartime death squads responsible for bloody massacres against civilians, or anyone assumed to support the anti-regime insurgency.

As the post-war truth and justice commissions in both countries would later document, many of these armed factions survived the end of the conflicts.

By the late 1990s, death squads and paramilitaries were using their government connections and expertise to prey on the Central American population and infiltrate these countries’ new criminal justice institutions.

People often associated crime in Central America with gangs like MS-13. But my research shows that the foundations for the region’s current criminal violence were laid decades ago, when Central American governments armed thugs and deployed them against their own people.

Outsourcing state violence may temporarily quash popular dissent. But it creates the conditions for more violence – not just political violence but criminal violence, too.

Creating the conditions for rampant crime

Nicaragua managed to avoid such post-war chaos in large part because of institutional reforms undertaken in the 1990s after the Sandinista revolution.

The Sandinista rebels overthrew the Somoza dictatorship in 1979 and dismantled the country’s infamously brutal National Guard. However, they emerged from the revolution with firm control over the new police and army.

After the Sandinistas lost power in the 1990 presidential election, the new government of Violeta Chamorro undertook a complex set of reforms that, among other changes, established clear boundaries between law enforcement, the army and political parties in Nicaragua.

Those reforms strengthened the Nicaraguan state such that non-state forces could no longer violently confront — or substitute — government institutions.

The separation between politics and security forces began to erode when Daniel Ortega — who had previously ruled the country during the revolutionary 1980s — was re-elected in 2006.

Those institutions had kept Nicaraguans relatively safe for over a decade.

Even as criminal organizations, death squads and, increasingly, street gangs were fueling record levels of violence elsewhere in Central America, Nicaragua’s murder rate in the early 2010s was similar to Costa Rica’s.

Evidence suggests that organized crime groups and drug cartels are now operating in Nicaragua, too, taking advantage of the ongoing chaos there to deepen and expand their networks.

This also follows a pattern I’ve seen before in the region. After Honduras’ 2009 coup, political unrest laid the groundwork for collusion between the state and organized crime groups.

Already, many Nicaraguan youths have begun flocking to the Costa Rican border, fleeing the paramilitary onslaught.

But Costa Rica has long wanted to close its borders to Nicaraguan economic migrants. As Nicaragua’s crisis deepens, it will surely tighten border security.

Soon enough, it is likely that many more Nicaraguans will join other Central Americans on their long northward trek, seeking refuge over the US border from unrelenting violence in their home.