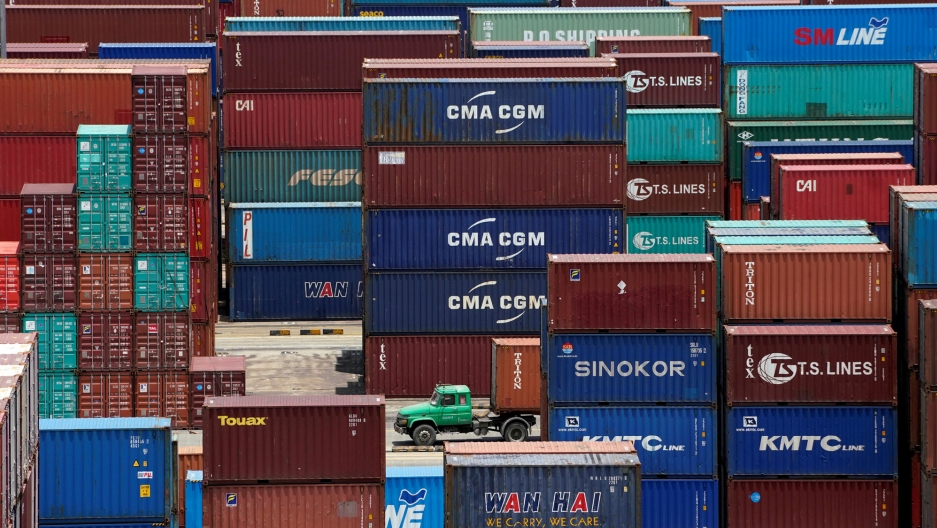 Shipping containers are seen at a port in Shanghai, China.

The United States and China imposed a new round of tariffs on each other's goods on Monday. Soon after the new duties went into effect, China accused the US of engaging in "trade bullyism."

But Beijing also said it was willing to restart trade negotiations with the United States if the talks are "based on mutual respect and equality," the official state news agency, Xinhua said, citing a white paper on the dispute published by China's State Council.

US tariffs on $200 billion worth of Chinese goods and retaliatory tariffs by Beijing on $60 billion worth of US products took effect at midday Asian time, though the initial level of the duties was not as high as earlier feared.

The US will levy tariffs of 10 percent initially, rising to 25 percent at the end of 2018. Beijing has imposed rates of 5-10 percent and warned it would respond to any rise in US tariffs on Chinese products accordingly.

The two sides had already slapped tariffs on $50 billion worth of each other's goods.

For US consumers, the new duties could translate into higher prices for Chinese products ranging from vacuum cleaners to technology gear such as home modems and routers, while US goods targeted by Beijing include liquefied natural gas and certain types of aircraft.

President Donald Trump is pressing China to reduce its huge bilateral trade surplus and make sweeping changes to its policies on trade, technology transfers and high-tech industrial subsidies. Beijing has denied that US firms are forced to transfer technology and sees Washington's demands on rolling back its industrial policies as an attempt to contain China's economic rise.

The US administration "has brazenly preached unilateralism, protectionism and economic hegemony, making false accusations against many countries and regions, particularly China, intimidating other countries through economic measures such as imposing tariffs," Xinhua quoted the State Council's white paper as saying.

'No end in sight for trade war'

Several rounds of Sino-US trade talks in recent months have yielded no major breakthroughs and attempts at arranging another meeting in coming weeks have fallen through. A senior White House official said last week the US will continue to engage China, but added there was no date for further talks.

China, which has accused Washington of being insincere in the negotiations, has decided not to send Vice Premier Liu He to Washington this week, The Wall Street Journal reported late last week.

News of Beijing's decision to skip the talks pushed China's yuan currency down 0.3 percent on Monday in offshore trade, reinforcing investors' fears that both sides are digging in for a long fight. Mainland China markets were closed for a holiday.

Economists warn that a protracted dispute will eventually stunt growth across the globe. Companies on both sides of the Pacific are already reporting disruptions to their operations and are reviewing investment plans.

The trade tensions have also cast a pall over broader relations between Beijing and Washington, with the two sides butting heads on a growing number of issues.

China summoned the US ambassador in Beijing and postponed  military talks in protest against a US decision to sanction a Chinese military agency and its director for buying Russian fighter jets and a missile system.

Rob Carnell, ING's chief Asia economist, said in a note to clients that in the absence of any incentives Beijing would likely hold off on any further negotiations for now.

"It would look weak both to the US and at home," he said, adding that there is "sufficient stimulus in the pipeline" to limit the damage of the latest tariffs on China's economy.

"The US-China trade war has no clear end in sight."

China may also be waiting for US mid-term elections early next month for any hints of changes in Washington's policy stance, Carnell added.

"With generic polls favoring the Democrats, they may feel that the trade environment will be less hostile after November 6."

Bloomberg reported that the China Daily, Beijing's official English newspaper, paid for a four-page advertising supplement on Sunday in the Des Moines Register — the largest newspaper in the politically important state of Iowa — that highlighted the impact of the trade war on soybean farmers.

Trump on Saturday reiterated a threat to impose further tariffs on Chinese goods should Beijing retaliate, suggesting that Washington may slap tariffs on virtually all imported Chinese goods if the administration does not get its way.

China imports far less from the United States, making a dollar-for-dollar match on any new US tariffs impossible.

Instead, it has warned of "qualitative" measures to retaliate.

Though Beijing has not revealed what such steps might be, business executives and analysts say it could withhold exports of certain products to the US or create more administrative red tape for American companies operating in China.

Some analysts say there is also a risk that China could allow its currency to weaken again to cushion the blow to its exporters.