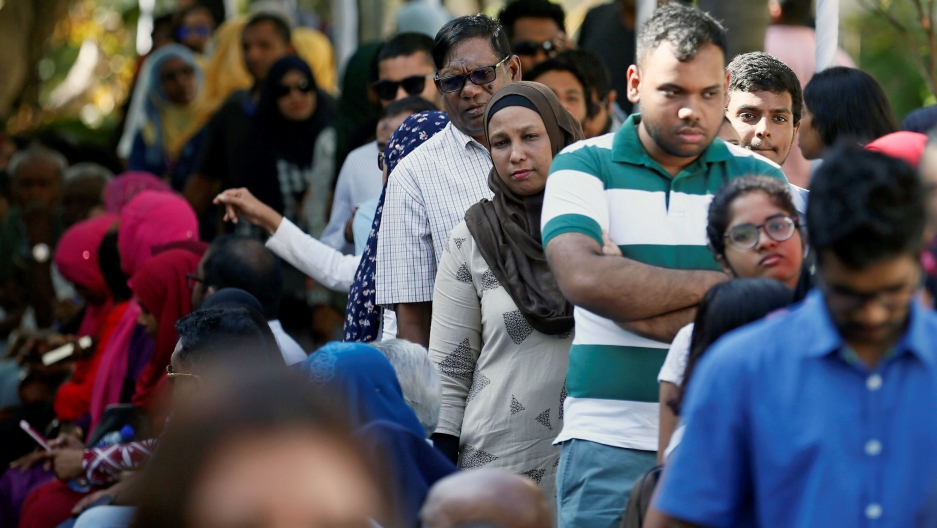 Maldivians living in Sri Lanka stand in a line to cast their vote during the Maldives presidential election day at the Maldives embassy in Colombo, Sri Lanka, on Sept. 23, 2018.

The Maldives extended voting in the presidential election, in which Abdulla Yameen is expected to cement his grip on power, amid criticism over the fairness of the poll in the islands, best known as a luxury holiday destination.

The Indian Ocean nation's Election Commission has extended voting by three hours due to long queues, an official said.

The Muslim-majority Indian Ocean nation has become a theater of rivalry between its traditional partner, India, and China, which has backed Yameen's infrastructure drive, and prompted concern in the West about Beijing's increasing influence.

Yameen's government has jailed many of his main rivals, including former president and his half-brother, Maumoon Abdul Gayoom, on charges ranging from terrorism to corruption.

More than a quarter of a million people were eligible to vote in around 400 polling booths across the coral islands. Yameen, 59, is seeking a second five-year term.

Hundreds of people queued outside polling stations in the capital, Male, early on Sunday. On some islands, people started queuing on Saturday night.

"I am voting to revert a mistake I made in 2013. I am voting to free President Maumoon (Gayoom)," Nazima Hassan, 44, said after voting in Male.

Abdul Rasheed Husain, 46, in Male said he cast his ballot for Yameen to take the Maldives "to the next level".

In the polling booth at the Maldives embassy in Colombo, some voters had to wait for more than seven hours and hundreds of voters were still queuing.

"Last time was much faster and much easier, but this time it's a mess," 20-year-old student Ibrahim Rafeek said.

Ahamed Ihusan, a 24-year-old business management student, said that "if it is a free and fair election, the opposition will win."

Many opposition supporters blamed the Election Commission for the delay.

"Yameen is trying to frustrate voters by having a shoddy process for the elections and a long waiting time of 6-8 hours in some stations. I appeal to all to be patient and not step back," an opposition supporter said, asking not to be named.

British Ambassador James Dauris wrote on Twitter that it was "easy to understand why so many people are concerned about what might happen on Election Day".

Most poll monitors, including those from the European Union and the United Nations, declined the government's invitation to observe the election, fearing their presence might be used to endorse Yameen's re-election even after possible vote rigging.

Transparency Maldives, one of the few election monitors on the ground, said the vote had gone smoothly.

"Observers concluded that the polling stations were set up to ensure a secret vote in the vast majority of cases (99 percent). This was less clear in about 1 percent of all cases observed. These polling stations will be closely watched," the independent organization said.

"I appeal to everyone not to allow any space for unrest tomorrow," he told a rally on Saturday. "Let the voting end peacefully and let the people decide what they want. The people are hungry for a change."

Yameen also urged voters to head to the polls and said he was confident of the work he had done in his first term in office to put the nation on a path of development.

The country has been in political turmoil since February, when Yameen imposed a state of emergency to annul a Supreme Court ruling that quashed the convictions of nine opposition leaders, including Mohamed Nasheed, the country's first democratically-elected leader and former president.

Yameen has disregarded calls from the United Nations, several Western countries and India for an amicable solution to the crisis.

Ahead of the vote, Human Rights Watch urged foreign governments to press the Maldives to uphold democratic rights.

"Should the Maldives government fail to do so, they should impose targeted sanctions, such as those proposed by the European Union, against senior ruling party officials implicated in abuses," the New York-based group said in a statement.