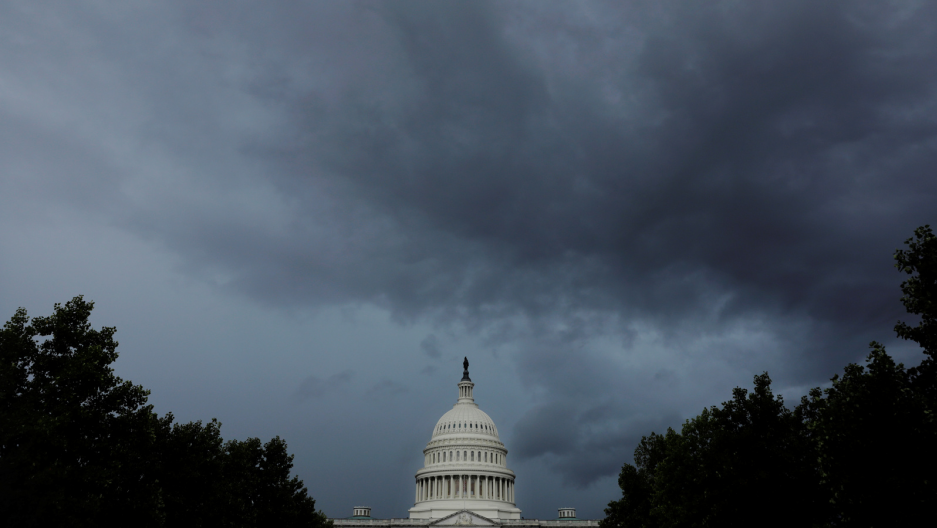 Storm clouds swirl over the US Capitol building in Washington, DC, July 25, 2018.

For the first time, US Senate candidates must file campaign finance reports electronically, giving the public more immediate access to information about the candidates' campaign donors and spending.

President Donald Trump signed the measure into law today during a visit to Las Vegas.

Until now, Senate candidates — unlike candidates for the US House or presidency — filed campaign finance disclosures on paper, and their reports often ran for thousands of pages. The Federal Election Commission was forced to convert those paper reports into digital, searchable data using a complicated process that typically took weeks to complete and cost taxpayers nearly $1 million annually.

"This legislation [...] provides more accurate information to the public, faster, all while saving taxpayer dollars,” said Meredith McGehee, executive director of nonpartisan campaign reform organization Issue One. “Moreover, it is important to remember that the purpose of disclosure was best expressed by Supreme Court Justice Louis Brandeis who said, 'Sunlight is the best disinfectant.' These kinds of disclosure are the necessary building blocks of free, open and accountable democracy."

Related: Five years ago, the Federal Election Commission’s top lawyer resigned. No permanent replacement has yet been named.

Said Sheila Krumholz, executive director of the nonpartisan Center for Responsive Politics: “This is fantastic news, and it should have happened a long time ago.”

The campaign finance disclosure provision, passed earlier this month by Congress as part of a larger spending bill, comes after years of lobbying by transparency advocates and the FEC itself.

FEC spokesperson Judith Ingram told the Center for Public Integrity that although the spending bill is a temporary measure, the Senate e-filing provision represents a permanent change to federal election law. Marnee Banks, a spokesperson for Sen. Jon Tester, the Montana Democrat who for years has sponsored stand-alone bills to mandate Senate e-filing, confirmed that the provision is a "permanent fix."

The provision also comes two weeks after an investigation by the Center for Public Integrity found that errors were 10 times more prevalent in FEC data from digitized paper documents than in data that was originally filed electronically.

The Center for Public Integrity identified almost 6,000 of these errors in two years of data from paper documents.

In one example, federal records said a US Senate candidate, Bill Bledsoe, who was running as a Libertarian in South Carolina, spent $613,638 on gas. His campaign finance report correctly said he spent $36.19, but when it was turned into digital data, a six-digit ID number was erroneously recorded instead of the dollar amount.

The same mistake was made with more than 100 other records, the Center for Public Integrity’s analysis found.

The “vast majority” of US Senate candidates track their finances electronically, but the old law nonetheless required them to print them out and file the paper.

The office of the Secretary of the Senate scanned these documents and sent the images to the FEC. To turn the scans into searchable digital data, the FEC used software that depended on Captricity, a data conversion firm based in California, to transcribe the scanned documents.

Captricity’s service partially relied on workers to enter US Senate candidates’ financial information by hand. This work was administered through Amazon’s Mechanical Turk platform and, the Center for Public Integrity estimated, workers were paid well below the federal minimum wage. The data conversion work was available to almost anyone, including laborers from foreign countries. Captricity did not respond to requests for comment.

The US Senate e-filing law follows a long history of failed reform efforts. The House has required e-filing since 1995. There have been bills to mandate Senate e-filing in every legislative session since 2003, all failed.

For several years, the bipartisan FEC — divided along ideological lines on many issues — unanimously recommended to Congress that it adopt e-filing for US Senate candidates.

"This reform has been a long time coming. It's a big win for taxpayers and transparency,” FEC Vice Chairwoman Ellen Weintraub, D, said in a statement. “I’m delighted that the FEC will not only save close to a million dollars a year processing these reports, but we’ll be able to get them out to the public in a much more timely and accurate fashion.”