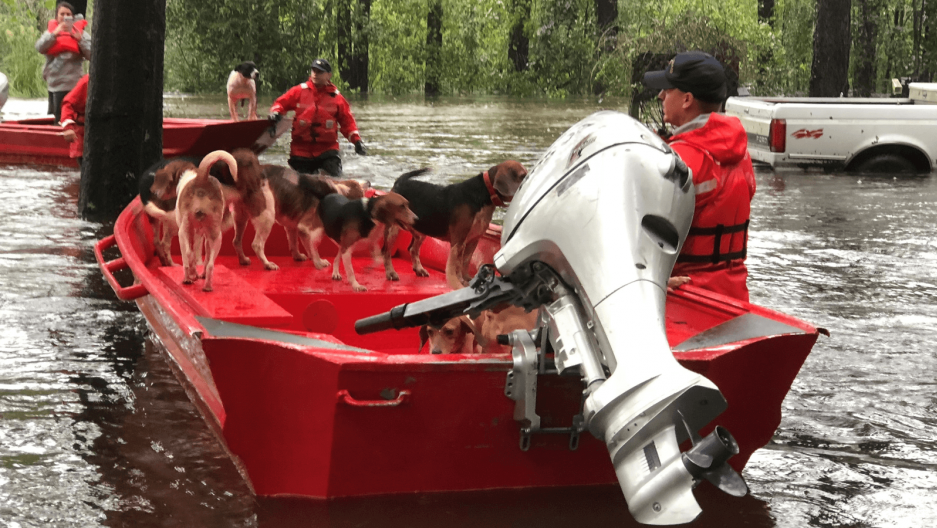 Soon after my family moved to New Orleans in the summer of 2005, we heard Mayor Ray Nagin’s first warnings about Hurricane Katrina. With two young children, a job I hadn’t started yet and little in the way of savings, my wife and I couldn’t wrap our heads around leaving our freshly furnished home to spend money on a hotel in some distant city. So we ignored the call for evacuation.

As our neighbors began to pack up and head out, we figured they were overreacting. Then relatives began to make increasingly frantic phone calls and Kathy, a member of our religious community, dropped by at midnight to persuade us to leave. We got in our van around 3 a.m., some 12 hours before the rain began to fall.

Many deaths that occur due to flooding, fires, hurricanes, mudslides and other disasters could be prevented if more people left vulnerable areas in time — as my family did at the last minute. But people don’t always move, even after the authorities order their evacuation and warn them about imminent risks.

Related: Why hurricane forecasters can’t ‘politicize’ storm warnings even if they wanted to

Since evacuating from New Orleans in 2005, I have traveled to vulnerable communities around the world to study how people get through and bounce back from major catastrophes. Through research in Japan, India, Israel and the Gulf Coast, I have sought to capture the factors that create resilience.

Given that evacuation almost always saves lives, I wanted to understand why people often don’t leave in the face of danger. To do so, I teamed up with colleagues, including some who work at Facebook, to analyze evacuation patterns based on information that people shared publicly on social media before, during and after hurricanes. We found that social networks, especially connections to those beyond immediate family, influence decisions to leave or stay in place before disasters.

Many communities that are vulnerable to disasters put a lot of resources into providing residents with early warnings. For example, in Montecito, California, during the January 2018 mudslides, local authorities and disaster managers tried to warn residents through channels that included emails, social media alerts, press releases and deputies going door to door. Despite these efforts, not all residents evacuated, and nearly two dozen lost their lives.

Traditionally, much emphasis has been placed on the role of physical infrastructure preparedness during a crisis. But in light of findings about the importance of social capital during crises, our team wanted to better illuminate human behavior during these events.

Related: If you shelter in place during a disaster, be ready for challenges after the storm

To understand evacuation behavior, social scientists have typically asked survivors weeks or even years after an event to recall what they did and why. Other researchers have waited at rest stops along evacuation routes and directly interviewed evacuees fleeing oncoming hurricanes or storms. We wanted to better capture nuances of human behavior without having to rely on memory or catching people as they stopped for gas and coffee.

We want to keep you in the loop with all of the info you need in Summit County. Sign up at https://t.co/5GLR9VPCN0 for messages relating to evacuation notices, utility outages, water main breaks, wildfires, floods and hazardous materials spills. #SumCO #COReady #ExploreSummit pic.twitter.com/fr6LTu0tIt

To do so, we worked alongside researchers from Facebook using high-level, aggregated and anonymized summaries of city-level data before, during and after a disaster to construct the outcome variables “Did you evacuate?” and “If you did, how soon after the disaster did you return?”

Facebook engages in numerous academic collaborations across engineering, business and research disciplines. We believe that our research team is among the first to study the movement of so many people across multiple disasters using geolocation data.

Based on research showing that social ties provide resilience to people during crises, we suspected that social capital might be a critical factor in helping people decide whether to stay or go. By social capital, we mean people’s connections to others and resources available to them through their social communities, such as information and support.

Some aspects of these resources are reflected through social media. With this in mind, we set out to study whether attributes of people’s social networks impacted evacuation behavior.

We looked at three different types of social ties:

Our research — forthcoming in a peer-reviewed journal — indicates that, controlling for a number of other factors, individuals with more connections beyond their immediate families and close friends were more likely to evacuate from vulnerable areas in the days leading up to a hurricane.

We believe that this happens for several reasons. First, people with more bridging ties have far-reaching social networks. Those networks, in turn, may connect them to sources of support outside of areas directly affected by disasters. Second, people with more bridging ties may have built those networks by moving or traveling more, and thus feel more comfortable evacuating far from home during a disaster.

In contrast, we found that having stronger bonding ties — that is, family and friends — made people less likely to evacuate leading up to a hurricane. In our view, this is a critical insight. People whose immediate, close networks are strong may feel supported and better-prepared to weather the storm.

One North Carolina woman, trying to explain why she wasn’t leaving her vulnerable coastal home as Hurricane Florence approached, told a reporter that she didn’t want to leave family and friends unprotected. And staying in place could have positive outcomes, such as a higher likelihood of rebuilding in existing neighborhoods.

But it is also possible that seeing relatives, close friends and neighbors decide not to evacuate may lead people to underestimate the severity of an impending disaster. Such misconceptions could put people at higher immediate risk and increase damage to lives and property.

This is an updated version of an article originally published on July 16, 2018.

Danaë Metaxa, a PhD student in computer science at Stanford University, and Paige Maas, a data scientist at Facebook, contributed to this article.

Daniel P. Aldrich is a professor of political science, public policy and urban affairs and director of the security and resilience program at Northeastern University.