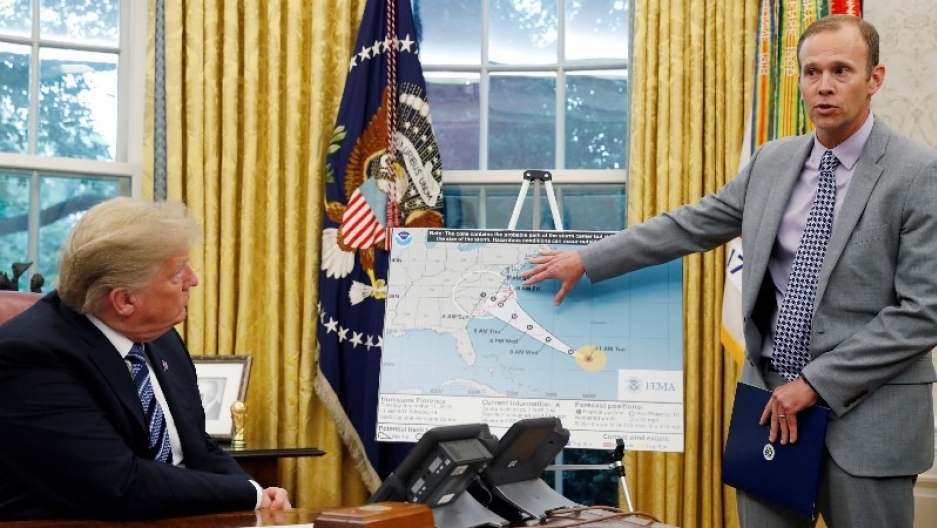 US President Donald Trump holds an Oval Office meeting on hurricane preparations as FEMA Administrator Brock Long points to the potential track of Hurricane Florence on a graphic at the White House in Washington.

Dr. Marshall Shepherd of the University of Georgia famously talks about “climate zombie myths”: No matter how many times you slay them, they keep coming back.

In 2016 conservative news blogger Matt Drudge accused the federal government of hyping the threat as Hurricane Matthew approached the US coast, purportedly to play up possible links between extreme weather and climate change. I explained how this not only was false, but that it would be impossible for the National Hurricane Center to manipulate hurricane forecasts in a political manner, given that all the raw information is accessible to anyone today with an internet connection.

Apparently, Rush Limbaugh did not read the article, for he has made very similar claims regarding forecasts for Hurricane Florence. A simple reading of warnings and key messages from the National Hurricane Center (NHC) shows a very different reality.

Anyone living in the Carolinas should take this storm extremely seriously. Florence will produce a large and dangerous storm surge. It is a very large hurricane, like Hurricane Katrina in 2005. It is slow-moving, like Hurricane Harvey in 2017, and will drop prodigious amounts of rain on the Southeast. The National Hurricane Center’s “Key Messages” cogently summarize these life-threatening hazards.

Nonetheless, US government forecasters downgraded Florence from Category 3 to Category 2 as it approached the coast on Sept. 12. They did so because observations from satellites, aircraft and ocean buoys showed the storm was a Category 2 hurricane – no more, no less.

Moreover, it would be virtually impossible for our government, or any weather service, to intentionally overhype or downplay the real risks of a major hurricane as it approaches the United States.

I have been involved with operational weather forecasting for nearly 40 years. From 2005 through 2009, I was responsible for typhoon forecasts that the Defense Department’s Joint Typhoon Warning Center, issued for the western Pacific and Indian oceans. After retiring from the Navy, I served as chief operating officer for the National Oceanic and Atmospheric Administration. In this position, I was responsible for the National Weather Service and its components, including the National Hurricane Center.

During my career I have seen the internet and social media transform weather forecasting in general, and hurricane forecasting in particular, from a skill that was seen and practiced by a small community of specialists into one of the most transparent technical endeavors we do on a routine basis. Every forecaster I have ever worked with – military or civilian – wants to get predictions right. And even if they wanted to shade the forecast one way or another to support some agenda, it would be impossible to do it in today’s networked world.

The weather community opens up

In the pre-internet era, hurricane forecasting was more of an art than a science. Modern weather forecasting developed in the 1960s with the advent of radar, computers and satellites. Well into the 1980s, forecasters were still working out how best to integrate satellite data into computer-based forecasts. Satellite measurements and computing power were crude by today’s standards.

Observations and computer prediction models traveled on government-only, proprietary circuits, with only limited access by private forecasters or academia. Government forecasters would share storm track and intensity forecasts with the public, along with short written discussions (TRANSMITTED IN ALL CAPS), but little else. Processes for deriving forecasts were closely held, available only to members of a very select and specialized guild. Private-sector forecasting of hurricanes was in its infancy, hampered by a lack of real-time information.

A high definition camera outside the International Space Station captured a view of Hurricane Florence at 7:50 a.m. EDT on Sept. 12.

Starting in the 1990s, personal computers, dial-up access and then the internet fundamentally changed the way weather information could be accessed and distributed. Today global weather models from the United States, Canada, United Kingdom and the European Centre for Medium Range Weather Forecasting are available to anyone with an internet connection. When the NHC directs US Air Force Reserve personnel or NOAA “Hurricane Hunters” to fly a hurricane reconnaissance mission, the data they collect are posted virtually in real time. Satellite images from the JTWC or NHC forecast are available online free of charge.

For hurricanes, the federal government produces one official forecast from either the National Hurricane Center for the eastern Pacific and Atlantic oceans or the Joint Typhoon Warning Center for the western Pacific and Indian oceans. This forecast draws on computer-based weather forecast models, an assessment of the storm’s real-time characteristics, and the knowledge of a highly trained typhoon duty officer or hurricane specialist. It would be obvious instantaneously if it deviated substantially from observed conditions, or from a blend of the computerized forecast guidance, without providing some meteorological or physical explanation.

This level of transparency is fairly new. As recently as the early 2000s, there were significant and sometimes emotional debates within the weather forecasting community over how much computer modeling data and information from weather observations should be publicly available in real time. Some forecasters worried, and still do now, that users could misinterpret individual pieces of data or second-guess official forecasts. Over time, however, consensus has grown in favor of making all the data available to anyone interested, so that everyone can see how forecasts are put together.

Forecasting hurricanes in the internet era

Now that so much weather data is publicly available, the explosion of social media guarantees that thousands of observers are looking over forecasters’ shoulders. And forecasts get a lot of attention, especially when they involve extreme events.

Hundreds of people with varying credentials comment on every tropical storm, hurricane or cluster of thunderstorms. Popular sites like Weather Underground and Windy further attest to broad public interest in all things meteorological. 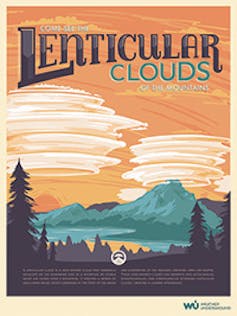 If US government forecasters appeared to be disregarding either observations or reliable forecast models without explanation, weather enthusiasts would quickly point this out on social media, and major news media would pick up the story. We don’t see this in headlines because it doesn’t happen.

Weather forecasters understand that they walk on a knife’s edge between over-warning on the one hand – which can produce false alarms and complacency – and under-warning on the other, potentially trapping people in life-threatening situations. The National Hurricane Center, backed by a national and international network of observers, scientists and computer models, does amazing work under very high pressure. There always are lessons to be learned, but the bottom line is that we owe them thanks, and Mr. Limbaugh owes them an apology.

This is an updated version of an article originally published on October 12, 2016.