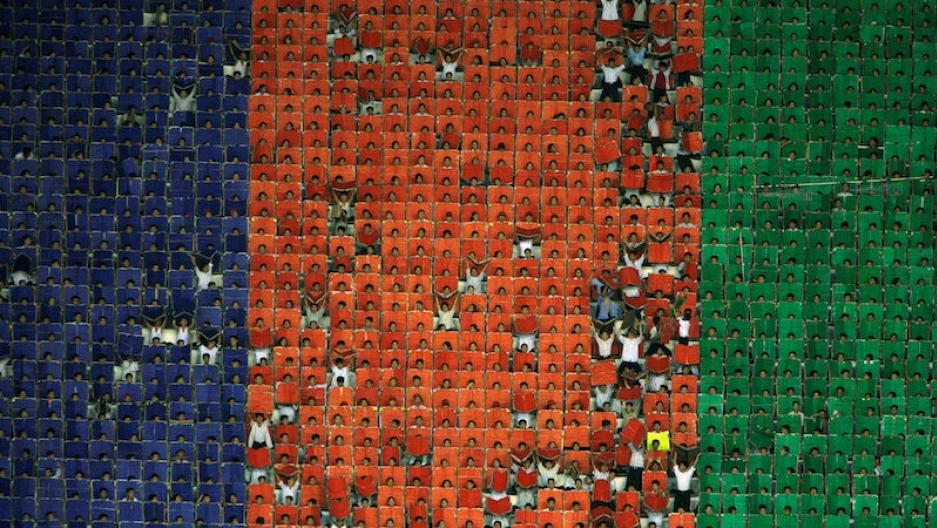 North Koreans students use different colored cardboards to form the background pictures during the country's famed Mass Games at the May Day stadium in central Pyongyang, North Korea in 2007.

For the first time in five years, North Korea is expected to put on a massive performance on Sunday known as the "Mass Games."

With thousands of twirling gymnasts and dancers backed by an ever-changing display of images and words glorifying the North Korean state and its people, past Mass Games have produced some of the most iconic images of the isolated country.

Sunday's Mass Games will be one of several high profile events, including a military parade, to mark the 70th anniversary of the founding of North Korea. It will kick off a month of events designed to lure foreign investment, attract tourists, and showcase Kim's new focus on the economy.

Here is how analysts and observers who have attended past games and study North Korea describe the pageants.

What are the Mass Games?

Despite their name, North Korea's Mass Games are a huge art and dance performance, similar to opening and closing ceremonies for the Winter or Summer Olympics.

The games have come in various versions over the years, with shows emphasizing different historic, economic, political, and cultural themes.

Up to 100,000 people are mobilized to perform during the show, an undertaking designed to demonstrate social unity, analysts say.

But critics say the games white-wash North Korea's human rights record, and testimonies collected by the defector-run website Daily NK have described months of harsh training for school children involved in past events. Families of participants often received rare items such as color TVs, and some people compete for the chance to perform, which helps limit complaints, he said.

The shows are usually performed in Pyongyang's cavernous 1st of May Stadium, said to be one of the largest stadiums in the world.

Gymnasts and dancers performed on the field, while thousands of school children sitting in the stadium's seats used colored flip books to create huge, shifting displays of images and words.

The main theme of the most famous of the Mass Games, Arirang, was the glory of the nation that North Koreans had built after the horrors of Japanese occupation and the 1950-1953 Korean War, said Simon Cockerell, general manager of the tour agency Koryo Tours, who attended multiple mass games between 2002 and 2013.

"For many North Koreans who went, it was quite touching," he said.

What are they about?

"Mainly they serve to reinforce the national story while simultaneously demonstrating very high levels of skill and coordination," he said, comparing the Mass Games to the United States' football Super Bowl, with its celebrations of "heroism, the military and advertising and commerce."

Although North Korea is scheduled to stage a large military parade in Pyongyang on the same day as the opening of the Mass Games, military messages may be less of a focus, they say.

After having declared his country's nuclear program "complete," Kim said this year he would stop testing weapons and make all-out efforts toward economic development.

"In the past the big theme was anti-Americanism and anti-imperialism, but this time ... they might talk more about economic achievements rather than being hostile and accusatory to other countries," said Lee Woo-young, a professor at the University of North Korean Studies in Seoul.

"They will emphasize how peace-loving they are and willing for coexistence."