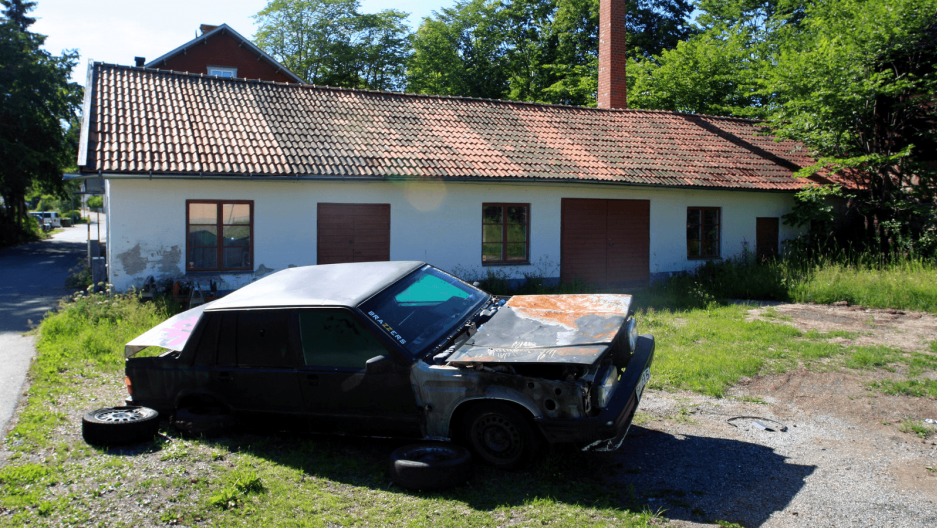 An abandoned car is seen next to the school building in Kopparberg, Sweden, June 26, 2018.

Those wondering why Swedish politics are set to lurch to the right in Sunday's election need look no further than Ljusnarsberg, a tiny central county of dense pine forests and glistening lakes.

Many inhabitants of this once-booming region are uneasy about asylum-seekers after a large number arrived here in 2015. Some also feel that Sweden's widely admired tax and welfare model has left them behind.

Fears over globalization's effect on industrial jobs, the pressure of an aging population and a failure to integrate minorities have boosted right-wing and anti-establishment parties from Italy and Germany to Britain and the United States.

Polls indicating one in five voters in Sweden are likely to back a party with roots in the far-right fringe on Sept. 9 show that even seemingly successful political systems are vulnerable.

They are likely to do particularly well in Ljusnarsberg where they won a quarter of the vote in 2014, double their national score.

"I think people here want to see a change, they want society to be like it used to be," said Mats Larsson, the Sweden Democrat's top politician in Ljusnarsberg.

Most people in the county live in Kopparberg, where the 17th century church, with its blood-red, wooden facade and spires, hints at the region's rich past, built on copper and iron mines.

For many years, the area was a heartland of the ruling Social Democrats. Its swing to the right highlights election themes of asylum and a split between poor rural or suburban areas home to immigrants and wealthy places like Stockholm.

Ljusnarsberg's mines have gone - the last closed in the mid-1970s. Unemployment at the end of last year was nearly 13 percent, almost double the national level. Many live on sickness benefits, masking the figures of those relying on welfare.

As jobs have disappeared, so have people. The population has roughly halved in the last 50 years and many services have been centralized to Orebro, an hour's drive south of Kopparberg.

"The 1970s and 1980s were a fantastic time to grow up here in this county. Now everything is falling to pieces," said Leif Danielsson, 53, a businessman in Kopparberg, the county's only sizable town.

"Houses are rotting, some places are overgrown with weeds. If you have any education or contacts, you leave."

While Kopparberg retained its health clinic, it has been unable to recruit permanent doctors, with temporary staff filling the gap.

Decades of closures have left Kyrkbacks school in Kopparberg as the only school for 6-15 year-olds in the region. It has also had problems recruiting staff and was rated as one of Sweden's worst by the teachers' union, long before asylum numbers jumped.

When Sweden took in 163,000 asylum-seekers in 2015 as hundreds of thousands fled war in Syria and Afghanistan, Ljusnarsberg was assigned around 1,200, the highest concentration compared with its population.

Many of the new arrivals were unaccompanied minors, and the influx stretched services to the limit.

Anne-Marie Hagglund, assistant headteacher of Kyrkbacks school, said families just showed up with their migration papers. "They came back day after day until we could take in their children," she said.

All but 260 of the refugees have now gone — mostly assigned to other areas by the Migration Agency — yet the unease remains.

Sitting in a cafe on the town green in Kopparberg, personal assistant Ulrika, 44, said that since the arrival of so many asylum-seekers, women are afraid to walk the streets at night.

"There are lots of robberies. I think a lot of it is to do with immigration," she said, declining to give her surname.

Police say the number of reported crimes fell in 2017 compared to the previous year, though they admit that many crimes go unreported. After cutbacks, the nearest police station is in Lindesberg, 25 miles away.

"Of course, we should help people," said Staffan Myrman, 53, who works at the Kopparberg brewery, one of the two major employers in the Ljusnarsberg region.

"But when 25-30 percent of the population are refugees, we need to be able to cope with that and we can't."

Sweden took in more asylum seekers than any other European country per capita in 2015. But while worries over immigration explain some of the Sweden Democrat's gains, unease about economic and social change also plays a role.

"It is a target to point your anger at," said Ljusnarsberg Liberal party politician Hendrik Bijloo. "Of course there are racists voting for the Sweden Democrats, but they are not even close to a majority."

It is not just rural areas like Ljusnarsberg where the Sweden Democrats have thrived.

A spate of gang killings and car-burnings have sharpened concerns that authorities are losing control in poorer city suburbs where immigrants make up the majority of the population.

But welfare is also a big theme, despite that fact that Sweden is one of Europe's richest countries, with strong growth and low unemployment.

"This election is a referendum on welfare or whether we have continued asylum immigration. I choose welfare," Sweden Democrat leader Jimmie Akesson said in a televised election debate.

The center-left government and main opposition Moderate Party both plan to spend an extra 20 billion Swedish crowns ($2.19 billion) over the next four years.

Despite those plans, and already higher spending, many Swedes believe the welfare system is in crisis.

Sweden scores highly in the quality of healthcare — for example, more Swedes are alive 30 days after a heart attack than in other European countries, according to a 2015 study.

But a growing and ageing population means waiting lists for operations have grown and half of health centers have to cover doctor shortages with temporary staff, according to a report by the Swedish Agency for Health and Care Services Analysis.

Since 2000, 16 percent of maternity units have closed, a Swedish television report showed. Many women travel more than 60 miles to give birth, while schools need to recruit around 77,000 teachers over the next five years.

Inequality, measured by the Gini coefficient, has grown faster in recent years in Sweden than in any other industrialized nation, although the country remains among those where income is most evenly distributed.

This partly explains why mainstream parties' shift to tougher immigration policies after the 2015 crisis has failed to win back disillusioned voters.

Many locals in Ljusnarsberg are resentful about what they see as preferential treatment for immigrants.

"They get a better deal, all of them, at the dentist, with the doctor, they are first in the queue always," said 65-year-old pensioner Torbjorn Lundgren. "That makes me angry."

Asylum-seekers get subsidized welfare, housing and 71 crowns ($7.79) a day for food and other essentials, including healthcare. Healthcare costs are capped at 400 crowns over a 12 month period. For Swedish citizens the cap is 1,100 crowns.

"It's not the immigrants fault, it's the politicians," said pensioner Torbjorn Lundgren, who backs the Sweden Democrats.

"I'm going to vote for them, then we'll see if things change or not."