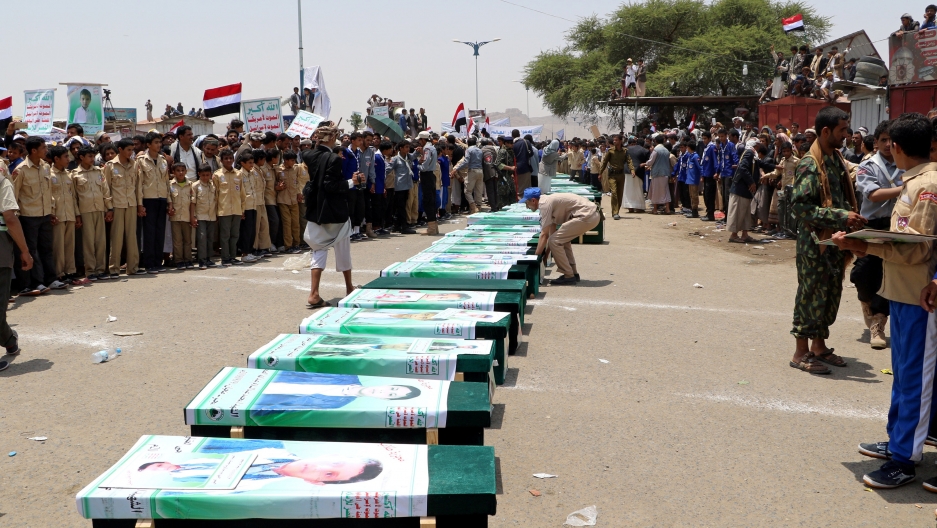 Mourners attend a funeral of people, mainly children, killed in a Saudi-led coalition air strike on a bus in northern Yemen, in Saada, Yemen, August 13, 2018.

A Saudi-led coalition in Yemen said on Saturday it accepted that an air attack last month that killed dozens of people, including children traveling on a bus, was unjustified and pledged to hold accountable anyone who contributed to the error.

The rare concession follows mounting international pressure, including from allies, to do more to limit civilian casualties in a 3.5-year civil war that has killed more than 10,000 people and pushed the already impoverished country to the brink of famine.

The Western-backed alliance fighting the Iranian-aligned Houthi group in Yemen said at the time that the Aug. 9 air strikes at a market in Saada province had targeted missile launchers used to attack southern Saudi Arabia a day earlier and accused the Houthis of using children as human shields.

The Joint Incident Assessment Team (JIAT), an investigative body set up by the coalition, said on Saturday that the strikes had been based on intelligence indicating the bus was carrying Houthi leaders, a legitimate military target, but delays in executing the strike and receiving a no-strike order should be further investigated.

"There was a clear delay in preparing the fighter jet at the appropriate time and place, thus losing (the opportunity) to target this bus as a military target in an open area in order to avoid such collateral damage," JIAT legal advisor Mansour Ahmed al-Mansour told reporters in the Saudi capital.

"The team believes that the coalition forces should immediately review the application of their rules of engagement to ensure compliance," he added.

The coalition later announced that it accepted those findings and pledged to hold accountable anyone who was proven to have made a mistake.

"The Joint Forces Command of the Coalition expresses regret over the mistakes, extends its sympathies, condolences and solidarity to the families of the victims," said a statement carried by the Saudi state news agency SPA.

The coalition said it would coordinate with the Yemeni government to compensate victims and would continue reviewing the rules of engagement to prevent the repeat of such incidents.

The US military welcomed the decision and said it appreciated the coalition's decision "to take legal measures to ensure accountability and make the necessary improvements to its Rules of Engagement to prevent such a tragedy in the future."

"The #DoD welcomes the #Saudi-led #Coalition’s announcement of the investigation findings of the targeting incident of August 9, 2018," Pentagon spokeswoman Dana White said in a series of tweets on Saturday.

Last week, a UN panel of human rights experts said that some coalition air strikes may constitute war crimes. In Washington, Secretary of Defense Jim Mattis said US support for the Saudi-led coalition was not unconditional, but suggested the United States would continue to support the alliance as it works to reduce fallout on civilians.

The war has so far garnered relatively little public attention in Western countries, but there are signs that is starting to change, particularly because of the role Western governments play in supplying arms to the coalition countries.

Saudi Arabia is leading an alliance of Sunni Muslim Arab states trying to restore the internationally recognized government of Yemeni President Abd-Rabbu Mansour Hadi, ousted from the capital, Sanaa, by the Houthis in 2015.

The Houthis, who control the capital and most of the west of the country, regularly fire missiles on southern Saudi Arabia and occasionally aim for higher-value targets, such as the capital Riyadh or facilities of state oil company Aramco.

The United Nations has convened talks in Geneva on Sept. 6, the first effort to negotiate the war in more than two years.