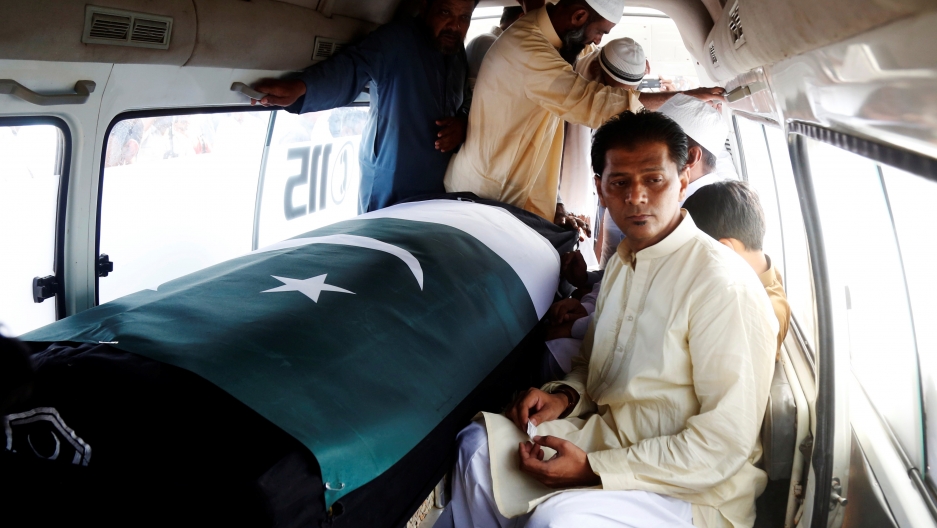 Aziz Sheikh, father of Pakistani exchange student Sabika Aziz Sheikh who was killed with nine others when a gunman attacked Santa Fe High School in Texas, sits in an ambulance next to her coffin, wrapped in the national flag, during her funeral in Karachi, Pakistan, on May 23, 2018. Sheikh’s cousin, Shaheera Jalil Albasit, is also an exchange student at a US university and arranged for the body to be returned home.

Before Santa Fe High School started its school year in August, school officials fortified the building with new metal detectors and panic buttons in every classroom. That’s because in May, an armed student killed eight classmates and two teachers.

Some parents are calling for even more security at the school near Houston, Texas, but one of the family members of the victims wants a different kind of change.

On August 4, in front of the National Rifle Association Headquarters in Virginia, Shaheera Jalil Albasit stepped to the microphone to address dozens of protesters, many of whom have lost family or friends in school shootings. She clutched a photo of her cousin, Sabika Sheikh, who was one of the eight students murdered at the school.

Our last speech was from @shaheerajalil who’s from Pakistan and lost her cousin Sabika in the Santa Fe shooting. She held a picture of her cousin as she spoke. #MarchOnNRA pic.twitter.com/0lkk8QPtxQ

“Dear NRA leaders, do you know how it feels?” Jalil Albasit asked. The revolver and shotgun used in the school shooting were purchased legally by the shooter’s father. Jalil Albasit says she’d like to see the NRA’s leaders support universal background checks.

Also: How other countries can help us understand America's mass shooting crisis

While students in the US have become familiar with school shootings, Jalil Albasit, and her cousin arrived from Karachi, Pakistan, as exchange students in 2017. Jalil Albasit is a Fullbright scholar at George Washington University, and Sheikh was on a high school exchange program for students from Muslim-majority countries. Both programs are US government-sponsored and seek to build relationships between the US and the rest of the world.

Jalil Albasit said her cousin wanted to be a diplomat in Pakistan’s foreign service, and studying in the US was a first step. In a video she posted online, Sheikh talked about how excited she was to be accepted to the program.

“I was, like, over the moon. I wrote a diary entry that day because it was very special for me,” she said.

When Sheikh got to Texas she fit right in with her host family, who shared a video on social media of her showing them how to wear hijab.

Then, on May 18, as she was about to introduce her US friends and family to Ramadan, and just weeks before returning to Pakistan, the shooting happened, and Sheikh was gone.

Jalil Albasit flew from Washington, DC, to Houston to arrange for her cousin’s body to be returned to Karachi. After Sheikh’s funeral in Pakistan, she had tough conversations with her family about living in the US, and their worries about gun violence.

But Jalil Albasit says she knew she had to return.

“If I did not come back to the US, I would always have a sense of an unfinished chapter,” she says. “I think the center of what happened with her, and the center of the conversation is located in the US.”

Jalil Albasit is back in the US. now, and starting the second year of her studies in public administration at George Washington University. But things obviously aren’t the same. She is putting more of her energy into learning about gun reform and the March For Our Lives movement, a push for new gun legislation led by survivors of last February’s shooting at a high school in Parkland, Florida. She also wrote an essay in the Washington Post about the impact Sheikh’s death has had on her family.

But Jalil Albasit feels less safe on her campus and in general. She is extra vigilant now when she walks to the library, the Metro or goes to a movie.

“Sitting, having a good laugh, go partying, going to a concert — that is the kind of cultural exchange I’m no longer in the mental framework for,” she says.

The fear Jalil Albasit feels at school pains Ann Kerr-Adams, who coordinates Fulbright scholars at the University of California, Los Angeles, and around the region.

Part of Kerr-Adams’ job is to make foreign scholars, like Jalil Albasit, feel at home in the US. She says that between travel bans and safety issues, lately her job has gotten a lot more difficult. 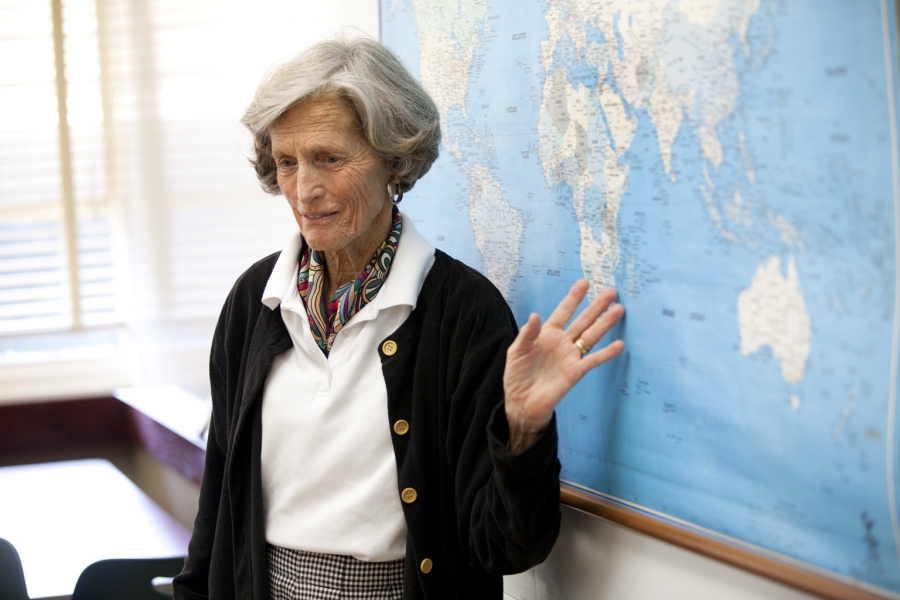 Ann Kerr-Adams teaches international relations seminars at the University of California, Los Angeles, and coordinates the Fulbright scholars program for Southern California. She has been working with students from abroad since the early 90s.

“We’re in a down period right now internationally speaking, pulling in instead of reaching out. But this too shall pass,” she says. Kerr-Adams has worked at UCLA’s International Institute since the early 90s, working with Fulbright scholars and teaching seminars to undergraduates.

Beyond the Fulbright connection, Kerr-Adams shares something else with Jalil Albasit. She knows what it’s like to lose a loved one in a foreign country. Her husband, Malcolm Kerr, ran the American University of Beirut when he was assassinated in 1984 amid civil war in Lebanon.

Kerr-Adams says that experience didn’t make her retreat from the world.

“Lots of people ask me why I go back to the Middle East. I say, it wasn’t people I know who killed my husband. I love the Arab world.”

Kerr-Adams recently announced an endowment for Middle Eastern students to study at UCLA. Some of the money is from a court settlement with Iran over its involvement in Kerr’s death.

“I’m here to mobilize the rest of my time here for Sabika, for this conversation, for this movement, for whatever I can do about it,” Jalil Albasit says.

For starters, Jalil Albasit would like to see a shift in the reluctance by many in the US to refer to school shootings, like the one that took her cousin’s life, as terrorism.

“It becomes meaningless to think that it has to be a political motive of an organization for an act to be called terrorism,” she says.

She grew up at a time in Pakistan where there was a lot of violence, and she learned to define terrorism not by the actors and their motives but how the victim felt. This definition of terrorism, she says, fits what happened to her cousin.

“What Sabika felt in that moment was terror.”

After graduating next year, Jalil Albasit plans to return to Pakistan and work with young people to build peace in the name of her cousin, Sabika Sheikh.

Next: Fewer international students coming to US for grad school in science and engineering