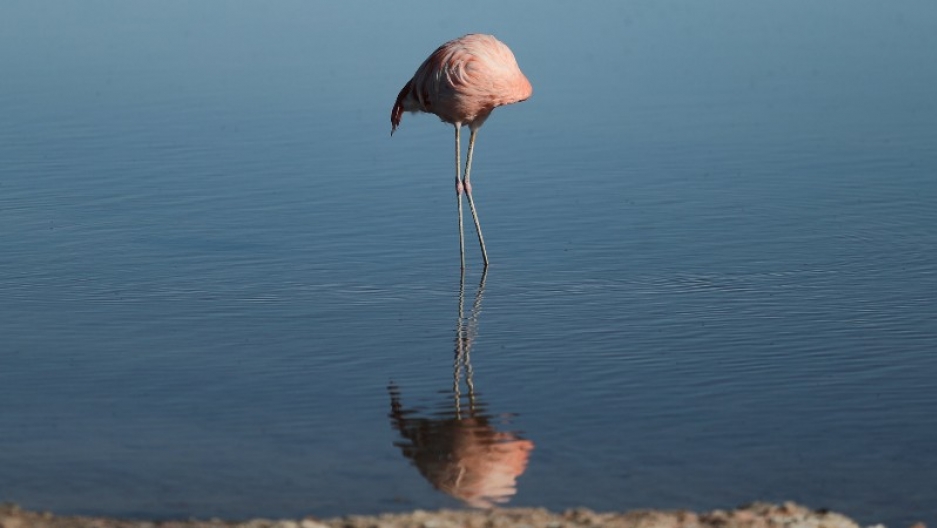 On Chilean water regulator Oscar Cristi's desk, a small white espresso cup teeters atop piles of documents and loose folders that appear on the point of collapse, perhaps an apt metaphor for the growing water crisis in parts of the Andean country.

Sitting in his eighth-floor office adjacent the presidential palace, Cristi, a PhD economist, lays out a map of Chile showing key watersheds for mining. Swaths of the mineral-rich north are colored blue, denoting areas where aquifers are over-exploited.

Soon, if Cristi gets his way, they will be red, meaning new water rights will be banned.

Reams of water rights were granted by Chilean governments over decades with little consideration for their cumulative impact as miners scrambled to stake claims on the small pockets of water available in the salt flats of the Salar de Atacama.

The Salar sits in the world's driest desert. The water trapped beneath the salt pan feeds the world's biggest copper mine and holds in suspension more than one-third of the world's current supply of lithium, the ultra-light metal used in electric car batteries, mobile phones and lap-tops.

With demand for water growing in a region economically vital to the country, Cristi is now taking steps to rein in usage. But there is a problem. No one really knows how much water is there. Cristi said Chilean development agency Corfo, which helps oversee lithium extraction in the Salar, hopes to provide a better picture in a study due in December.

"The state has been very reluctant to draw up bans on water extraction," said Cristi, who was only recently appointed head of the water authority. "We want to take much more diligent approach in decreeing prohibited areas."

Cristi did not say why past governments had been hesitant to declare bans.

In Chile, threats of a government crackdown on over-usage of water often ring hollow. Mines need water, and the country´s copper-driven economy needs mines. A sweeping overhaul of Chile's dictatorship-era water code proposed in 2014 has languished in Congress, slowed by intense lobbying by industry.

Now though, the mining industry is paying close attention to Cristi. Earlier this month his agency imposed a rare ban on new permits to extract water from an aquifer that is a critical water supply for BHP´s Escondida, the world´s largest copper mine.

The agency is also preparing to create a drinking water reserve nearer the operations of top lithium producers SQM and Albemarle that would allow the government to further restrict water use there.

SQM and Albemarle say they have all the water rights they need and do not expect new restrictions to impact their current or future production of lithium.

A global boom in demand for lithium has set off a scramble in Chile, which is home to nearly 50 percent of the world's reserves of the metal.

Local indigenous groups, SQM and Albemarle, regional copper miners and newcomers to the region are all competing for water.

"What we have is a water war in the salt pan. There's a huge crush on water and nowhere to get it from," said Alonso Barros, an attorney with the Atacama Desert Foundation, an NGO that works with indigenous groups in the region.

SQM and Albemarle both recently signed deals with the government to sharply increase their quotas for extracting lithium from the Salar, although they say they will not use any more water than they have already been granted. Newcomers like Wealth Minerals, New Energy Metals, and Lithium Chile have also announced projects in the salt flats.

Wealth Minerals, New Energy Metals and Lithium Chile did not immediately respond to requests for comment.

On a computer screen, Cristi scrolls through a spreadsheet showing row upon row of water rights granted decades ago in the southernmost sector of the Salar, totaling six times more than the government now believes available, with little more than each company's own data to support their sustainability.

Past governments did not adequately map how much water is available, says Cristi. Now monitoring wells are being installed in some areas, but base line data is still lacking.

"Our (understanding) continues to be limited now, but back then, it was very limited," he said.

The cumulative impact of water rights granted over the years to copper and lithium miners in the world's most arid desert has never been considered, according to Ingrid Garces, a professor who studies salt flats at Chile's University of Antofagasta.

"We're managing lithium as though it were a type of hard-rock mining," said Garces. "But we're mining water, not rock. This is a watershed."

Take too much water from one place, she says, and it may impact another, comparing it to sucking water from a glass with a syringe.

"Even if you're drawing from just one area, the whole is still reduced," she said.

Sorting out the water crisis at Atacama is complicated by a lack of data, but also a jurisdiction issue.

The brine from which miners extract lithium is water, but in Chile, it is regulated as a mineral like copper or iron. Environmental regulators handle permits for brine, while the water authority permits freshwater pumping.

A lack of communication between the two, combined with a lack of understanding about how freshwater and brine interact beneath the Salar, has left authorities hamstrung, says Cristi.

"There may be an imbalance that we're not accounting for," he said.