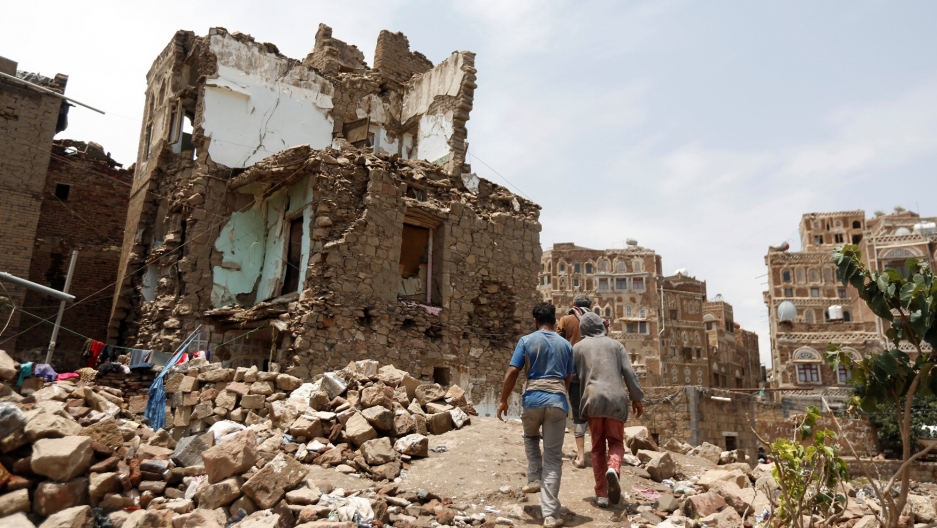 People walk past a house destroyed by an air strike in the old quarter of Sanaa, Yemen, August 8, 2018.

United Nations human rights experts said on Tuesday that some of the air strikes by the Saudi-led coalition in Yemen's war have caused heavy civilian casualties which may amount to war crimes.

Saudi Arabia is leading a Western-backed alliance of Sunni Muslim Arab states trying to restore the internationally recognized government of Yemeni President Abd-Rabbu Mansour Hadi, ousted from the capital Sanaa by the Iran-aligned Houthis in 2015.

Fighters of the Houthi movement have fired missiles into Saudi Arabia, blocked delivery of supplies to Taiz and shelled the strategic city from the highlands, the panel said. They have also committed torture, a war crime, it said.

The coalition's additional inspection procedures at Hodeidah port have had a "chilling effect on commercial shipping," although no UN or coalition searches had discovered weapons being smuggled into Yemen where 8.4 million people are on the brink of famine, it said.

Its investigation of 11 incidents raised "serious concerns about the targeting process applied by the coalition." Strikes that fail to spare people or structures protected by international humanitarian law would be unlawful violations.

"Individuals in the (Yemeni) government and the coalition, including Saudi Arabia and the United Arab Emirates, may have conducted attacks in violation of the principles of distinction, proportionality and precaution that may amount to war crimes," the experts said, adding that they had compiled a confidential list of suspects.

There was no immediate reaction from those governments, which received an advance copy of the report from the United Nations.

All sides have conscripted children between 11 and 17 years and used them to participate in the hostilities, also war crimes, the 41-page report said.

The report was released ahead of UN peace talks between the government and Houthis on Sept. 6 in Geneva.

The panel, headed by Tunisian expert Kamel Jendoubi, neither specifically referred to the United States and Britain, which provide arms and intelligence to the Saudi-led alliance, nor did it point a finger at Iranian support to the Houthis.