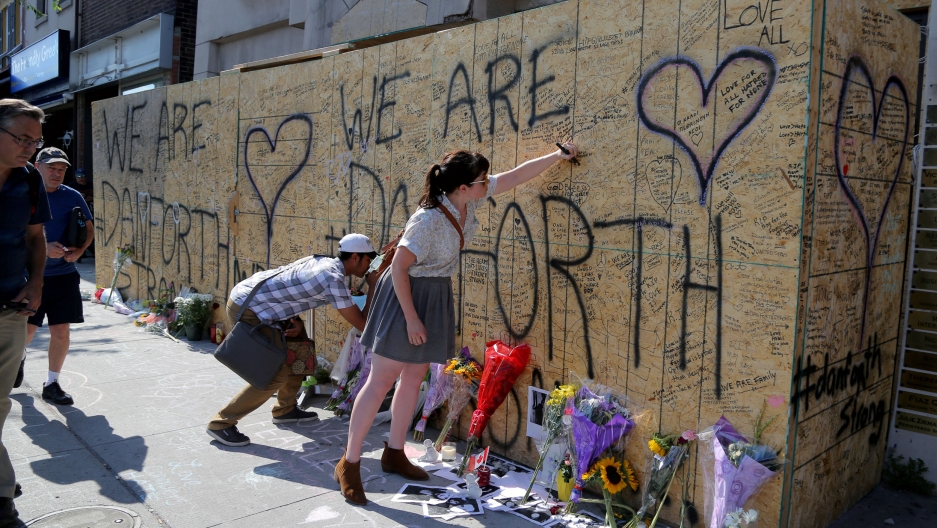 People write messages on construction boarding after a mass shooting on Danforth Avenue in Toronto, Canada, on July 24, 2018. Shooting deaths are rising in Toronto and the rest of the country.

On a Sunday night, Jerry Pinksen and his girlfriend Danielle Kane took a friend out for a birthday dinner. They went to the Danforth, a hip area in Toronto with lots of bars and restaurants.

“And we were out on the patio, and all of a sudden we heard what we thought were gunshots,” Pinksen says. “And we started talking about the recent gun violence that’s been in the city and stuff like that.”

That’s when the restaurant waiters came over and hustled them inside.

“We didn’t hear any sirens, we didn’t know what was going on,” Pinksen says. “And then this woman came up to us who was at the front of the building, was hysterical, and she said ‘I just saw someone get shot.’”

Pinksen felt like he had to help. Both he and Kane are nurses. He waited a few minutes and didn’t hear more gunshots, so he went outside. He looked across the street and saw a man calmly walking. Then he heard a clicking sound like a weapon being reloaded.

“I looked back and I saw him stare at us,” Pinksen remembers. “He threw his arms up in the air and pointed the gun at us, and he started firing.”

Pinksen ducked. Bullets were flying over his head. He didn’t think to look behind him. So he didn’t realize Kane had followed him out of the restaurant.

“I didn’t know until I heard her scream and then I was just like, ‘Oh, my God,’” Pinksen says.

She was lying in a doorway. Pinksen dragged her inside and told her to breathe.

“I was scared and then I realized I can’t — I had to keep her talking, keep her alive. Because I still need her here. I can’t go without her,” he says.

Kane had been shot in the spine. The gunman, 29-year-old Faisal Hussain, injured others and killed an 18-year-old woman and 10-year-old girl before dying in an exchange of gunfire with police.

His parents say Hussain had a history of mental illness. Police say he wasn’t connected to terrorists. They haven’t said where Hussain got the handgun.

For lots of people in Toronto, that night at the Danforth confirmed a troubling pattern: Gun deaths are increasing in the city. They've nearly doubled in the last four years. There have been 30 so far this year. 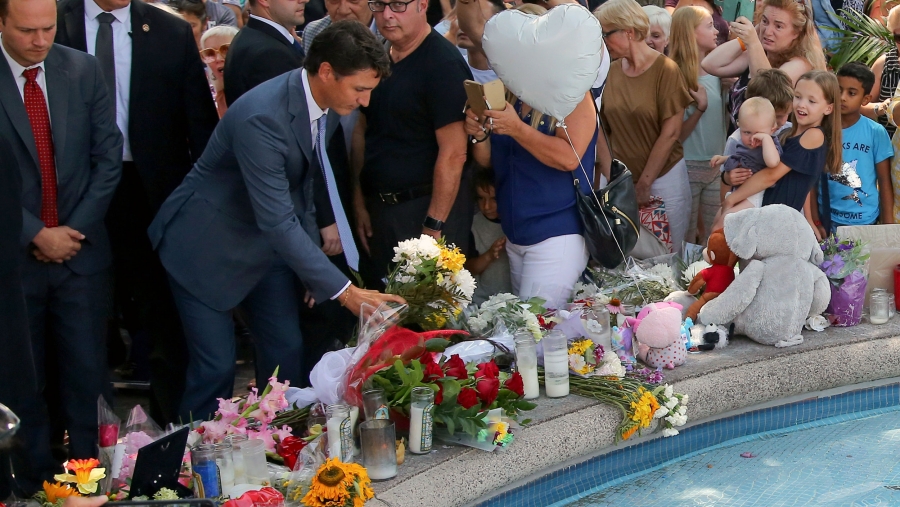 Canada's Prime Minister Justin Trudeau lays flowers at the site of the mass shooting at Alexander the Great Parkette on Danforth Avenue in Toronto, Ontario, Canada, on July 30, 2018.

“Why does anyone in this city need to have a gun at all?” asked Toronto Mayor John Tory, who’s since asked Prime Minister Justin Trudeau to ban handguns in Toronto, increase penalties for gun trafficking and do more to stop cross-border gun smuggling. “As I’ve said repeatedly, this is an international problem and this is a domestic problem. There are far too many people carrying around guns who should not have them.”

It’s pretty normal for Canadians to have rifles; handguns and automatics have only been getting popular recently. The number of them registered in Canada increased by a third from 2012 to 2016, topping a million. But that’s still a small number compared to estimates of firearms in the US.

“One of the challenges we have is that Canadians pat themselves on the back a lot because we compare ourselves to the US,” says Wendy Cukier, president of the Coalition for Gun Control and a professor at Ryerson University in Toronto. “Of course, if you look at Chicago, which is the same size as Toronto, Chicago had 10 times as many gun murders last year as we did. But I would argue we need to set our sights higher. We should be looking elsewhere for our standards, not south of the border.”

Related: How the firearms industry influences US gun culture, in 6 charts

There’s another issue from south of the border. Many handguns involved in crimes come from the States. Cukier says historically in Toronto about two-thirds of handguns used in crimes came from the US.

“It would be great if the US had better gun control because that would benefit all of us,” Cukier says. “But the fact remains that a significant proportion of the guns that are misused originate in Canada. We need stricter controls on handguns. We need a complete ban on military assault weapons. Right now there are loopholes. We need stronger screening. We need better record keeping so police can trace guns.”

Dave Partanen, a member of the Canadian Coalition for Firearm Rights, says he “evangelizes” about guns in Canada.

Partanen says he was raised and conditioned by TV and movies to see guns as unsafe and criminal. But four years ago, his wife got him a gift certificate for a session with a gun instructor. Partanen says once he understood how strict Canadian gun laws are — especially compared with the US — he became convinced that owning and shooting handguns is a safe hobby.

“It's no different than playing hockey,” he says. 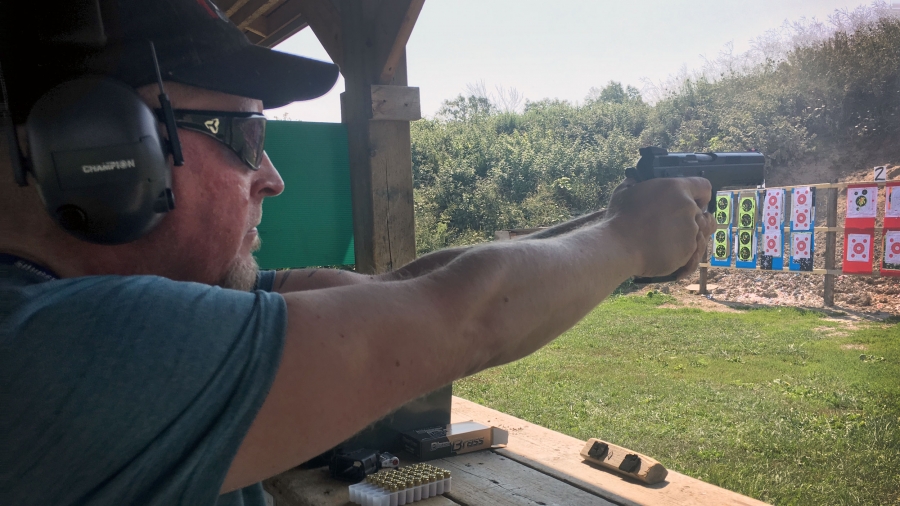 Dave Partanen, a member of the Canadian Coalition for Firearm Rights, fires his handgun at Silverdale Gun Club, a hour south of Toronto.

But it takes a lot more than buying some equipment to start the sport of shooting. Partanen had to complete a two-day safety training course with written and practical exams. Then there was a federal background check.

“You have to provide spousal consent if you're married,” he explains. “You have to provide names and contact information for any conjugal partners that you've had in the last two years. They ask for medication history, mental health history. They want to know that you’re gainfully employed, that you haven't had any kind of financial setback that's going to put you over the edge and all that.”

The process took eight months. Now Partanen, a software developer, has a collection of handguns and semi-automatic rifles. He keeps them locked in individual cases, separate from his ammunition. Partanen’s licenses only allow him to transport his firearms at the Silverdale Gun Club, an hour south of Toronto.

“The common, knee-jerk reaction among politicians and legislators and all that is to say, ‘Well, we've got to put tougher restrictions in place,’” he says. “And when you look at the regulatory environment that we're in, I don't understand how clamping down on the people that are complying with the law is going to make any difference — because we're not the problem.”

While Canadians have been debating how to prevent things like what happened at the Danforth, Jerry Pinksen has been sitting by his girlfriend Danielle Kane’s hospital bed. She woke from a coma a few days ago.

“I would still do the exact same thing,” he says. “I would do it again.”

Pinksen’s heard about the Toronto mayor’s proposal to ban handguns. He thinks it’s a good idea, even though he doesn’t think a ban would’ve stopped what happened at the Danforth.

“I don’t think what happened that night was a security issue,” he says. “It was a societal issue.”

Society hasn’t learned how to help people with mental illness, he says. Pinksen thinks that’s the best way to reduce gun violence — not by allowing more people to carry guns, as is sometimes argued in the US. 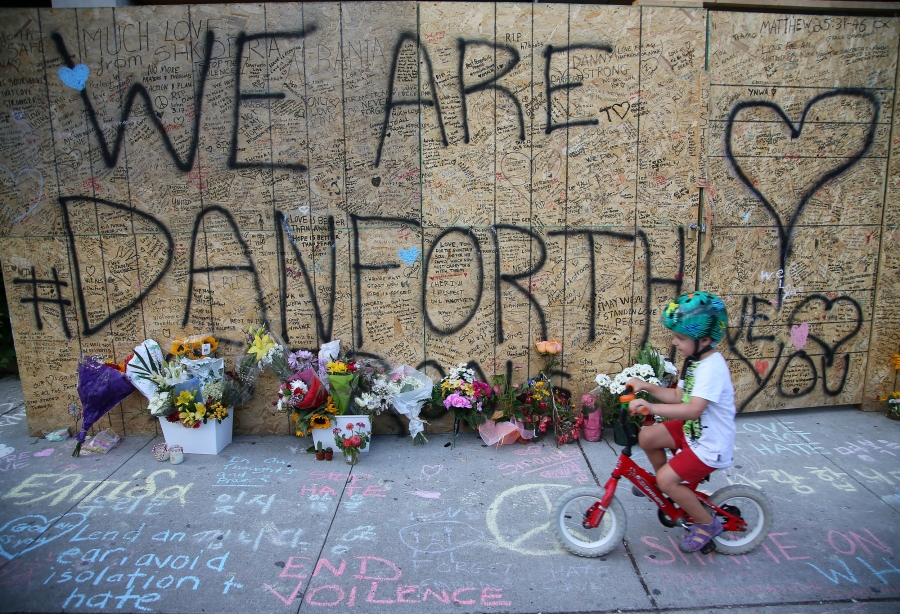 A boy passes messages written on construction boarding after a mass shooting on Danforth Avenue in Toronto, Canada, on July 25, 2018.