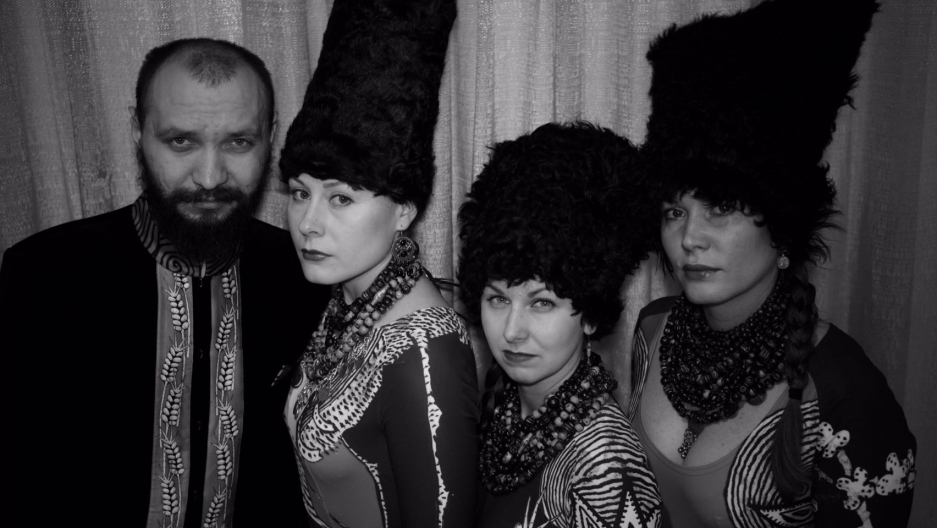 When you go to hear the Ukrainian band, DakhaBrakha, the first thing you notice is their outfits.

It's quite a fashion statement and suits their unique and beautiful blend of traditional, Ukrainian folk music and punk rock — a sound they describe as "ethno chaos."

The three women and Marko Halanevych, who plays accordion and sings, came together in 2004 at the Kiev Center for Contemporary Art with the help of avante-garde theater director Vladyslav Troitskyi. The band's name means "give/take" in Ukrainian. Since their start, they've released five albums and gone on 14 tours all over the world.

Vocalist and cello player Nina Garenetska says she especially enjoys the reaction the band gets in the US. "Americans are very emotional people. When they love something, they will jump up and scream and clap. And if they don't like it, they'll just sit there quietly," she said through a translator.

In a recent, sold-out concert at the Dakota Jazz Club in Minneapolis, no one was sitting quietly. There was plenty of dancing, singing and clapping. Clearly, the love is mutual.

DakhaBrakha draws from traditional Ukrainian folk songs — they want to show people through their music that Ukraine isn't part of Russia. Ukraine has its own rich traditions going back long before they were part of the Soviet Union. The band's vocal style is called "white singing" and came from the Hutsuls people in the Carpathian Mountains.

DakhaBrakha has been described as "psychedelic ethno" and "punk ethno" but the group doesn't label themselves that way. They consider themselves as having more of a world music feel — taking sounds and voices from all over the map and tying it together with Ukrainian folklore.

DakhaBrakha incorporates stories collected from small villages throughout Ukraine. A perfect example is the song "Karpetsky Rap," or in English, "Carpathian Rap," from their 2010 album, "Light." The piece is based on what Garentska recorded from a woman in a village she visited. It tells the story of a young woman in a small village who's looking for a husband. The song, while hearkening to days gone by, has a contemporary theme.

“It was almost as if, though upon searching for the right husband, she maybe has some neuroses," said Tsybulska, who plays percussion and sings. The young woman is basically really picky, as the song illustrates.

"It is about a girl who wanted to find a husband and goes through one after another because there were always issues that arose: [this man] had a bad mother, [this other one] does not own a house, this one’s nose is crooked, for example. So, there were always shortcomings that did not satisfy her," said Tsybulska. Sound familiar?

Making music about the plight of Ukrainian women is what DakhaBrakha does. It's something they know well, though the three vocalists say they are lucky not to feel the same pressures that so many other women in their country do. For one, their spouses support their musical ambitions.

"For some people in Ukraine, it’s considered normal to have the idea that a woman should be at home cooking and taking care of things, and she doesn't need to worry about having a career," said Garenetska.

Also, many Ukrainian women suffer abuse at home. According to the National Police statistics, 60 percent of women in the country experience some form of intimate partner violence.

“The idea is that a woman must not let herself be oppressed. That if a girl is taught by her mom that it's OK to be treated a certain way, the consequences will come out later in life. And so we have to teach our children, our daughters, to be strong and to stand up for themselves," said Tsybulska.

That message comes through in their songs. And in Ukraine, it's a message that isn't always well-received. Tsybulska said when people back home listen to them, some are "are in shock." After all, Ukraine is still a young country. But Tsybulska is hopeful. Women's roles are changing. Just a handful of years ago, women in Ukraine couldn't hold certain jobs for fear it would interfere with having a child. Today, more women are providing for themselves and their families. And that's what DakhaBrakha's music is all about — being a part of that change.