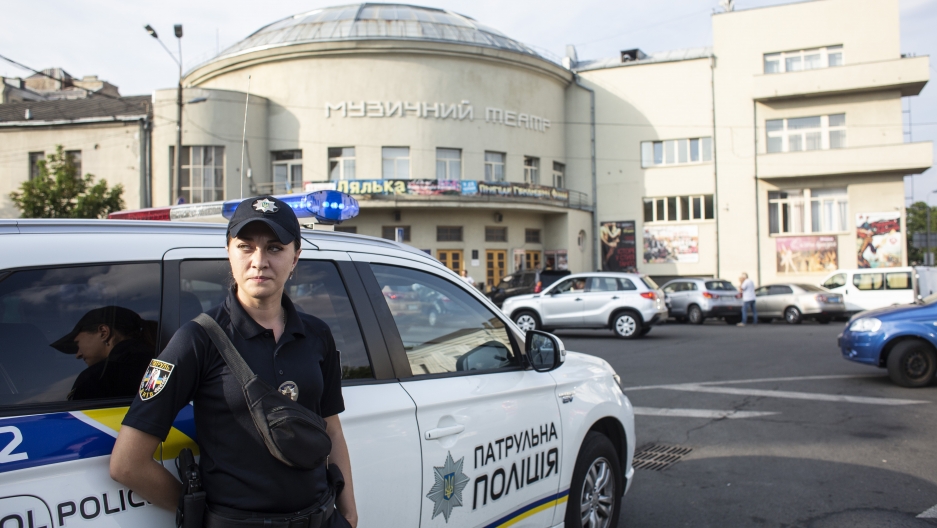 Senior Lt. Yaroslava Trushina looks on from her police car during a calm moment on her shift. Until three years ago, women weren't allowed to be out on patrol. It was deemed unsafe. Now, after government reforms, women are allowed to do police work, along with more than 450 other jobs that were previously off-limits.

It's a busy Tuesday evening in the trendy neighborhood of Podil, not far from the city center of Kiev. It's hot out but people are enjoying a breeze as they stroll through a mostly pedestrian-friendly part of the city. A street band plays in the background while people line up to ride a huge Ferris wheel.

It's here that Senior Lt. Yaroslava Trushina is directing traffic and fielding calls on her phone. Amid the chatter on her police scanner, Trushina re-opens part of the street where a car hit a pedestrian. She and the two other officers on the scene find out the pedestrian died at the hospital minutes earlier.

It's a pretty normal night for Trushina, except that three years ago she wouldn't have been allowed to do this kind of work. Until 2015, more than 450 jobs were off-limits to women in Ukraine, according to the World Bank. Driving a truck, driving a bus, farming and, yes, police work were deemed to be unsafe for women. Ukraine still had Soviet-era laws that said these jobs threatened women's reproductive health and barred them from certain positions.

After revolutionaries ousted Russian-backed president Viktor Yanukovych in 2014, the country started to change. One of the reforms targeted the laws about women's work. Now, 3,100-some women make up 21 percent of the police force, according to statistics provided to PRI by the National Police.

In the fall of 2014, the Obama administration committed $20 million to improve and train Ukraine's National Police.

For 27-year-old Trushina, it's a dream come true. She grew up admiring the work her uncle did as a homicide detective but her dad said, "No way, there is no place for women in the police force." She decided to apply anyway.

Related: These are some of Ukraine's first women police officers. Thanks, in part, to the California Highway Patrol."

"So when this reform of the police came, and I heard this announcement, I decided to apply," she says. "And no one in my family knew I was doing this until I went for the interview."

Now she's head of her unit and oversees 60 male officers.

No more 'selfie with a cop' photos

When the women officers first hit the streets, they got a lot of attention. Media outlets like Buzzfeed and others in Ukraine flashed pictures of women with perfect hair, nails and lipstick in uniform with their badges and guns. People in neighborhood squares all over Kiev flocked to get their pictures taken with these new "lady cops." The hashtag #селфізкопом, which means "selfie with a cop," surfaced, showing smiling men and women posing with one of Kiev's newest recruits.

Trushina posed for her fair share of selfies on the street. Now, when people ask her for a picture, she tells them to get one of the male cops instead. She's just interested in being a good cop and she works hard to make sure the male police officers under her command know who is in charge. If anyone is late for the meeting at the beginning of her shift, there are consequences.

“They have to know that not only do I talk the talk, but I walk the walk," Trushina says. "If anyone is late to their shift, they have to do 50 push-ups. Hot sun, snow or rain. I don’t have time to repeat important information to them if they are late.”

Trushina says she hasn't felt pushback for being a woman, but some of her fellow officers have. Like 28-year-old Katerina Lyshnevska, a senior inspector on the force. When she first started, men on the streets of Kiev would approach her, wondering why a woman would want this job.

"They would say, ‘Oh you're so small, you are so tender. Maybe you know you would rather go and find a husband. Make borscht and take care of the kids.’"

That wasn't the only thing Lyshnevska got angry about. Men would also say she needed to "go to the gym to buff up a little bit," but they wouldn't say that to other men of the same stature. 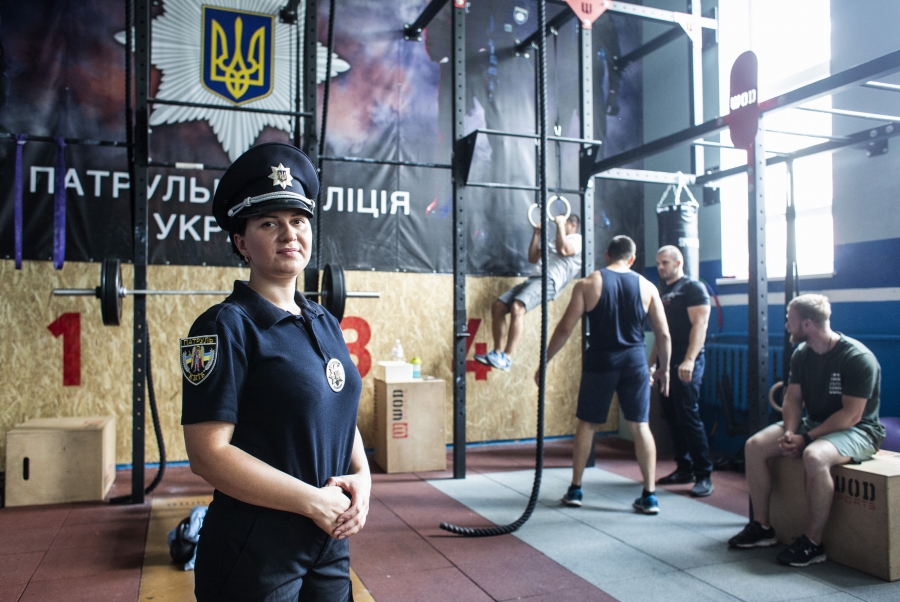 Natalia Bodnar, an officer in Kiev's police force, poses in the gym. Before 2015, women were not permitted to work as police. Bodnar says she joined to reduce domestic violence, which is a problem in Ukraine.

Inspector Nataliia Bodnar does go to the gym. She boxes, lifts weights and makes sure the other men on her unit know she's just as tough as them. She joined the police force because she wanted to reduce domestic violence, which is a problem in Ukraine.

According to the National Police statistics, 60 percent of women in that country experience some form of intimate partner violence. And they say a lot of it goes unreported. In Kiev, Bodnar works with a special unit called POLINA, which stands for Police Anti-Domestic Violence Network. Kateryna Pavlichenko, deputy head of Patrol Police Department, says one of the goals of POLINA is to earn trust and therefore have more women come forward and report abuse.

"I wanted to improve the situation with the domestic violence," Bodnar says. "I myself came from a pretty bad neighborhood. I wondered, ‘Can a regular person come to the police and actually make some changes about this situation?'”

In addition to police chases, Bodnar spends her time talking with women and working with a team of psychologists who meet with victims after the initial police visit. She feels proud of her work and thinks she's setting an example for other women who might want to work in law enforcement someday.

Women like Trushina and Bodnar are helping to reshape the image of the police in Ukraine, which up until recently had the reputation of being a corrupt institution, according to Pulitzer Center reports. Trushina remembers her parents getting pulled over by an officer for speeding. Instead of getting the ticket, the police officer would demand money. There is a public perception from people on the street that women are more trustworthy. But, as Trushina points out, it’s going to take more than just female officers to fight corruption and restore trust.

“When I came to the police force it was about $350 [US] per month."  This is a good-paying job, but for Trushina, who is a single mom, it's still not enough money.

"Because of the small salary, there is a temptation for people to take bribes and for corruption. People need to get compensated more.”

The average wage in Ukraine is about 9141 hryvnias per month, or $338 US dollars. Since Trushina started, her salary has climbed to $380. It's a small step and she knows she will be able to make more as she rises in rank.

Trushina and her fellow officers say they want to make law enforcement better for everyone — including Trushina's own daughter.

“I realized that the most important thing was, I'm not alone in this," she says. "There are other women and my hope, my focus, is that my kid would be able to play safely on the streets." 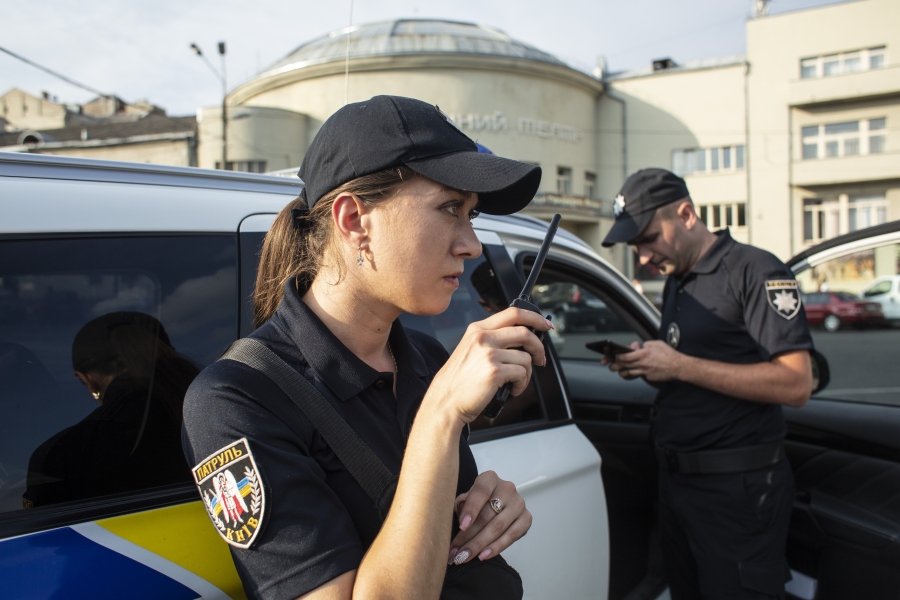 Lt. Yaroslava Trushina talks on a radio during a busy evening in Kiev in June.