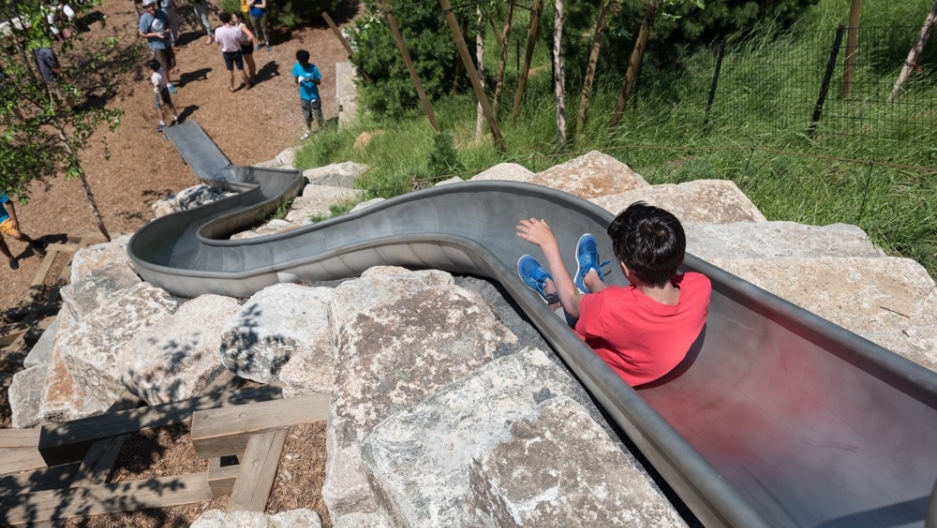 Opening day at the Hills playground on Governors Island.

Alexandra Lange is an architecture and design critic and the author of a new book, “The Design of Childhood: How the Material World Shapes Independent Kids.” The book looks at five different arenas of design about and for children: toys, home, schools, cities ... and the playground.

The 1980s saw a turn towards conservatism in playground design, with greater concern for child safety. “They put in a series of safety regulations in response to a set of lawsuits,” Lange explains. “So that's why you almost never see play equipment now that's not over wood chips, sand or those squishy tiles.”

Worried about broken bones, playground designers phased out the classic metal jungle gyms over asphalt, and merry-go-rounds and seesaws have become a thing of the past: “That kind of equipment requires a larger fall zone. So you have to have a larger area of soft surfacing material around a merry-go-round in case kids let go and spin out. They can get more on the playground pad if they don't have equipment that requires that larger fall zone, so they take out merry-go-rounds and seesaws.” 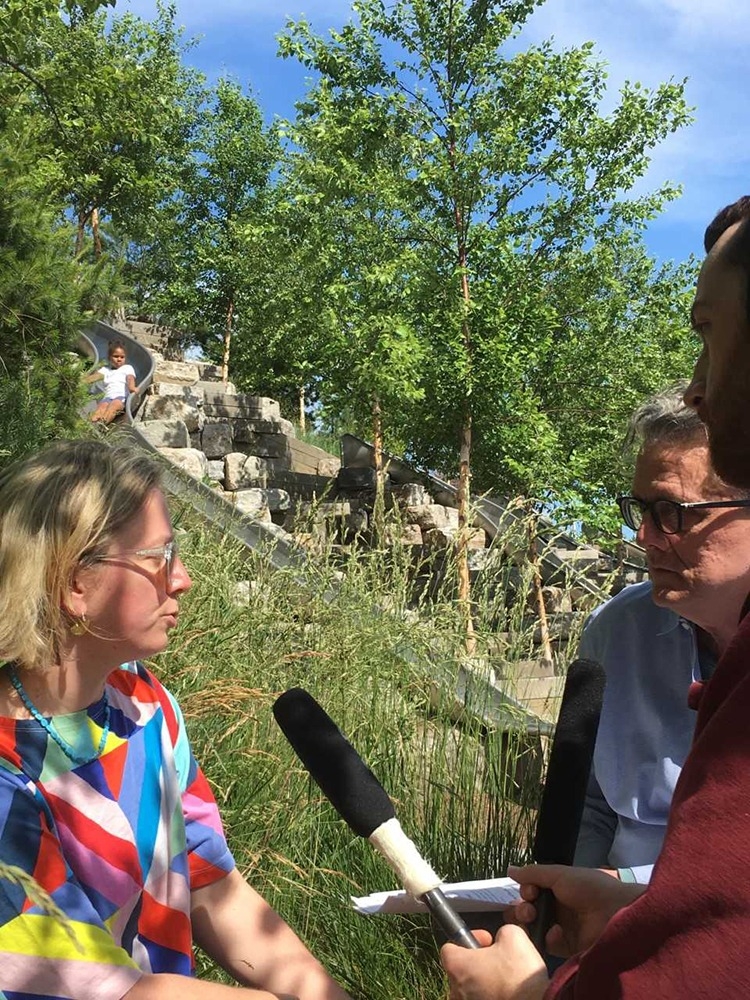 Alexandra Lange and Kurt Andersen, in front of the Slide Hill on Governors Island

Lange agrees that these safety modifications are important, but she worries that we might have now gone too far.

“Children aren't getting hurt, but they're also not being challenged, and then they don't want to go play.” Not only are the standardized playgrounds less fun, but they might also be hindering children’s development.

“One of the things that developmental psychologists have started to talk about in terms of children's play is how if children are always given a ladder to the slide that has the same distance between the rungs and is optimized for easiest as climbing, then they don't learn the climbing skills that they used to,” says Lange. “And in fact, those merry-go-rounds and seesaws have important effects for physical development: There's something called the vestibular system, which is your inner ear, which is about balance. And kids need to have that challenged in order for it to develop. So now they don't have the opportunity to use spinny things and that makes their balance develop more slowly.”

As a mother herself, how does Lange balance safety concerns with what she’s discovered researching and writing this book? “You want your kids to be independent, you want them to have their own minds, but then you see them up on a big rock ... and you think, ‘Is she going to fall? Does she know what she's doing?’ And that's hard. But if you don't let your child take that risk, they don't get the reward of the satisfaction of getting up that rock.”

Kurt Andersen accompanied Lange (and her children) for a visit to one of the playgrounds discussed in her book, Slide Hill on Governors Island.