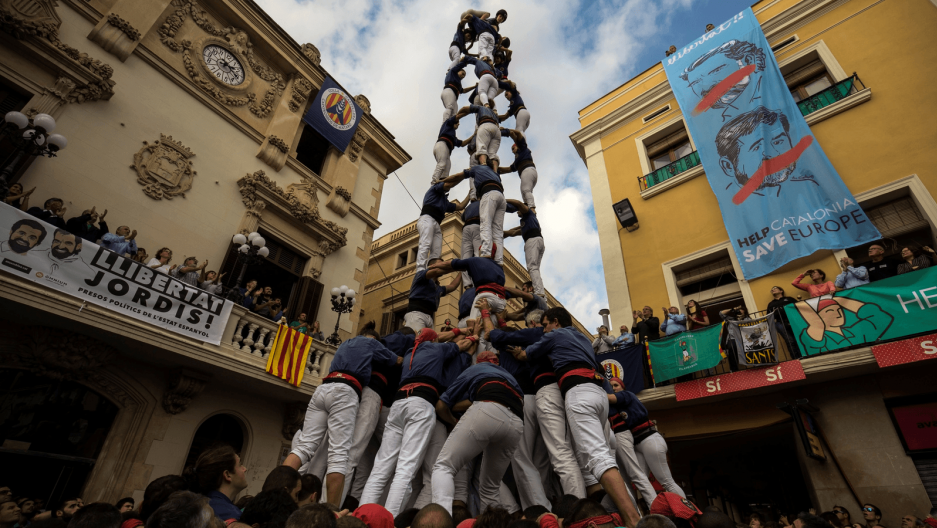 Is there anything more symbolically Spanish than a bullfight? In Spain, bullfighting is depicted on souvenirs and trinkets all over the country, and it seems nearly every town has its own bullfighting arena and bullfighting museum. The outfits of the bullfighters, beautifully embroidered with golden thread, are timeless. The bull even appears on one version of the Spanish flag.

But in Catalonia, a semi-autonomous region in Spain that is fighting for independence, bullfighting was banned and local residents don’t want to see it come back. Even after Spain’s Constitutional Court declared the province’s ban on bullfighting unconstitutional in 2016, there hasn’t been a single bullfight staged here. And doesn’t seem like there will be one anytime soon. Bullfighting was banned in 2010, even though the last bullfight in Catalonia took place in 2011.

“It is really not a Catalonian tradition; it is something more from the south of Spain. We had a different evolution than the rest of Spain with [respect to] animal protection,” said Xavier Algala, 39, who works as a chef in Barcelona. “It is not a tradition, it’s torture.”

While at least two Spanish bullfighters have died since 2016 after being gored by bulls and more have been injured, Catalonia residents said the sport should remain illegal not because it is dangerous to humans, but because it is torture for the innocent animal.

“The bullfighter chose that, but the bull didn’t choose that,” said Algala. “Catalonian people are more sensitive to the animals. For a person to kill an animal just for enjoyment, we don’t understand it, we don’t like it.”

Albert Ventosa, a 36-year-old graphic designer, said that he doesn’t miss bullfighting — even though he is not a Catalonian nationalist. Ventosa recently went on a date at an old bullfighting ring in Barcelona that has been turned into a shopping mall.

“I think it’s better to contemplate the building thinking that it’s not used for bullfighting anymore. It’s important to show the people that there was bullfighting here, but not now,” said Ventosa, who is a vegetarian.

He said that more people are choosing to become vegetarians in Catalonia, just as there are more people who disagree with the mistreatment of animals.

But, of course, not everyone in Barcelona sees bullfighting as a foreign tradition.

One victim of the ban is Juan Carrillo, who owns a bullfight-themed restaurant called Los Toreros (The Bullfighters). The restaurant, which displays real bulls’ heads on the walls, is periodically attacked by pro-Catalonian independence activists who demand that the decorations be taken down, Carrillo said. Both nationalistic ideology and animal rights factor into the anti-bullfighting attacks, he says.

“People come here on purpose to insult me. What right do they have to scream at me?” Carrillo said. “We have the head of a bull that was killed by the first female bullfighter. We have the first black and white photos of bullfighters from 1922 in Barcelona! We have a lot of paintings that are more than 100 years old. It’s history. Many people are very, very interested to see all that.” 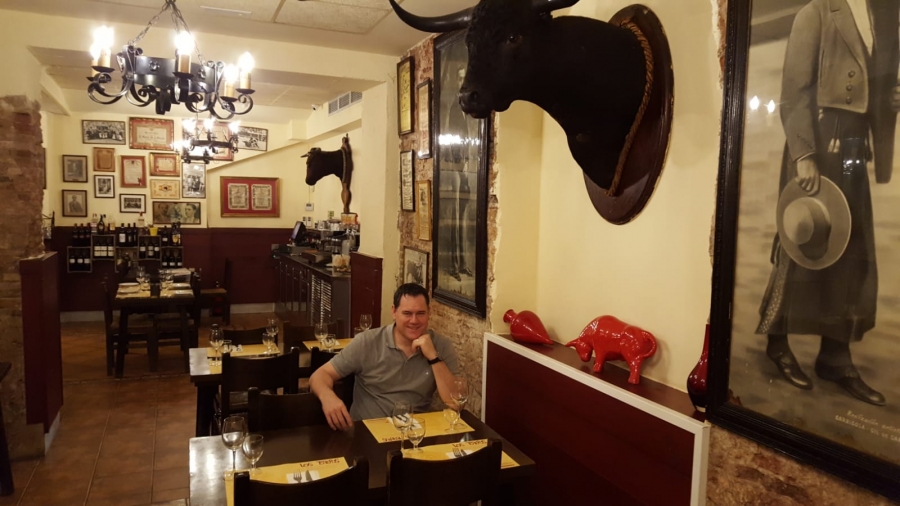 Juan Carrillo, owner of Los Toreros restaurant in Barcelona, often faces attacks from Catalonian separatists and animal rights activists. “People come here on purpose to insult me," he says. "What right do they have to scream at me?”

Carrillo said as far as he knows bullfighting came from ancient Greece and ancient Rome, where there were always spectacles with animals — and not from southern Spain.

“A lot of tourists are disappointed that they can’t see a bullfight here,” he said.

But while bullfights have gone away from Catalonia, another dangerous custom is becoming more popular.

The town of Tarragona, which is about an hour from Barcelona by train, is famous for its castells, or human towers. Every two years, the town holds an international competition in which teams from different towns build human towers that reach as many as nine human stories high, with men, women and children standing on each other’s shoulders. The smallest child, who can be as young as 5 years old, climbs to the very top. The competition takes place in a former bullring.

The human tower custom started in the 18th century — at around the same time as the first bullrings were built in Spain, according to Professor Enric Ucelay Da Cal from Pomoeu Fabra University in Barcelona. The human towers evolved from a popular dance, called Ball de Valencians, that ended in the building of a human tower. After some time, people started to concentrate on the tower and skipped the dance, says Guille Soler, the manager of the Human Tower Teams of Catalonia.

The human towers, which are now being promoted as an authentically Catalonian activity and broadcast on television, have become increasingly popular in recent years. Human tower competitions which used to exist mostly in rural areas have now spread to cities, where every neighborhood has its own human tower group, Ucelay Da Cal said. In addition, women and girls are now also included.

“Traditionally, it was always boys. The introduction of girls — it’s a shift from the 1990s — is also a sign of the expansion of the movement,” he said. “I don’t think there is a city today in Catalonia that doesn’t have human towers.”

Like bullfighting, castells can be dangerous. The men on the bottom hold a tremendous amount of weight. The top three levels of the tower are built by children, who balance many several feet up in the air. A 10-level human tower would reach around 35 feet high; however, those are rare. Most towers reach six to eight levels and heights of 30 feet. Most towers are stable, but about three percent of towers fall — although this doesn’t mean people are injured every time. When the towers often tumble down, injuries can ensue. In 2006, a 12 year-old-girl was killed after she fell from a tower. Even non-lethal injuries have left victims paralyzed.

But while Catalonia banned bullfighting because of cruelty to animals, human towers are allowed and even encouraged. The Catalan Tourist Board’s website features a photo of a human tower. Catalan flags decorate the arenas where human tower competitions take place. Only one change has been introduced: Children who climb to the top now have to wear helmets.

Barcelona native Aureli Bisbe Cerveto, 30, who’s been building human towers for nine years, said he loves the sport because it creates a feeling of belonging with others.

“I tried it and I got hooked,” he said. “Mainly what I like is that it’s not an individual activity. You go there and you see very different people and they all work together to get the same goals – the kinds of people that you know if they started to talk to each other, they wouldn’t agree on many things.” 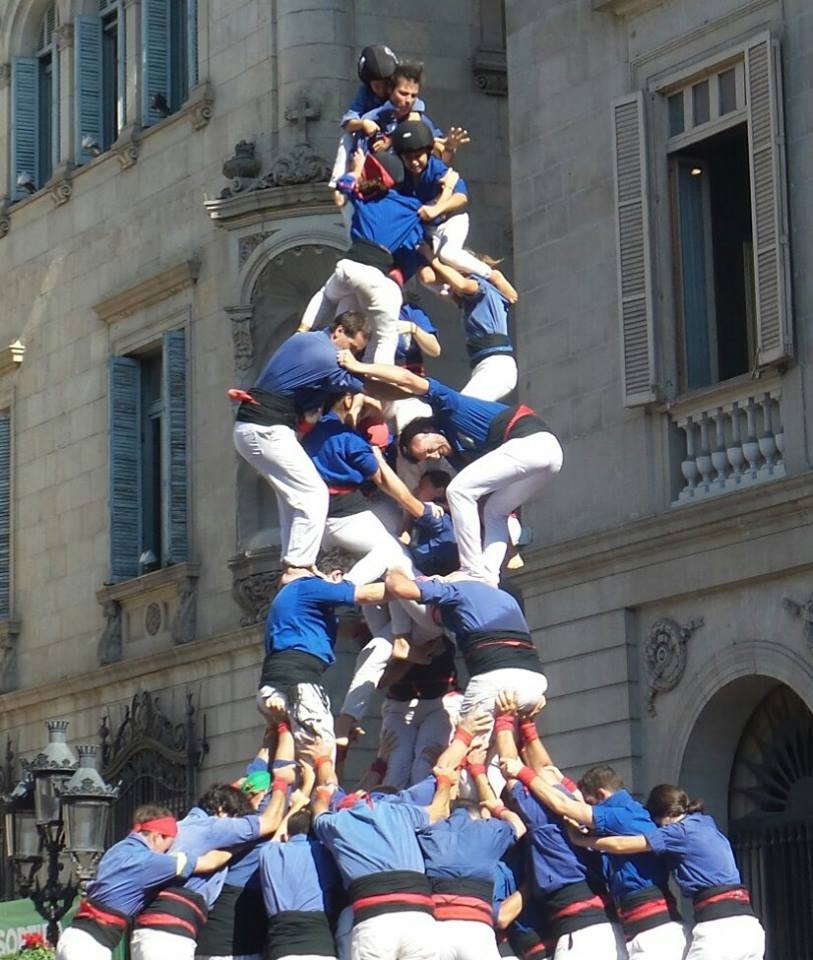 Human towers like this one have been popular in Catalonia for hundreds of years.

The most dangerous place to be in a human tower is at the base, where men must always resist the urge to look up even as the tower is crumbling, Cerveto said. Turning their head can lead to a broken neck. Cerveto said he survived a fall from a human tower “many, many, many times”  but only once hurt his neck and couldn’t turn his head the next day. Mostly if you follow the rules, it’s not as dangerous as it looks, he said.

Cerveto said that the towers on his team fall about once or twice per year.

“We know if we do things right, the risk is very minimal,” he said. “Just riding a motorbike is more dangerous than building human castles.”