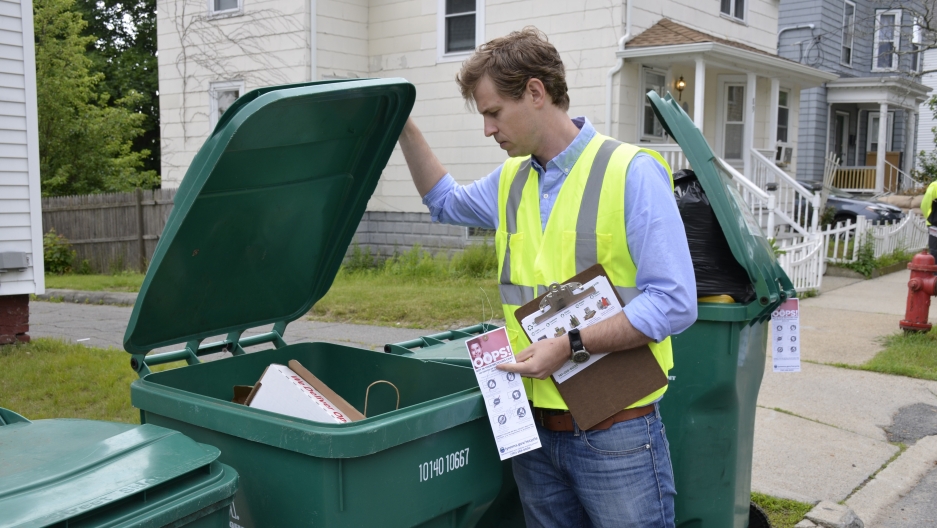 Cody Marshall, with The Recycling Partnership, looks through a recycling bin in Lynn, Massachusetts. His organization is working with cities across the nation, helping them educate residents on how to recycle better.

In recent years, the model for US recycling has been to send it overseas to China. China gets a raw material worth money; the US gets rid of its rubbish.

But since the start of this year, China has been refusing to take contaminated recycling, forcing communities across the US, like Lynn, Massachusetts, to quickly take action.

That's why Julia Greene, recycling coordinator for the city of Lynn, is spending her summer looking through recycling bins.

She rifles through Lynn resident Diane Thomas’ bin. It’s filled with plastic bottles — a good thing, except for one problem: The bottles are filled with liquid.

Greene explains why that’s an issue. The liquid can leak onto perfectly fine recyclables and ruin them.

“I’m going to have to tell my niece,” says Thomas, explaining why some of the plastics are still filled.

The bin also has used paper towels — which although they're paper, aren’t recyclable. They're covered with food that can further contaminate other products in the bin. “That’s my grandson,” mentions Thomas.

Greene says most residents, like Thomas, have good intentions but they simply don’t know some of the rules to recycling.

Later, Greene broadens her explanation about the problem with liquid-filled bottles. “When you put those into those bales and then they sit there for weeks and months, as they go to be made into other materials then you’ve got all kinds of problems with mold, etc. That’s why we want to clean it up as best as possible.”

Americans are going to have to clean up their bins, as best as possible, in a hurry. 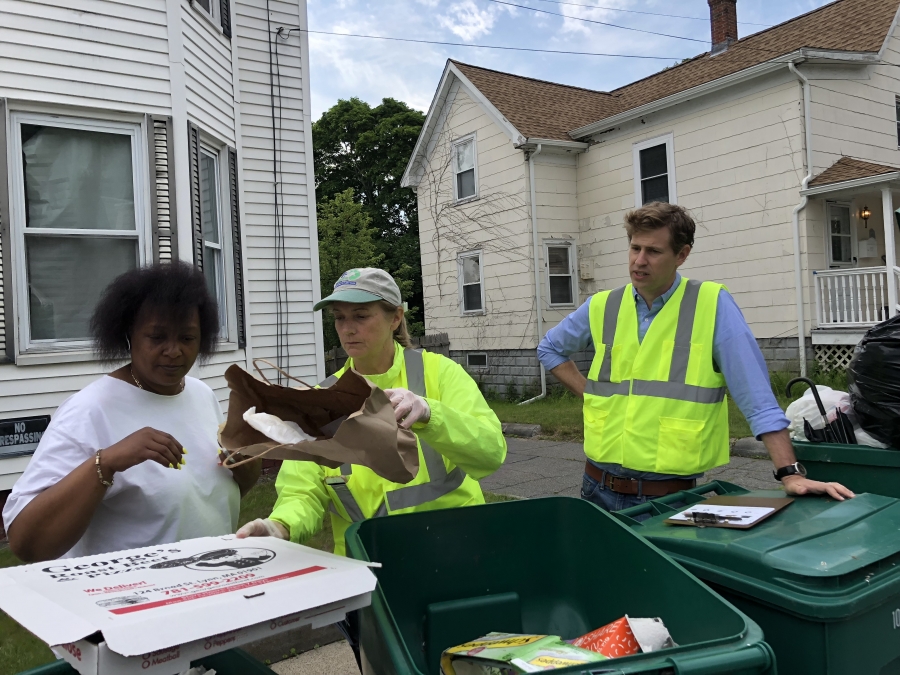 The city of Lynn had an audit of its recycling program in April — the bins had 26 percent contamination, 3 percent of which was electronic waste.

“So that meant people are throwing TVs in there, their computers. It’s a nightmare,” says Greene. “When we saw that on the report we said, ‘Wow we’ve got a huge problem.’”

In Lynn, when there’s nobody around to teach Recycling 101, Greene puts a tag on the cart that explains the basics of how to recycle better. (The tags are, of course, also recyclable.)

To be clear, Lynn isn’t sending recycling with 26 percent contamination directly to China. A truck first delivers the recyclables from the bin to a local sorter called a materials recovery facility, or MRF.

“From there, different equipment and people kind of sort the trash out,” says Cody Marshall, with The Recycling Partnership, an organization that’s working with cities across the country to help them clean up their recycling. His organization developed the tags to put on green bins and helps municipalities educate people how to recycle smarter.

Still, it’s much easier for the sorter to get to 0.5 percent contamination if bins are cleaner in the first place.

But let’s stop picking on Lynn. Marshall says communities around the country typically produce contamination levels between 10 and 20 percent. And we’re not just talking about greasy pizza boxes. Marshall says people also routinely throw wood, propane tanks and garden hoses in their bins, thinking the items must be recyclable.

Those large items would hopefully get weeded out at an MRF before being sent overseas. Still, they can gum up the machines, losing the sorters time and money — extra costs that inevitably get passed down. Today, many cities that used to get paid for their recycling are now paying recycling facilities to collect it. 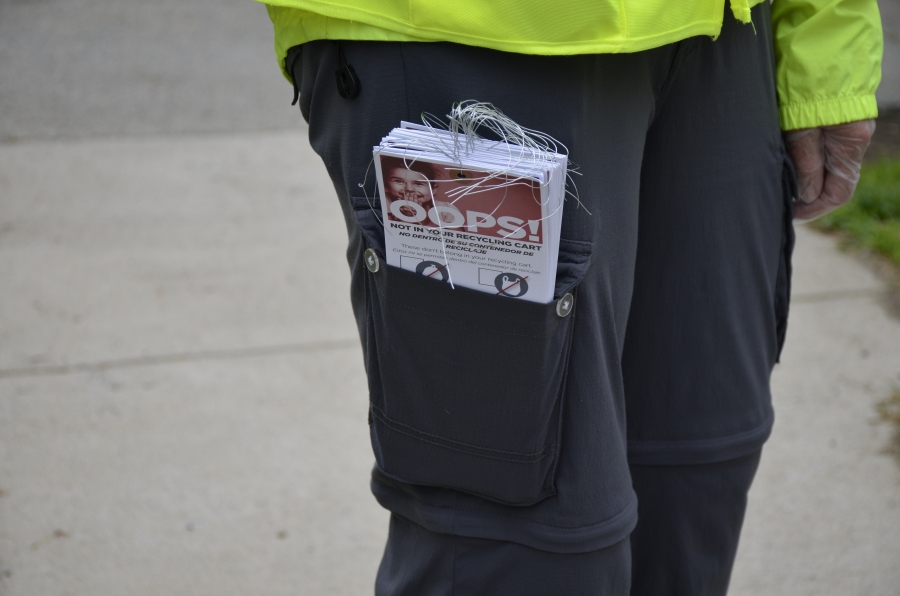 Julia Greene with the city of Lynn, Massachusetts carries “Oops!” tags to put on unclean recycling bins, explaining some basic rules for better recycling. The tags were developed by The Recycling Partnership.

Those in the recycling industry grumble that China has set the bar too high with an impossible standard of purity. But there's also another response.

“It’s been a wake-up call, no question,” says Brooke Nash, with the Massachusetts Department of Environmental Protection.

“It’s an opportunity for us re-educate folks and get back to basics. And let’s face it, recycling is confusing,” says Nash. “What we get at the grocery store, our packaging is constantly changing; packaging innovations make it all the more confusing. Is this recyclable or is it not? Twenty years ago, eggs came in paper cartons. That was it. Now you can buy eggs in Styrofoam cartons, you can buy them in clear plastic cartons. Well, what do you do with those things?”

Most throw it in the recycling bin and hope it’s recyclable. Within the industry, they call it “wish-cycling.” Adding to the confusion, cities and towns sometimes have different rules for what can and can’t be recycled.

So, between varying standards, ever-changing packaging, our bad habits and China’s crackdown, where does this leave us? India and nations in Southeast Asia are picking up some of the slack. But Nash says they’re also following China’s lead.

“Nobody wants to be the recipient of material that is 20 percent trash. So we’re going to see a domino effect that markets around the world are going to demand a cleaner product,” says Nash.

And just giving up on recycling is not an option. In Massachusetts and other states, it's also against the law to put bottles and cans in landfills. Recycling is not only good for the planet, it's good for the economy: Recycling in the US generates more than $100 billion in economic activity annually. Just imagine what it could be worth if it were actually clean.