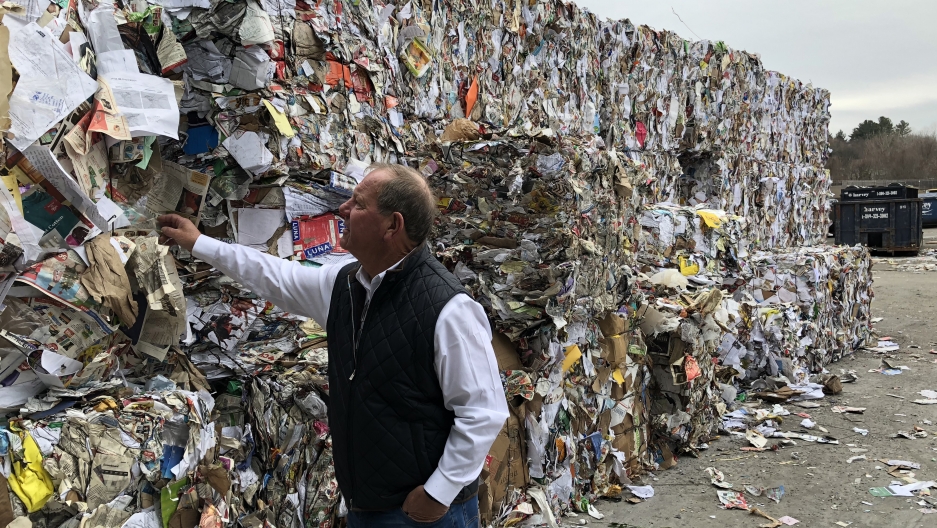 Ben Harvey of E.L. Harvey & Sons has stored about 3,000 bales of paper in the past month that he’d normally be shipping to China. At $60 a bale, it equals about $180,000 of unsold product, about 10 percent of the company’s revenue.

After you collect your cans, bottles and paper, then put them out by the curb, do you ever think about where everything goes after the truck picks things up? Largely, it goes to China.

Every day, nearly 4,000 shipping containers full of recyclables leave US ports bound for China. China sends the US toys, clothes and electronics; in return, some of America’s largest exports back are paper, plastic and aluminum.

But that equation is changing as of Jan. 1 — China is enforcing its new “National Sword” policy, which bans 24 types of solid waste, including various plastics and unsorted mixed papers, and sets a much tougher standard for contamination levels.

China notified the World Trade Organization about the ban in July, essentially saying the country would no longer act as the world’s trash dump. Currently, China consumes 55 percent of the world’s scrap paper and is a major destination for other recyclables.

The ban will undoubtedly hurt recycling operators in China that rely on the import of raw materials. But delivering a cleaner China is paramount for Communist Party politicians.

The National Sword is also already being felt throughout the US. About a 45-minute drive west of Boston in the city of Westborough, Massachusetts, bales of paper are stacking up in a parking lot.

“We’re looking at 150 to 200 tractor trailer loads of paper. It’s stacked approximately 12 feet high, and it goes for quite a distance,” says Ben Harvey, president of E.L. Harvey & Sons, a family-run business since 1911.

To be clear: This situation is not normal.

“No, our business is to bring it in, process it and move it out as quickly as we can,” says Harvey. 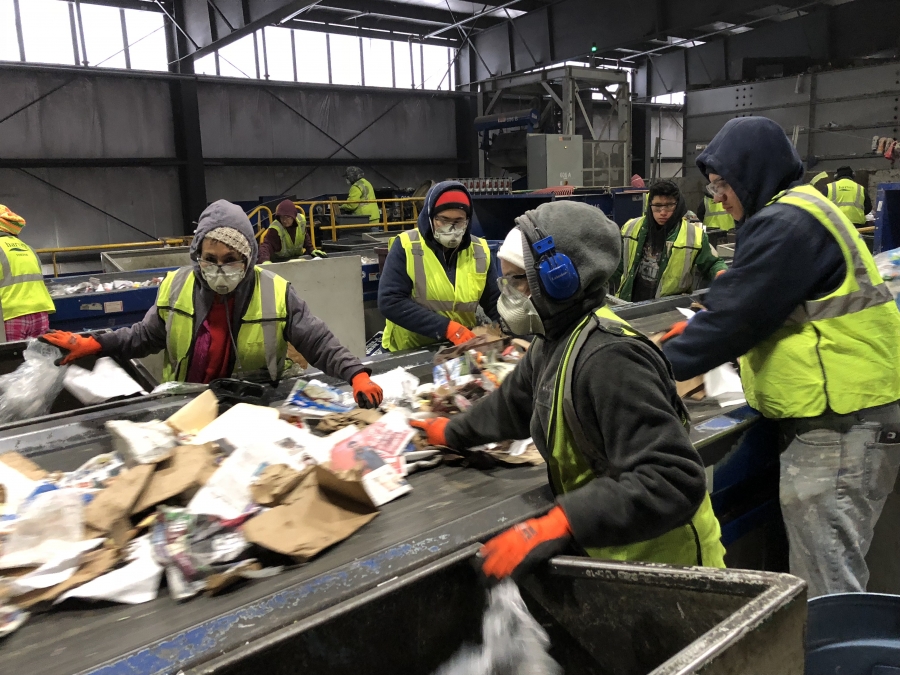 Harvey can’t sell the 2,000-pound bales to China because the contamination levels — the trash that’s accidentally mixed in, something like the remnants of a greasy pizza box that gets thrown in with the recycling — almost certainly exceed China’s rigorous new standards. If he had continued putting bales on ships a few weeks ago, they wouldn't have reached China until the ban would've already been in effect on Jan. 1.

Harvey is hoping that China and the US can work out a deal or he can find other processing mills in Vietnam or Thailand. Selling the material in the US simply isn’t an option.

“Because everything was going offshore, the mills have been slow to develop in the United States to handle this material,” Harvey says. “With the tightness in the marketplace, there might be mills that will be built, but that takes four to five to six years to put in a mill that will handle the capacity that we’re currently looking at.”

In the meantime, he’s growing increasingly concerned as the bales of paper take over more and more of his parking lot.

“If this stuff doesn’t move, and we don’t know what to do with it, we can’t keep it forever," he says. "At some point, it’s going to start to degrade. The other thing that could happen is that if we can’t find outlets — and I’m not talking about just E.L. Harvey & Sons, I’m talking about the industry as a whole — we’re going to stop bringing material into our facilities. And that’s going to impact recycling programs throughout the country.”

In other words, trucks could stop collecting our curbside recycling.

“This is not a little disruption,” says Susan Collins, president of the Container Recycling Institute, a research organization based in Southern California. “This is a big disruption to a bigger industry than most people would think it is, because it’s sort of an invisible process. You put your stuff out at the curb, and it goes away — nobody thinks about it as being a multibillion industry in this country.”

Collins says China’s crackdown presents something between a challenge and a crisis for US recyclers.

“We’ve already put things on ships that may be coming back,” says Collins. “The US recycling industry has asked for some relaxation of the rules, but there are ongoing negotiations right now in the hopes of making this not quite as drastic a move.”

Collins says US recyclers are willing to adjust, but they need time.

China has already relaxed the rules in the past few months, shifting acceptable fiber contamination rates from 0.3 percent to 0.5 percent, still a near impossible standard for US recyclers.

Ben Harvey says he can’t come anywhere close to that. That’s largely because American consumers are making it hard on recycling collectors.

Inside his plant, streams of cans, bottles and paper roll by on conveyor belts. A machine sorts things first, then workers do a second, manual sort — they pick out a lot of trash from the bottles and cans. About 15 percent of the recycling that E.L. Harvey & Sons collects in its recycling trucks is unusable rubbish.

“We call it ‘wishful recycling,’” Harvey says. “The general public says, ‘Hey, let’s put it in [the] recycling barrel; they’ll figure out something to do with it.’”

Harvey says through sorting, he can get contamination levels down to between 1 and 2 percent, but no further, unless better machinery is developed and/or he can expand the line of workers doing manual sorting. But that’s a risky proposition for a business that relies on thin margins and volatile commodity prices.

Harvey estimates that he can continue storing bales of paper in his parking lot for another three to six months. If a solution isn’t found by then, it could mean shuttering the processing facility and layoffs, perhaps getting rid of 50 people.

And that could also translate into more bottles, cans and paper being sent straight to the landfill. 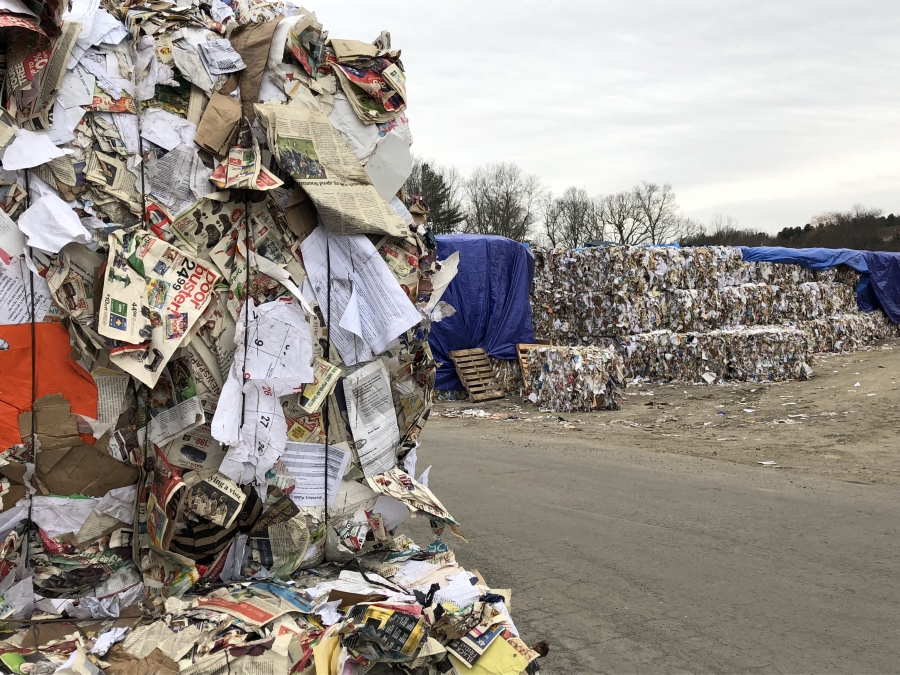 In December, about 3,000 bales of paper piled up on the property of  E.L. Harvey & Sons in Westborough, Mass.