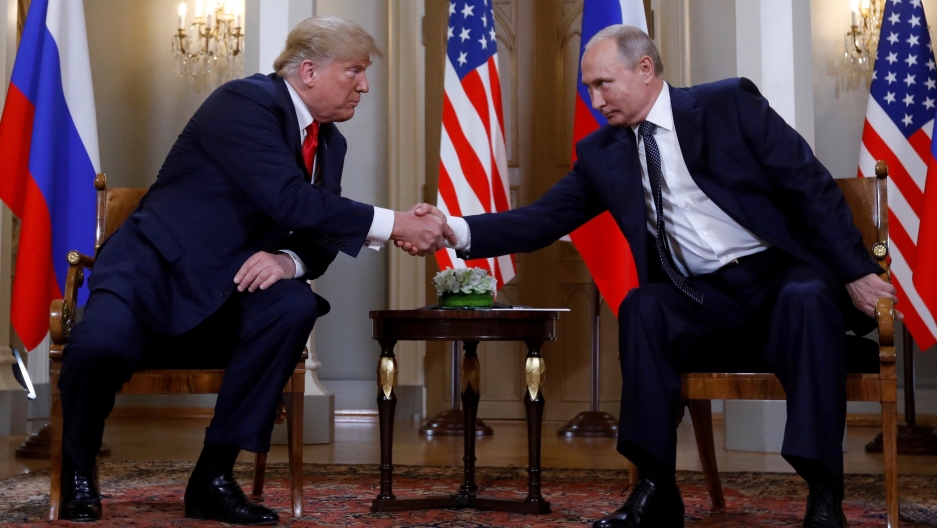 US President Donald Trump and Russia's President Vladimir Putin shake hands as they meet in Helsinki, Finland, on July 16, 2018. After the leaders held a news conference, accusations against Trump of treason started to fly.

The reaction came fast and fierce. And it wasn’t just from Democratic Party activists or liberal news outlets.

Mike Rogers, a former member of Congress from Michigan, US Army officer and FBI official, called it a “betrayal.”

The President’s performance yesterday in Helsinki was nothing short of shocking. To ignore the conclusions of our entire intelligence community and simply accept the word of a former KGB officer is a betrayal of our brave intelligence professionals.

The former CIA director John Brennan even used the T-word.

Donald Trump’s press conference performance in Helsinki rises to & exceeds the threshold of “high crimes & misdemeanors.” It was nothing short of treasonous. Not only were Trump’s comments imbecilic, he is wholly in the pocket of Putin. Republican Patriots: Where are you???

Treason is a serious offense, which might come as little surprise. Anyone found guilty of treason in America would be barred from public office, fined at least $10,000, face at least five years in prison and even a possible death sentence.

That might be why Elliot Cohen, a former adviser to George W. Bush and professor at Johns Hopkins University’s School of Advanced and International Studies, urged caution when it comes to throwing around the word treason.

The word treason is so strong that we must use it carefully. But that press conference has brought the President of the United States right up to that dark, dark shore.

“Trump is right now, before our eyes and those of the world, committing an unbelievable and unforgivable crime against this country. It is his failure to defend,” Blow wrote.

But hold on here. Do the statements from Trump in Helsinki mean that it is now reasonable to be talking seriously about treason?

“I think there is adequate grounds for using that term,” former CIA counter-terrorism official Paul Pillar told the BBC.

Still, Pillar said Congress is unlikely to take serious action at this point.

“I would not predict impeachment anytime soon, until we see a change of heart among most of the members of the Republican Party in Congress,” Pillar said.

“But if and when that day does come, then yes, I think this particular aspect of handling foreign policy and specifically an unwillingness to stand up and defend American democracy against an attack from a foreign power would be part of that.”

Richard Painter, a lifelong Republic who has switched parties, agrees.

“This is treasonous conduct,” Painter says about Trump’s statements alongside Putin in Helsinki.

Painter is now running for US Senate as a Democrat in Minnesota. He says Trump's behavior is all part of a pattern.

Painter says it adds up to what he calls treasonous behavior.

But David Cole, national legal director of the ACLU and a professor at Georgetown Law School, stops short of using the word treason to describe Trump’s actions on Monday.

“I think what the president did was embarrassing. It’s unprecedented. It’s a diplomatic disaster. But it’s not treason,” Cole says. “Treason is a very specific crime, defined by the Constitution itself.”

Cole says treason is defined as waging war against the US, or as aiding America’s enemies at a time of war.

“We’re not in a war with Russia. And so, even if Donald Trump decides to aid Russia in one form or another, it’s not treason,” Cole says.

But that doesn’t mean what the president does could not be illegal or even an impeachable offense, says Carlton Larson, a law professor at the University of California, Davis, who has written a lot about treason.

“People are using the word treason in a much more colloquial sense,” he says. “They feel that our country has been betrayed and that the president has sided with a foreign adversary against the United States.”

No one has been executed for treason in the US, as far as Larson can reckon. And few people have ever been formally charged with treason. One of the most famous cases of disloyalty in American history was that of Julius and Ethel Rosenberg, accused of spying for the Soviet Union during the 1940s. They were charged, convicted and executed by the US in 1953 for the crime of espionage, not treason. But “there are a lot of things that people can do that betray the United States that don’t technically count as treason,” he says.

Since the 2016 election, Larson says people keep asking him about Trump and treason.

“Nothing that I have seen so far suggests that Donald Trump has technically committed the crime of treason, but there are lots of things that are not treason that are really, really bad and impeachable.”

“For a long time, these have been law school hypotheticals. But Trump has brought these hypotheticals into reality,” Larson says.

What is not clear though, he says, is what sort of behavior would eventually push this Congress into taking action against the president.