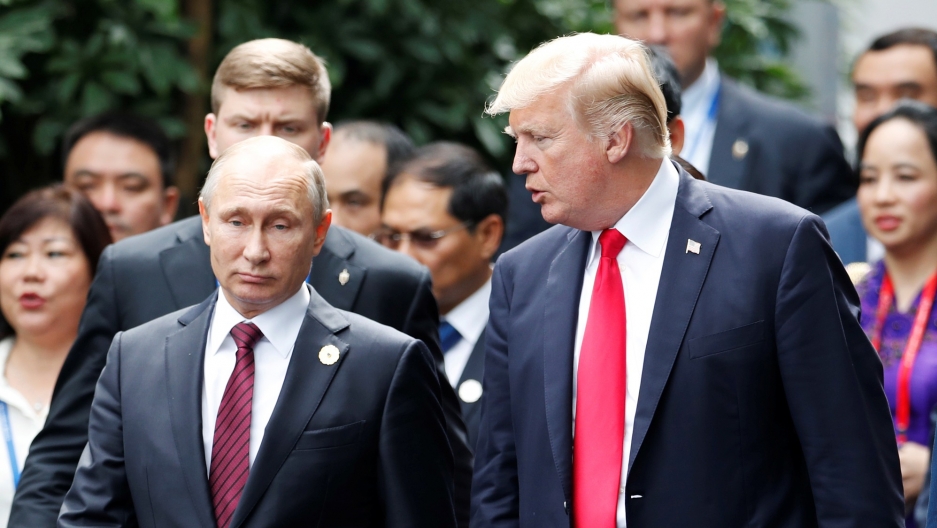 US President Donald Trump and Russian President Vladimir Putin talk during a summit in Vietnam, November 11, 2017.

Despite Russia's semi-pariah status among some Americans and US allies, the Kremlin has long been trying to arrange a summit, betting that Russian President Vladimir Putin and US President Donald Trump will get on well and stop a sharp downward spiral in bilateral ties.

While nobody on either side expects big breakthroughs, including on US sanctions, the summit is seen by Moscow as US recognition of Russia's status as a great power and an overdue US realization that its interests must be taken into account.

"The fact that a Putin-Trump meeting will happen says only one thing: that for all its hysteria, the United States is not able to isolate or ignore Russia," said Alexei Pushkov, a prominent Russian senator from the ruling United Russia party.

"It took a long time for Washington to get that idea, but it got there in the end."

Western grievances over Russia's annexation of Crimea, its backing of pro-Russian separatists in Ukraine and its support for Syria's Bashar al-Assad haven't gone away.

Other accusations, denied by Moscow, include that it meddled in US and European politics, supplied the weapon that shot down a passenger plane in 2014 over Ukraine and tried to kill a former Russian spy in Britain with a nerve agent.

Kremlin critics at home and abroad see Trump's decision to grant Putin a summit against that backdrop as conferring international legitimacy and status on Putin, something they say he doesn't deserve given the lack of meaningful change in Russia's policies internationally.

But in Russia, where the political system is obsessed with hierarchy, status and displays of raw power, Putin has "already got his victory," said Andrey Kortunov, head of RIAC, a foreign policy think-tank close to the Foreign Ministry.

"It allows him to make his point that Russia is not isolated, that Russia is a great power, and to some extent can even claim an equal status with the United States, at least in the security field," said Kortunov.

Expectations are high in Russia that Putin, with more than 18 years of global experience, will have the edge on Trump, who had not held elected office before he was inaugurated last year. The two men have met twice before at other events and spoken by phone at least eight times.

Vitaly Tretyakov, a political author, described Trump on state TV on the day the summit was agreed as "a neophyte in world politics" to whom Putin could explain Russian thinking and why Russia was right to annex Crimea.

Sergei Mironov, a senior lawmaker from the pro-Kremlin Just Russia party, said in another political talk show that Putin would definitely have the upper hand in Helsinki.

"... Vladimir Putin will give a real master class to the inexperienced politician Donald Trump," he said.

Start of a thaw?

For older Russians, the summit venue — Helsinki — reinforces Putin's narrative by evoking memories of Cold War show-downs between the Soviet Union and the United States at a time when Moscow was the capital of a real superpower.

While ties with China, India and the European Union may be even more important in economic terms, Russian politicians still measure their own country's soft and hard power globally against that of the United States.

Nobody in Russia expects the summit to resolve the differences that have led to painful US sanctions. A survey by state pollster VTsIOM published on Monday showed that more than half of 1,600 Russian adults polled predicted the summit would yield no tangible results.

But for Russian politicians who erupted in applause on learning that Trump won the US election in hopes of rapprochement only to see ties worsen, Helsinki offers a precious opportunity for a possible thaw in relations.

Hard-liners saw a rare visit to Moscow this month of a delegation of Republican lawmakers as proof the tide is turning.

"Six months ago we suggested to them (the lawmakers) that we communicate by Skype. For them it was political suicide, but now it's not," pro-Putin lawmaker Vyacheslav Nikonov, the grandson of Stalin’s foreign minister, told state TV this month.

Nikonov said Trump was now strong enough to pursue his own agenda.

"It's one of the signs that the wind is blowing in our sails, thanks in large part to Trump," he said. "I don't remember any pro-Russian (US) presidents, but I want to remind you that he (Trump) is one of the most pro-Russian politicians at the moment in the United States."

Kremlin-backed media have stressed the importance of the summit taking place on neutral territory to ensure Trump is not seen as having the upper hand.

"On neutral territory everyone will be calmer," Kiselyov, who is close to the Kremlin, said in a report on the subject.