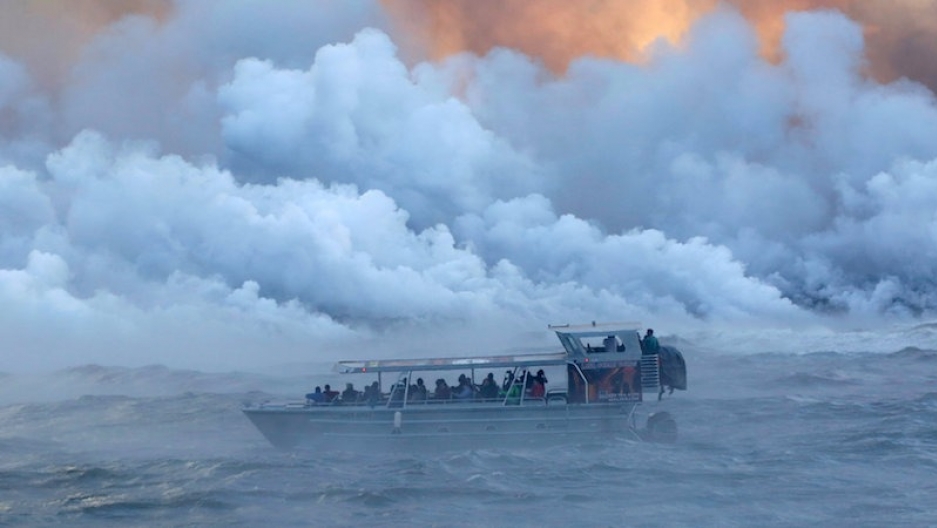 People watch from a tour boat as lava flows into the Pacific Ocean in the Kapoho area, east of Pahoa, during ongoing eruptions of the Kilauea Volcano in Hawaii.

Shane Turpin has for years taken tourists on boat rides to see lava oozing lazily down Kilauea's slopes and into the Pacific Ocean several miles away.

But when the river of molten rock burned down his and his neighbors' houses after the volcano erupted in May, he briefly stopped the tours.

"When the houses on the coastline were burning, we took those ships off," said Turpin, 39, who runs Lava Ocean Tours out of Hilo. "Those were my neighbors, I actually lived there."

But like many on the island trying to rebuild a life amid the destruction, he went back to work, catering to increased demand from tourists eager to witness the latest eruption of one of the world's most active volcanoes.

"Life always provides different opportunities; you either accept things and go forward with them or you don’t," he said.

Kilauea has shown no signs of quieting since it first began erupting on May 3. Lava spewing from "Fissure 8" has wiped out scores of homes in Kapoho by the Pacific. Scenic Kapoho Bay, a stop along Turpin's tours, is now filled with lava.

And, after a short respite, lava tourism is booming on the Big Island, with helicopter and boat tour operators trying to please tourists and show respect for thousands of locals who have lost homes or been evacuated.

Lava tourism has long existed on Hawaii's Big Island. Visitor numbers spike each time Kilauea, which has erupted almost continuously since 1983, sends a tongue of lava toward the ocean. The current eruption is one of the longest and most intense on record.

Visitor arrivals to the Big Island fell by 1.6 percent in May year-on-year after the eruption, after several cruise ships canceled port calls at Hilo and Kona, the island's two main cities, the Hawaii Tourism Authority said. Yet tourist spending actually increased by 3.3 percent to $173.9 million in May.

Figures for June have not yet been released.

Boat tours cost around $220 per person, with at least two other outfits competing with Turpin. Half a dozen companies also offer helicopter tours starting at around $300 per seat.

Residents have mixed feelings about noisy tour helicopters that fly over traumatized communities like Leilani Estates and Kapoho Vacationland, which lost hundreds of homes.

"They have helicopters starting as early as six in the morning and they go all day," said Rob Guzman, 47, an evacuee and guesthouse operator, who recently returned to his Kalapana home after an access road was reopened.

"At the same time, it’s putting more money into the local economy when we’ve been hit very hard," he added.

Tourists on helicopter tours will see a 180-foot tall lava geyser, an eight-mile river of molten rock from fissure 8 cascading toward the sea, and a newly made volcanic wasteland pockmarked with the remains of over 650 homes.

It was something Seattle tourist Steve Gaffin could not resist.

"I feel sorry for all the people who’ve lost their homes," said Gaffin, who planned to see the eruption on a visit to the island with his wife. But he added, "Why would you want to miss this? This is exciting!"

People can only witness the lava from the air or the sea. All lava flow hiking tours have been stopped, and the Hawaii Volcanoes National Park, where Kilauea is located, is closed to visitors. Over 80 people, some of them locals, have been cited for loitering in lava zones and face penalties of up to $5,000 and a one-year jail sentence.

That leaves some evacuees, displaced and unable to the pay the cost of tours, unable to view the spectacle of lava flows that destroyed their homes or forced them to flee. They are allowed to inspect their homes at regular intervals with a civil defense escort.

"Seeing the lava is a right and part of processing the disaster," said Hazen Komraus, head of a community association in the Kalapana area, who like many locals wants to see a ground viewing area established.

With this in mind, one helicopter tour company said it was giving any empty seats free of charge to evacuees to join the sightseeing tours and is offering them discounts if they want to hire a helicopter to survey their properties from the air.

"We've flown several dozen residents so far and have dozens more on the list," said Paradise Helicopters Chief Executive Cal Dorn, adding that he also donates up to $20 per seat on tourist flights toward evacuee relief efforts.