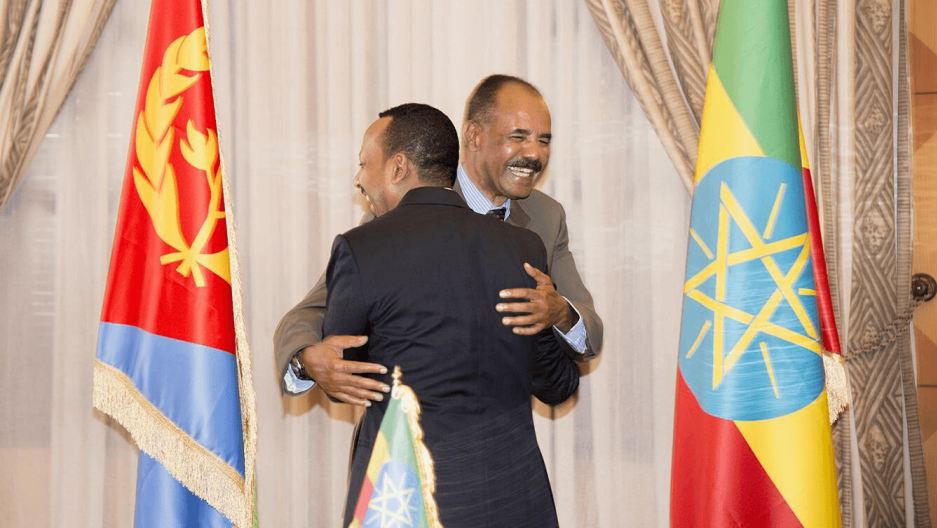 The ramshackle Ethiopian border town of Badme might not look like much but within both Ethiopia and neighboring Eritrea, it symbolizes a collection of deep grievances, anger and sorrow that have driven the two countries apart for decades, causing pain and loss and destabilizing the already volatile Horn of Africa.

Badme is where a terrible two-year war broke out in 1998 between the two countries that were once comrades in arms. Even after the 2000 ceasefire, Badme continued to act as a lightning rod for antipathy between the two after Ethiopia refused to comply with an internationally brokered ruling that ceded Badme to Eritrea.

But at the beginning of June, Ethiopian Prime Minister Abiy Ahmed stunned all sides by announcing Ethiopia was ready to give Badme back to Eritrea, leading to a rapprochement between the two sworn enemies that shows no signs of slowing down, with potentially momentous implications for the countries’ economies and peoples, and for the surrounding region.

After initially seeming as caught off guard as everyone else by Ethiopia’s announcement, Eritrea’s usually recalcitrant leader Isaias Afewerki said he accepted Abiy’s overtures as a “positive” move, before sending a delegation led by his foreign minister to Addis Ababa, Ethiopia’s capital, a week later. 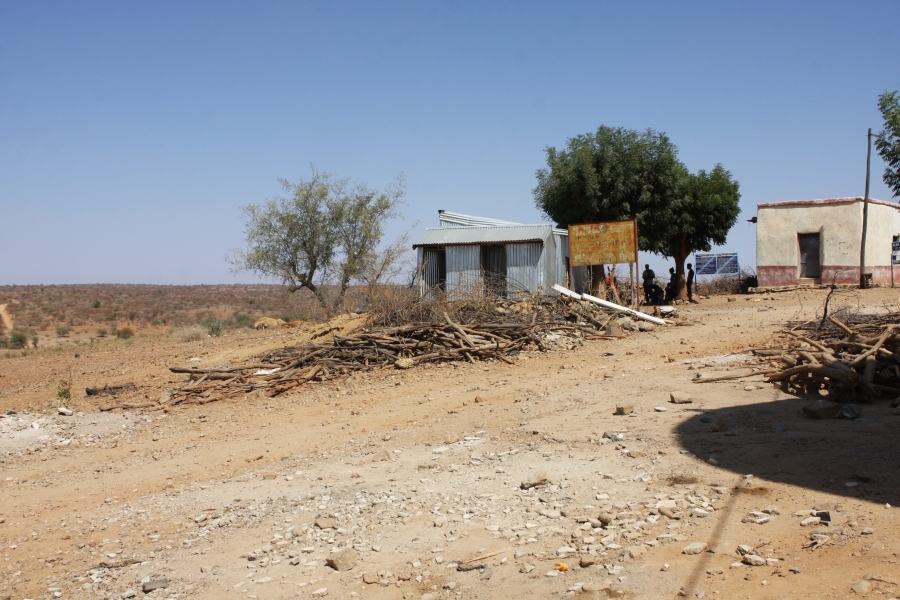 There’s not much to greet Eritrean refugees upon their arrival at the entry point compound in Badme, a dusty, sparse town with a military presence on the Ethiopian side of the border.
Credit: James Jeffrey/PRI

Then on July 8, Abiy became the first Ethiopian leader to visit Eritrea in nearly two decades. Despite Eritrea being directly north of Ethiopia, his flight had to fly east into Djibouti then north into Eritrea as the Ethiopia-Eritrea border remains a no-fly zone.

After touching down at the airport in Asmara, the Eritrean capital, Abiy embraced Isaias before conducting an official state visit during which Eritrean state television showed the two leaders smiling and laughing together.

“We have agreed to open up embassies in our respective countries, allow our people to visit each other’s cities, and allow our airlines and ports to operate freely,” Abiy said at a banquet capping the historic visit and officially announcing that relations would be normalized. “Love is greater than modern weapons like tanks and missiles. Love can win hearts, and we have seen a great deal of it today here in Asmara.”

Following more than two years of anti-government protests that demanded more freedoms and rattled Ethiopia, Abiy has swiftly turned Ethiopia’s stagnant political scene on its head since coming to power in April after the shock resignation of his predecessor. This has included a wave of reforms, releasing journalists and opposition figures from prison, and opening up the state-run economy.

“Historic,” Hallelujah Lulie, a political analyst specializing in the Horn of Africa, posted on Twitter in response to the visit. “This isn't peace between two ordinary neighbors. Ethiopia and Eritrea share complex memory and heritage. Recognising their intertwined past and common destiny will have a positive political and socio-economic dividend for them, and will redraw the geopolitical map of the Horn.”

Nearly 30 years ago, when Eritrea was Ethiopia’s northernmost province, the future leaders of the two countries were fellow rebels in the struggle against Ethiopia’s Communist dictatorship. But after defeating that dictatorship, and a peaceful referendum that gave Eritrea its independence in 1993, relations began to sour over political and economic frictions.

In 1998 Eritrea invaded Badme, claiming it was historically Eritrean land. Two years of fighting followed at a cost of more than $4 billion for two already desperately poor countries and which resulted in trench warfare and slaughter leaving more than 80,000 dead.

Even after the 2000 ceasefire, a state of war between the two countries persisted because of the Ethiopian presence in Badme that ignored the internationally brokered Algiers Peace Accord — the Ethiopian government felt the Ethiopian public wouldn’t tolerate the concession of the now-iconic town where so many Ethiopians lost their lives.

As a result, during the following decades relations between the countries continued to sour as the Ethiopian and Eritrean governments came to loathe each other. Meanwhile, along the border, the countries remained at loggerheads, with each military eyeing the other warily.

But now, in addition to saying it will implement the Algiers Peace Accord and the accompanying 2002 border commission ruling on Badme and other disputed territories, Ethiopia is looking to normalize relations with Eritrea on a much larger scale, both politically and economically.

Ethiopia has also officially submitted a request to UN Secretary-General Antonio Guterres for the United Nations to lift sanctions it imposed on Eritrea. On July 9 during a visit to Addis Ababa, the UN chief said he believed the need for UN sanctions against Eritrea will no longer exist following its peace deal with Ethiopia.

“Ethiopia’s change of heart towards Eritrea is genuine and is directly tied to the momentous changes taking place domestically,” Awol Allo, a lecturer in law at Keele University in law and frequent commentator on Ethiopia, wrote in an opinion piece for Al Jazeera. “Ethiopia’s new Prime Minister Abiy Ahmed has reconfigured the Ethiopian political landscape and its strategic direction, moving with incredible speed to drive changes aimed at widening the political space and narrowing the social divisions and antagonisms within the country.”

Part of the new prime minister’s strategy, Awol explains, has been to link political, social and economic transformation in Ethiopia to regional dynamics, and especially to Eritrea due to the historically close economic, cultural and social ties between the two countries.

“Every Ethiopian should realize that it is expected of us to be a responsible government that ensures stability in our region, one that takes the initiative to connect the brotherly peoples of both countries and expands trains, buses, and economic ties between Asmara and Addis Ababa,” Abiy announced before his visit to Asmara.

At the same time, gradually and not widely reported in the media, Eritrea’s relations with Arab countries, and even with the West, have improved, Hallelujah notes, making the Eritrean regime more open to rapprochement. Also, he adds, Saudi Arabia and the United Arab Emirates, which have forged increasingly close ties with Eritrea in the past few years, have in the last month probably helped mediate and lay the groundwork for the breakthrough.

The West, on the other hand, has been roundly criticized over the years for not doing more to heal the rift between Eritrea and Ethiopia, especially as the fallout badly impacted both the immediate region and beyond. Both countries have engaged in hostile activities against each other, including proxy wars in South Sudan, Somalia and even as far away as Chad.

Meanwhile, Eritrea continued to come off worse in the shadow of Ethiopia’s stronger regional sway and diplomatic clout. The smaller country became increasingly isolated and subjected to international sanctions. 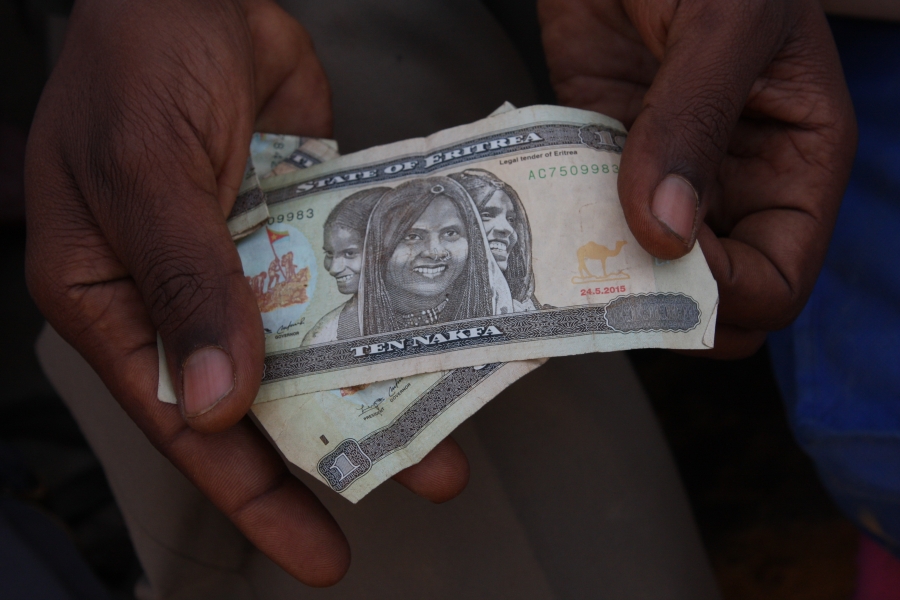 “It took us four days traveling from Asmara,” a 31-year-man said of the trek from the Eritrean capital, about 50 miles north of the border, holding all the money he has left: 13 Eritrean nakfa ($0.85) “We travelled for 10 hours each night, sleeping in the desert during the day."

As a result, life became increasingly miserable for Eritreans — hence the unending exodus of Eritrean refugees into Ethiopia — which was compounded by the Eritrean government using the border war with Ethiopia and the subsequent perceived existential threats as an excuse for the state becoming increasingly repressive and militarized.

Thus, the formal end of hostilities could open the way for an end to mandatory conscription in Eritrea, and even to reform of some sort in a country that’s been called the North Korea of Africa due to it being so closed and authoritarian — though achieving that is much harder than hugs and smiles for the cameras.

“Peace with Ethiopia is not the same as political, human rights and civil rights reforms in Eritrea and until those are changed people will keep leaving the country,” says Jennifer Riggan, an associate professor of international studies at Arcadia University in Pennsylvania, who studies Eritrean refugees in Ethiopia.

Also, even with normalization, there remains a complex process of returning disputed territory and figuring what happens to those there, ever accompanied by the possibility of disagreements flaring up.

“Peace is complicated,” Riggan says. “There are people whose communities will be split by the new border, Eritreans whose land is now in Ethiopia and Ethiopians whose land is now in Eritrea. And, while everyone is emotional and excited about peace, I sometimes wonder whether each country really understands the trajectory that the other has been on for the past 20 years.”

Nevertheless, many watching the whirlwind of events remain optimistic that the shared history of the two countries, underpinned by a shared culture, religion and familial ties, will prove more important than the differences.

Thousands of families separated by the war could now be reunited, as well as life made easier for mixed Ethiopian-Eritrean marriages, a common occurrence once. Commentators note that beyond the obvious economic and political benefits of the detente are psychological and emotional comforts after decades of trauma and loss.

“Let us celebrate as we remain cautious,” Vanessa Berhe, president of One Day Seyoum, a human rights organization working for the release of unjustly imprisoned people in Eritrea, wrote on Twitter amid a deluge of enthusiastic posts from Ethiopians and Eritreans alike.