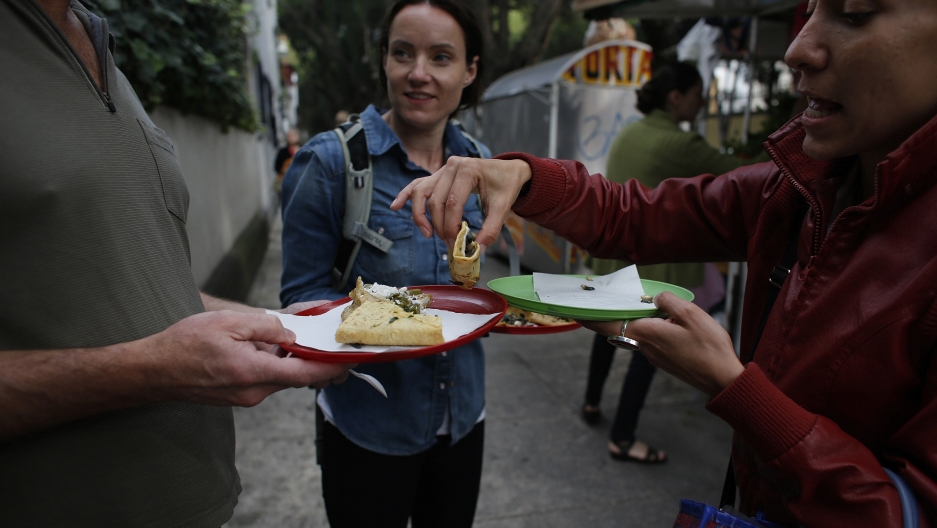 Eat Mexico guide Natalia Gris, right, splits quesadillas with tourists in Mexico City. Unlike the rest of the country, if you want a quesadilla with cheese in the capital, you have to ask for it. To millions in Mexico City, a quesadilla without cheese makes total sense. As cook Marta Martínez explains, her customers like their quesadillas filled with all kinds of ingredients: squash blossoms, mushrooms, sliced peppers — cheese is often an afterthought.

When I moved to Mexico City five years ago, most people gave me the same two or three pieces of advice: watch your purse on the metro, get a taxi company on speed dial and if you want cheese on your quesadilla, you better ask for it.

This last one I didn’t get: What do you mean, a quesadilla doesn’t always come with cheese? What else is a quesadilla if not a tortilla plus cheese?

To investigate, I went to a food market in the Coyoacán neighborhood, where I met Rael. When he first moved to Mexico City from the northern state of Sonora, he was just as confused as I was.

Related: This apartment may be the best place to hear live music in Mexico City

“It happened to me once where I ordered a quesadilla with chicken and I opened it and was like, ‘Where’s the cheese?’ [Then I realized] you have to ask for quesadilla with cheese,” he says. “In other parts of Mexico we just laugh about this and it doesn’t make any sense for us, but it’s our culture.”

A few years back, a meme circulated online that attempted to justify this cheeseless quesadilla with an etymology lesson. The meme argued that quesadilla doesn’t come from the Latin word for cheese. It’s from the indigenous Nahuatl word quesaditzin, meaning “folded tortilla.”

It was a gag, but many took it seriously.

Alberto Peralta, an anthropologist and culinary historian at Mexico City’s Anahuac University, speaks enough Nahuatl to know the letters are all wrong. He says the quesaditzin theory is “total nonsense.”

“The Aztecs didn’t use tortillas like we use them now,” Peralta says. “There’s no mention in any of the historical chronicles that says, ‘the Mexicans took their tortillas and filled them with stuff and folded them up and put them in their mouths.’”

Peralta says that when the conquistadors arrived from Spain, tortillas were used more like a utensil than a food. But he became so interested in the debate that he went to the oldest sources he could think of in search of the quesadilla’s origins — a 16th century Italian cookbook. The book describes a dish that sounds like a medieval version of a fried Pop Tart.

“It all seems to come back to these small medieval empanadas that were fried, sweetened and eaten as a portable food,” Peralta says. “They may or may not have had cheese in the middle, but there was cheese in the dough.”

Peralta thinks these empanadas crossed the Atlantic with the Europeans. In the absence of wheat, native corn masa was substituted for bread dough. In fact, what Mexico City calls a quesadilla is still called an “empanada” in Veracruz.

Over time, the snack took on regional variations. In the north, where farmers grow wheat and raise cattle, you’re more likely to find a quesadilla made from a flour tortilla, filled with melty cheese.

But in Mexico City, “we don’t have cows, but we do have a central market that is the largest in Latin America,” Peralta says. “I have everything I want at my fingertips. We're like Rome. Whatever you want, you can buy it here.”

Mexico City was at the crossroads of centuries-old trade routes running up and down the Americas, and Peralta says all that diversity made the menu more complex. Cheese became just another ingredient.

So who's right? The pro-cheese people from outside the capital, or the city folk?

In the Mexican quesadilla wars, the two sides may have to agree to disagree.