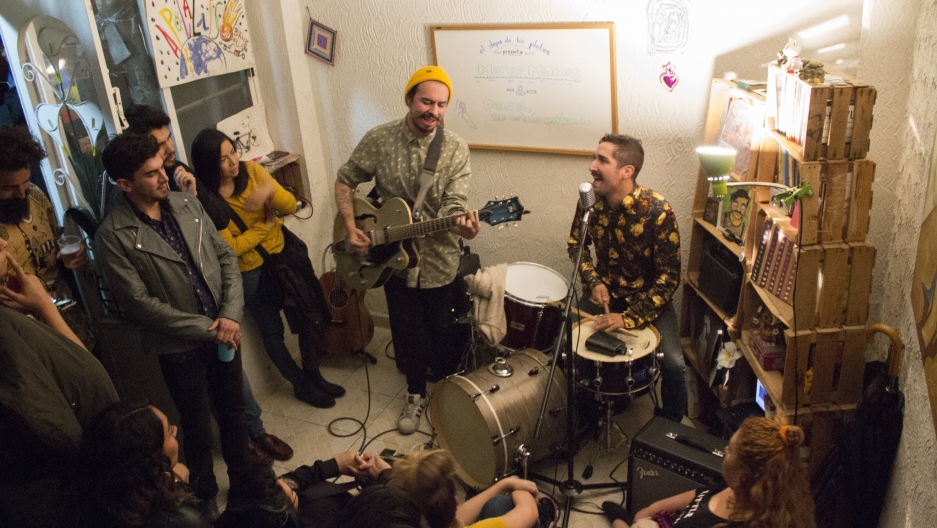 On a Monday night, down a dark street in Mexico City’s Narvarte neighborhood, I get buzzed in to a building and feel my way down a pitch-black alleyway toward an apartment in the back. Dozens of people spill out of the living room and onto the patio, straining to hear.

A duo called Daniel, Me Estás Matando is set up in one corner of the room. The rest of the apartment’s cramped first floor is taken up with people sitting on couches, on the floor, on the stairs, packed into the kitchen — some are even watching from the bathroom. They’re singing and clapping along to a style of music the band calls “bolero-glam.”

It doesn't look like much, but this is actually one of Mexico City’s most exciting music venues. It’s called El Depa de los Plebes — the plebes’ apartment.

“Where I come from, plebes is like ‘the friends’ or ‘the people,’” says David Aguilar, a singer-songwriter with a big name in the Mexican music scene.

It’s his furniture that everybody is sitting on. Every Monday night, Aguilar hosts concerts by other Latin American artists that he meets on the road — people like Grammy-winner Juan Pablo Vega of Colombia or Grammy nominee Ulises Hadjis of Venezuela. Artists like these usually play for thousands of people. Here, they play for however many can squeeze into Aguilar’s apartment — 30, 40, maybe 50 insiders lucky enough to know the address.

So far, there’ve been no complaints from the neighbors.

“This place is kind of an urban legend between musicians and singer-songwriters,” says Marco Mares, who is co-headlining a concert with Daniel, Me Estás Matando. It’s Mares’s first time playing his soulful pop songs at El Depa since learning of its existence from some musician friends last year.

“It’s kind of a secret, because even when there’s a flyer to announce the artists that are playing, there’s no address,” Mares says. “There’s just the artist’s name, the time, and that’s it. Well, there’s a phone number, [but] I’ve heard that if you call the phone number, nobody will answer.”

Mares says he’s honored to be invited to play at Aguilar’s place, which attracts a tight-knit crowd of indie musicians, producers and the occasional record label scout. But Aguilar says the night is less about industry schmoozing and more about celebrating the simple alchemy of melody and lyrics.

“It’s very underground,” Aguilar says. “These kinds of artists are just trying to make songs with all the liberties, without thinking of any specific market or any specific industry. You can feel that that air of freedom in the lyrics, in the musical forms.”

“It’s not a big spectacle like Las Vegas or Broadway,” Zepeda says. “Here, people come to quietly listen to songs that might be beautiful or moving or empathetic. It’s so intimate.”

Between sets, the crowd gets raucous, elbowing their way through the tight space to grab another beer, say hello to friends, or break out into spontaneous rap battles. But the moment the music starts up again, they get quiet enough that you can hear every guitar strum and breathy harmony.

Aguilar says he founded El Depa de los Plebes almost unintentionally two years ago when a friend asked if she could do a show in his living room. He kept it going even as his own career took off, as his way of giving back.

“A lot of people helped me when I was starting to sing,” he says. “People lent me their house so I could spend the night there, or gave me a ride to an airport or a bus station. People opened their own house so I could perform in some lost city in the north of Mexico —[there are] a lot of things that people did for me.”

El Depa asks for a 100 peso donation (about $5) at the door, which all goes directly into the artists’ pockets.

“It’s a place where you can come and sing your songs, whatever genre or whoever you are, even if you are no one or already [have] an established career,” Mares says. “These kinds of spaces are really giving opportunities to emerging singer-songwriters.”

Tomorrow they might perform for the masses, but tonight they play for the plebes.