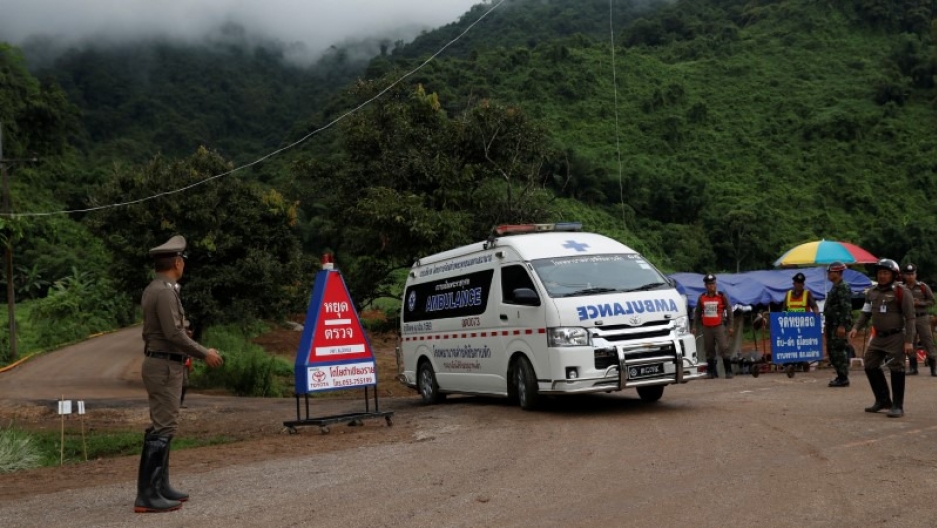 An ambulance is seen Tham Luang cave complex, where schoolboys are trapped in a flooded cave, July 9, 2018.

Rescue workers in Thailand brought out on Monday two more people from a flooded cave where 12 boys and their soccer coach were trapped for more than two weeks, apparently taking the total number rescued to seven.

A Reuters witness near the Tham Luang cave in the northern province of Chiang Rai saw medical personnel carrying two people out of the cave to waiting ambulances on Monday evening.

The rescue operation was launched on Sunday and four boys were brought out that day. They and were in good condition in hospital, officials said.

A fifth boy was brought out earlier on Monday, a navy official said.

Reuters could not confirm the identity of the two people brought out in the evening and the chief of the rescue mission, Narongsak Osottanakorn, asked about the two, declined to comment, saying a news conference would be held soon.

The "Wild Boars" soccer team and their coach got trapped on June 23 when they set out to explore the vast cave complex after soccer practice, when a rainy season downpour flooded the tunnels.

British divers found the 13, huddled on a muddy bank in a partly flooded chamber several miles inside the complex, on Monday last week.

The dangerous bid to rescue the boys — aged between 11 and 16 — got going again hours earlier on Monday after a break to replenish oxygen supplies and make other preparations deep inside the cave complex in northern Thailand's Chiang Rai province.

Authorities have said the mission could take three or four days to complete. It is a race against the clock with heavy rain expected in coming days, which would again dangerously flood the tunnels.

Earlier, Narongsak told a news conference a team had gone into the cave to rescue the remaining boys at 11 a.m., and he expected good news.

Thirteen foreign divers and five members of Thailand's elite navy SEAL unit make up the main team guiding the boys to safety through narrow, submerged passageways that claimed the life of a former Thai navy diver on Friday.

Narongsak said that the "same multinational team" that went into the cave on Sunday to retrieve the first four boys was deployed on Monday.

He did not say how many boys the team hoped to bring out on Monday.

On Sunday, divers held the first four boys close to bring them out, and each had to wear an oxygen mask to enable normal breathing, authorities said.

Narongsak said rescuers had to tighten a guide rope as part of their preparations before this second phase of the rescue on Monday.

Interior Minister Anupong Paochinda told reporters the four rescued boys rescued on Sunday were in good health in hospital but did not give details. There was no word on the condition of the fifth boy brought out earlier on Monday. 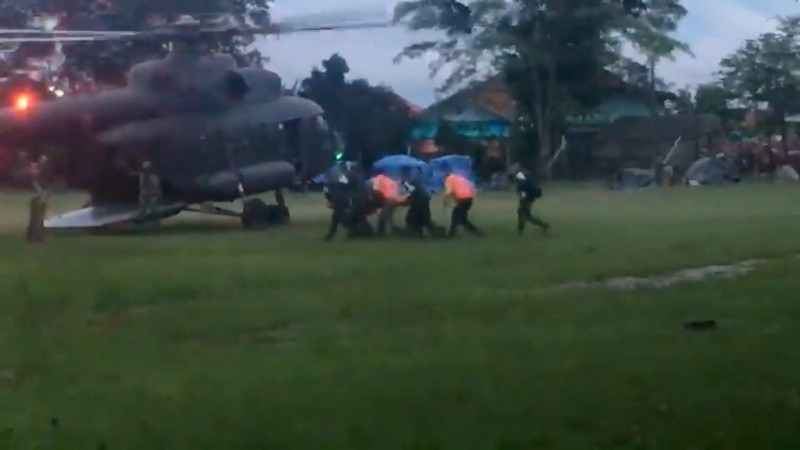 Paramedics, believed to be carrying a boy who has been evacuated after being trapped inside a flooded cave, approach a helicopter in Chiang Rai, Thailand, July 8, 2018, in this still image obtained from social media.

Authorities have not confirmed the identity of the first four boys rescued. Some of the boys' parents told Reuters they had not been told who had been rescued and that they were not allowed to visit the hospital.

Narongsak said the first four rescued boys had not been identified out of respect for the families whose sons were still trapped, adding that the boys were being kept away from their parents due to fear of infection.

"The four children are well at Chiang Rai Prachanukroh hospital. But they still need to be kept away from their parents and others due to fear about infection," he said.

Somboon Sompiangjai, 38, the father of one of the trapped boys, said parents were told by rescuers ahead of Sunday's operation the "strongest children" would be brought out first.

"We have not been told which child has been brought out ... We can't visit our boys in hospital because they need to be monitored for 48 hours," Somboon told Reuters.

At least nine ambulances loaded with stretchers and blue oxygen tanks waited by the mouth of the cave on Monday. Soldiers, medics, engineers and volunteers in yellow shirts milled around but the mood was relaxed.

"I feel very happy, everybody is happy," said Hnin Jaiwong, the mother of one of the trapped boys, 13-year-old Sompong Jaiwong.

"I don't know if he is out, they didn't tell us," she said as she rested in a hut close to the mouth of the cave.

The cave complex is off-limits during the rainy season, which usually runs from May to October, when downpours can quickly flood it.

Relatives said the boys had been inside the labyrinthine complex during the dry season.

The fate of the boys and their coach has gripped Thailand  and drawn international media attention.

The president of soccer's governing body, FIFA, has invited the boys to the World Cup final in Moscow on Sunday if they make it out in time.