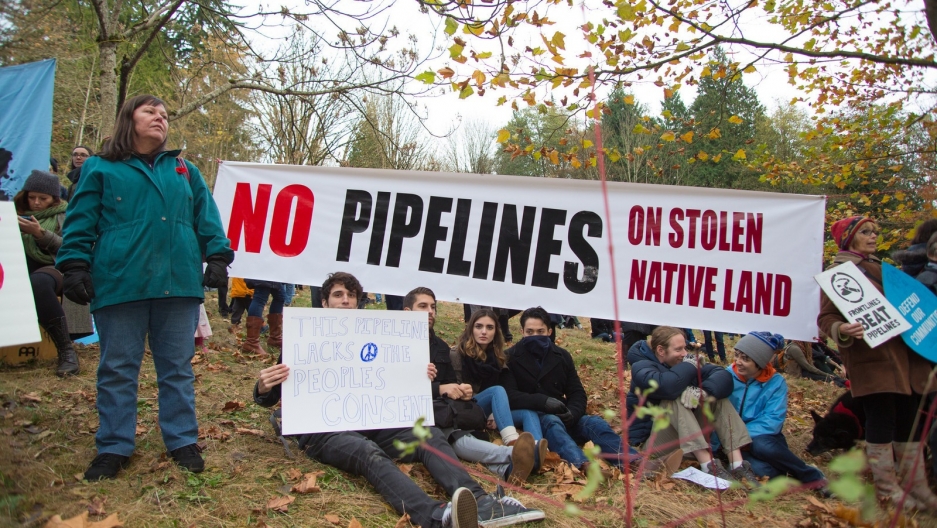 Protestors hold up signs at a rally against a proposed Kinder Morgan oil pipeline expansion on Burnaby Mountain in 2014 in British Columbia. In late May, the Canadian government announced it would fund an expansion project for the Kinder Morgan Trans Mountain Pipeline.

“Canada is back.” Justin Trudeau said those words shortly after being elected prime minister of Canada in 2015. He talked about how the country was ready to step up its efforts to become more of a player in the global marketplace, as well as a change agent for minimizing the impact of global warming.

Trudeau, who ran as a member of the country’s Liberal Party, was one of the most ardent of the world leaders at the United Nations climate change conference where the Paris Agreement was signed with a goal of keeping Earth’s temperature from rising no more than 1.5 degrees Celsius from pre-industrial levels.

But to many of those who voted for him, Canada may be back in a different — and unfavorable — way. After private financiers would not back an expansion of the Kinder Morgan Trans Mountain Pipeline, the Canadian government came to terms to pay for both the system and the expansion project, taking on its $4.5 billion price tag in Canadian dollars in the process. The decision came in spite of many protests from climate activists and concerned citizens alike. As part of the purchase, the Canadian government is now working with the Kinder Morgan Canada Limited board to find a third-party buyer for the project.

Mike De Souza serves as the managing editor of the National Observer, a Canadian news website. De Souza says in 2015 many who voted for the prime minister saw him as a fresh start for the country after his predecessor, Stephen Harper, gained a reputation for kowtowing to fossil fuel companies.

“There was a period over the past 10 years in which the government was not wanting to talk about climate change where scientists were discouraged from speaking to reporters,” De Souza says. “There was a lot of [scientists] that were saying that they felt muzzled, and that they couldn't even talk about the issue.”

De Souza and his fellow reporters conducted an investigation that found the Trudeau Administration — which had fixing Canada’s environmental laws as one of its major rallying cries on the campaign trail — immediately began receiving phone calls from Kinder Morgan about the pipeline after the election.

“Our reporting shows that Kinder Morgan was lobbying not only politicians but also high-ranking public servants who had risen to positions of significant power within the government during the Harper years and had gotten accustomed to doing things the way that Harper wanted them to be done,” De Souza says.

In fact, De Souza says one of the first calls to Trudeau's office was from Ian Anderson, the president of Kinder Morgan Canada. Shortly thereafter, talks began about how a review of the former environmental policy could be expedited. "They did add some layers… but their minds were made up,” he says.

De Souza says that Trudeau’s representatives have been in continual contact with members of the First Nations — the groups of indigenous people (primarily Inuit and Métis) living in Canada who live south of the Arctic Circle. It is their lands that would be highly affected by the pipeline’s expansion, which would create an easier path to send tar sands from Alberta to the country’s west coast of British Columbia. The tar sands, which contain sticky substances called bitumen, eventually find themselves in countries in Asia and the Pacific where they are then refined into gasoline and other petroleum products. One problem? A gallon of gasoline made from tar sands will produce about 15 percent more carbon dioxide than one from conventional oil, according to the Union of Concerned Scientists.

The reactions from the First Nations leaders have been mixed, De Souza says.

“There are some First Nations that support this project that want to get an ownership stake in it, and maybe there's a solution for a better project that could be more environmentally responsible in the future,” De Souza says. “But right now, that consensus isn't there, and there's certainly not consent from a lot of key First Nations that would be directly affected by this project.”

By going ahead with the purchase of the pipeline, De Souza says the Trudeau Administration is making its case to the rest of the world that Canada can produce oil in a more responsible way using its cap-and-trade system, which puts a definitive price on greenhouse gas emissions.

“So, that’s in a nutshell what the political argument is: Let us build this pipeline and then we can control the oil and gas industry's carbon pollution,” De Souza says.

Since the announcement of the government’s purchase, De Souza says there has been a noticeable amount of environmental groups and civil society groups “swarming” political offices across the country to protest the decision. He says the federal government is collectively feeling the pressure placed by its citizens.

“You have people who have knocked on doors and spent hours volunteering their time to campaign for the liberals in the last election that are very angry … saying, ‘I spent all this time campaigning for you and I feel betrayed,’” De Souza says.

Canada’s next federal elections are a year away, but many already believe there is potential the expansion project could doom Trudeau's re-election bid, De Souza says.

“The prime minister himself has a certain personal popularity and way of connecting with people that perhaps helps them out, but if [Trudeau and other Liberal Party politicians] want to be re-elected, they're going to have to find a way to navigate this issue, particularly after deciding to spend public money on the project,” he says. “They have to find a way to get First Nations more involved in this project, or they have to find an alternative.”