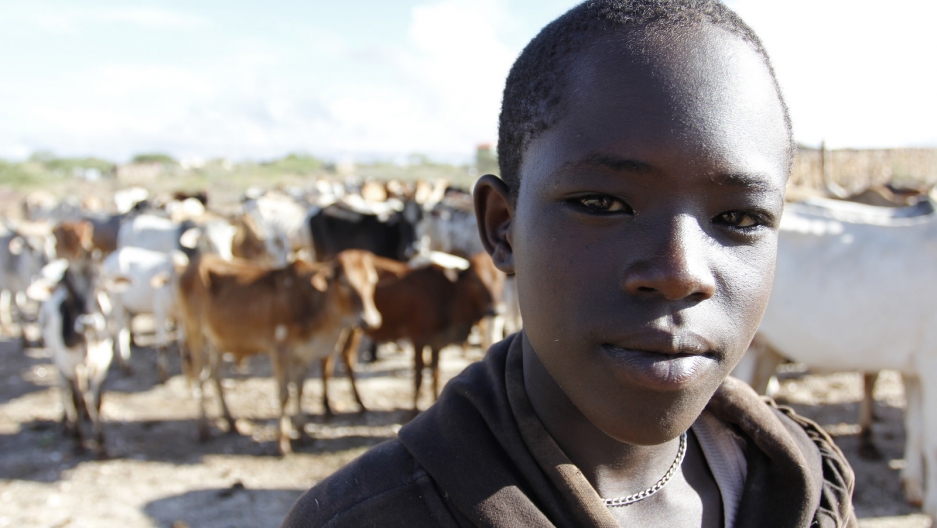 A child stands in front of a herd of cows in Samburu County in Kenya, one of the many tropical countries that would have a larger hit to its overall gross domestic product if the overall global temperature continues to steadily rise. Climate change has lead to Kenya — and other nearby countries — to receive less rain than it used to, creating a struggle for pastoralists to find the needed pastures for cows and other animals.

When delegates at the United Nations Climate Change Conference left Paris in December of 2015, they did so with the international pact to allow temperatures to raise no more than two degrees Celsius above pre-industrial levels — in what later became known as the Paris Agreement.

There was also an established consensus, though, that allowing only a one-and-a-half degree increase would be ideal.

Closing in on the third anniversary of the historic agreement, it appears unlikely either of those goals will be reached, based on the inability to construct an actionable plan on which all of the countries can agree, heading into the latest global climate change conference in Poland later this year.

Still, a team from Stanford University recently crunched the numbers to create an estimate of how much money — based on the collective gross domestic products (GDP) alone — the planet could save by reaching that one-and-a-half degree bump.

The final tally? Somewhere in the ballpark, or stratosphere, of $30 trillion. Furthermore, the team says it would cost less than half a trillion dollars to reach that more restrictive goal.

“To us, the cost-benefit calculation looks wildly favorable for stronger mitigation,” says Marshall Burke, an assistant professor in Stanford’s Department of Earth System Science and a center fellow for the Center of Food Security and the Environment. Burke was the lead author of the study’s academic paper, which was recently published in the journal Nature.

“Other folks have tried to calculate the cost, right? What would be the differential cost in terms of how much money do we have to spend to transition our energy sector away from dirty fuels to cleaner fuels, for instance? So, what would be the total economic cost around the world? And the estimates that other folks have come up with are on the order of half a trillion dollars. And so that is basically an order of magnitude lower than what we calculate the benefits to be of undertaking those actions,” Burke says.

Breaking down the data

Burke and his associates based their research around a historical understanding of how countries have reacted to climate change in the past. The team searched through 50 years of data centered on economic input taken from countries around the world. They found that poor countries would be the largest beneficiaries of the smaller rise in temperature — especially those that already have a very warm, tropical climate.

On the flip side, Burke’s findings showed that the economies of traditionally cold countries actually improve with a slight bump in temperature.

“You can imagine if you're in a really cold place, and you warm up the temperature a bit, we're more comfortable and we’re likely more productive,” Burke says. “And it turns out, that shows up really clearly in the GDP data of these countries.”

Burke says a great case study for this trend can be found in Iceland, a Nordic island country located more than 1,300 miles from mainland Europe.

One of the biggest impacts for most developing countries would be felt in their agricultural sectors, Burke says, adding that “any losses in agriculture are magnified for them” given their reliance on being able to grow and sell crops to other countries.

Warmer weather has an even more widespread effect on the collective labor force of a country, Burke says, being linked to decrease productivity in manufacturing jobs and even lower cognitive performances (including lower standardized test scores on days that are significantly hot).

“We see overall declines in cognitive function, and so, these likely have influence on many factors that are far beyond agriculture,” Burke says.

In spite of the gargantuan savings that would result from the smaller bump in temperature, Burke admits that the odds of the planet reaching its goal — even with full cooperation from the United States — “right now are pretty low.” Meeting that objective would require the creation and worldwide implementation of carbon capture technologies that have to yet to be invented, allowing the world to pulling out more carbon than is currently being emitted into the atmosphere.

“The optimist in me wants to believe that we can get there and perhaps numbers like ours would suggest that the economic returns of getting there are higher than we thought, but… we are certainly not on path right now to meet these more stringent goals,” Burke says.

“I think bigger picture, what our estimates suggest that any effort we put in to reduce warming is likely to generate large economic benefits around the world. So, right now are headed for three degrees Celsius [in temperature increase]. If we can keep it below that, that's going to generate benefits. If we can go all the way to two, that generates even more benefits. So, what our results again suggest is that there are large benefits from even relatively modest reductions in future warming.”