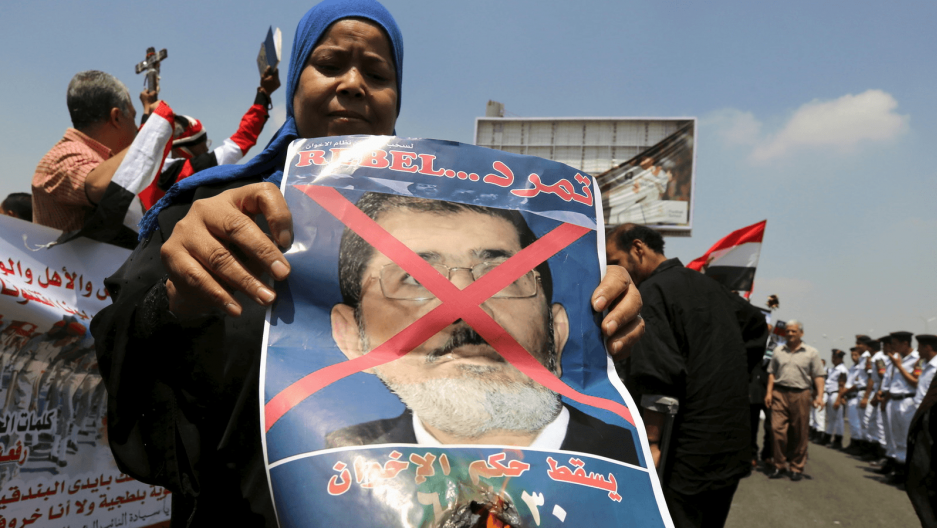 A woman burns a portrait of ousted President Mohamed Mursi at the funeral of Egyptian public prosecutor Hisham Barakat, on the second anniversary of the June 30 protests, in Cairo, Egypt, June 30, 2015.

The nationwide protests lasted for four days. And like many among the millions of demonstrators around Egypt, Bahgat said he sought to “redo the transition” to democracy after popular protests toppled autocrat Hosni Mubarak in 2011. Mursi was elected the following year but alienated many who saw him as preoccupied with establishing political control and betraying the revolution.

Many Egyptians celebrated on July 3, 2013, when the then-head of the armed forces and Defense Minister Abdel Fattah al-Sisi announced on television that the military had removed Mursi and that a new roadmap had been established.

Bahgat says that was the moment when he became “apprehensive.”

He was right to be.

The “reset” Bahgat had sought never materialized. Instead, what has followed is a return to authoritarian rule and repression under Sisi, who stepped down as army chief to become president in 2014. Some observers say his crackdown on opponents, dissent and the press is far worse than anything Egyptians experienced under Mubarak. After Sisi won a landslide re-election victory in March, some hoped he would soften his approach. But as he began his second term this month, he showed no signs of backing off.

Tens of thousands of Egyptians are in prison, enforced disappearances are the norm, protests are practically outlawed, civil society has been shuttered, Egypt is one of the worst jailers of journalists in the world, censorship is at its highest level and there is barely any political opposition left. Sisi’s supporters say his tough leadership is necessary to fight terrorism and strengthen the economy.

Related: Meet the winner of the ‘Nobel for human rights’ that Egypt doesn’t want you to know about

Bahgat has personally been targeted — both as a human rights defender and a journalist. He founded the Egyptian Initiative for Human Rights (EIPR) in 2002. In early 2014, he left the organization to join the online news outlet Mada Masr, which began publishing shortly before Mursi was removed and is known for its critical coverage of the government and investigative journalism.

Bahgat was detained by military intelligence for two days in November 2015 after an investigative report for Mada Masr on a secret military trial of officers accused of plotting a coup.

But he’s now facing trial for his old job with EIPR, alongside other human rights leaders, accused by the state of helping nongovernmental organizations acquire illegal foreign funding to harm Egypt’s national interest. The case dates back to 2011, but the state revived it two years ago. Amnesty International calls it “politically motivated.” If found guilty, Bahgat could be imprisoned for life.

“It’s been hard, obviously. It’s not just the uncertainty,” he said. “I was slapped with a travel ban that still stands and then [in] late 2016, all my assets were frozen and my bank account.”

Related: American charity worker in Egypt is acquitted after three years in jail

And on top of this, Bahgat’s employer, Mada Masr, has been blocked from the Egyptian internet since May 2017, along with more than 500 other websites, including VPNs. Mada Masr initially posted its content on Facebook and is now using mirror sites, but they have lost key advertising revenue. They’ve turned to other sources of income, like providing editorial services to external clients. But still, Bahgat says “there’s a certain degree of blacklisting” with the block, putting off potential clients and businessmen.

Many of those targeted by the state since Sisi’s rise to power have fled the country — like the journalist and researcher Mohannad Sabry.

After Mursi’s ouster, Sabry found it increasingly hard and dangerous to conduct research in North Sinai. An ongoing Islamist insurgency has operated there since the revolution and it has become a military zone. The Egyptian government has restricted access for journalists and human rights groups.

Related: The arrest of an Egyptian satirist shines a light on the government's system of intimidation

“I remember the last two times I went to North Sinai for work. I received a call from a friend telling me that the military checkpoints are looking for me, they are stopping vehicles asking for my name … it was a terrifying situation,” Sabry said, speaking from his current base in Istanbul.

Sabry points to the plight of fellow journalist and researcher Ismail al-Iskandarani as a reminder of why he can’t return to Egypt. Last month, a military court handed Iskandarani a 10-year sentence on charges of publishing false news and military secrets for his work on army operations in North Sinai.

Researchers in Egypt have become more cautious after the murder of Giulio Regeni, an Italian doctoral student from Cambridge University. His mutilated body was found in a roadside ditch near Cairo two years ago. Italian prosecutors said in January that Regeni was killed over his research on Egypt’s independent trade unions. They didn’t accuse anyone of the crime, though many suspect the Egyptian police.

In this environment, few people can feel totally immune — not even when you’re a high-profile politician and the nephew and namesake of a previous president, like Mohamed Anwar Sadat. Sadat, a prominent former parliamentary dissenter and critic of the government’s human rights record, was expelled by parliament last year for denigrating it in correspondence with foreign organizations — charges Sadat denies.

Sadat was a lawmaker under Mubarak and during the short-lived rule of Mursi. He says today’s parliament is brimming with government loyalists in a way he’s never witnessed before.

“I have never ever seen a parliament like this, never,” he said. “You have no right as a parliamentarian to practice your basic authority, which is in the constitution.

“The parliament is fully controlled by the security from outside,” he added.

Earlier this year, Sadat withdrew his bid to challenge Sisi in March’s presidential elections, citing state harassment and violations, in an election where all other genuine contenders were intimidated out of the race or arrested.

Sadat knew he would never win but said he thought it would “give a message to the people that no one lasts forever. … And also, for me, it was a message to Sisi: He should open up, there has to be a debate.”

Just three months after Sisi’s re-election, there are no signs he intends to do that. Critics say he’s doubling down and targeting the small number of remaining dissenters.

Several activists have been arrested, including a prominent blogger, a satirist, a female human rights defender who posted a video on Facebook complaining about sexual harassment and a member of the April 6 Youth Movement, which played a leading role in the protests against Mubarak in 2011.

A Washington University doctoral student conducting research in Egypt on its judiciary has also been detained after disappearing for four days.

Bahgat expects things to worse under Sisi. The president’s supporters are maneuvering for a constitutional change to extend his rule beyond the current two-term limit, but Bahgat says the situation can’t continue forever given the “degree of repression together with the impoverished and economic pressures and this huge young population” of Egypt.

“But you can’t fight something with nothing,” he added, “so right now there is no form of opposition really in the country.”