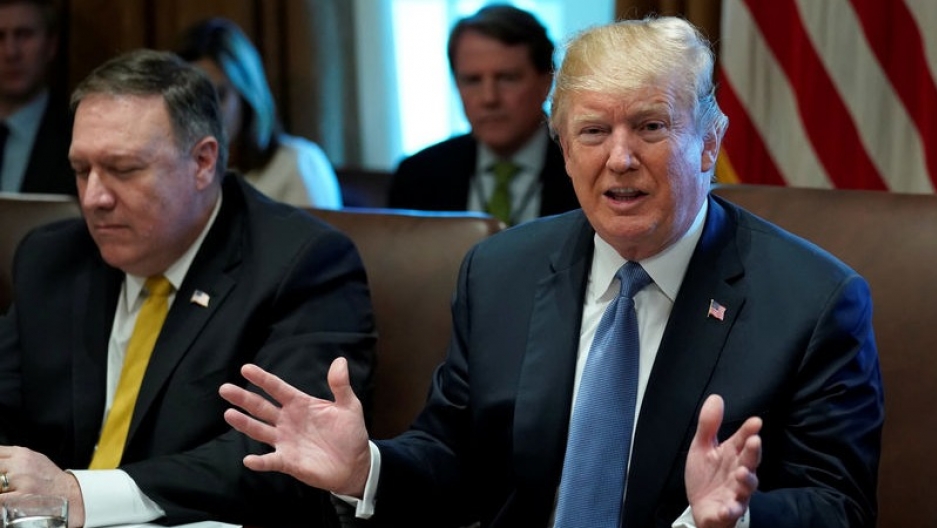 US President Donald Trump holds a cabinet meeting at the White House in Washington, June 21, 2018.

While no decision has been made, the Department of Health and Human Services (HHS) has assessed three military bases in Texas and would review another in Arkansas to examine the readiness of housing up to 20,000 immigrant children, officials said on Thursday.

Pentagon spokeswoman Dana White said HHS had asked the Pentagon "to determine its capabilities to provide up to 20,000 temporary beds for unaccompanied alien children" at military installations."

White did not give further details and it was not clear how many of the children who could be sent to the bases are already being detained at other facilities.

Trump and his administration have faced fierce criticism in recent weeks for separating more than 2,300 children from their families in order to prosecute their parents for crossing the border illegally.

Video footage of children sitting in cages and an audiotape of wailing children sparked worldwide anger.

Trump backed down on Wednesday, signing an executive order to keep families together in detention during immigration proceedings.

But it remained unclear late on Thursday how and when those children would be reunited with their parents, and where families would be held while the parents face criminal charges.

It was also not clear if the government would keep prosecuting cases against people caught crossing the border illegally.

While prosecutors said they were not dismissing any cases, some hearings on Thursday did not proceed as scheduled. In McAllen, Texas, 17 immigrants were told by their public defenders that their cases were not proceeding for now.

Before one deportation flight left for Honduras from Texas on Thursday, US officials asked who had children in detention in the United States and the four who put up their hands were not put on the flight, deportees arriving in Honduras told Reuters.

But the hooded, olive-green jacket she wore as she boarded the plane for Texas — daubed with the words "I REALLY DON'T CARE, DO U?" on the back — appeared to undercut the message of compassion.

The White House responded to criticism by saying there was no hidden message. "It's a jacket," said Stephanie Grisham, Melania Trump's spokeswoman. "After today's important visit to Texas, I hope the media isn't going to choose to focus on her wardrobe."

The president said, however, the message was directed at news organizations, which he dubbed the "Fake News Media."

Trump made cracking down on illegal immigration a key part of his presidential campaign in 2016, but his recent policies have upset many lawmakers inside his own Republican Party.

Mike Coffman, a Republican in the House of Representatives, called on Trump on Thursday to fire senior White House adviser Stephen Miller, who has pushed for a hardline approach to immigration.

"This is a human rights mess. It is on the President to clean it up and fire the people responsible for making it," Coffman said.

Trump could face renewed criticism if thousands of immigrant children are soon sent to be housed on military bases.

It would not be the first time for such an arrangement. In 2014, the Obama administration set up temporary emergency housing at three military bases during a wave of unaccompanied children — most from Central America — arriving at the US-Mexico border.

US Defense Secretary Jim Mattis said on Wednesday the Pentagon would not lead such a mission but would help if requested.

"We have housed refugees. We have housed people thrown out of their homes by earthquakes and hurricanes. We do whatever is in the best interest of the country," Mattis told reporters.

While Trump has backed away from taking children away from their parents, it is not clear how his administration will handle immigration cases on the border going forward.

It says it will stick to a "zero-tolerance" policy that means anyone crossing illegally is prosecuted.

Some legal experts said the wording of the executive order was ambiguous and that family separations could continue.

Indefinite detentions run afoul of the so-called Flores settlement, a 1997 agreement that has been interpreted by courts as meaning children cannot be detained for more than 20 days.

On Thursday, the Justice Department asked a federal court in California to ease curbs on the detention of children who enter the country illegally with their parents, the most immediate issue facing the executive order.

It said the recent surge in the number of illegal border crossings by families had created a "destabilizing migratory crisis" that put those families at risk and threatened public safety.

"Under current law and legal rulings, it is not possible for the US government to detain families together during the pendency of their immigration proceedings. It cannot be done," the Justice Department said.

US District Judge Dolly Gee, who oversees the Flores settlement, rejected a similar argument by former President Barack Obama's administration in 2015 to extend detentions of families.

The administration also has sought a permanent legislative fix on the issue, but the US House of Representatives on Thursday rejected a bill favored by conservatives that would have halted the practice of splitting up families and addressed a range of other immigration issues.

The bill was defeated in a 231-193 vote, with 41 Republicans joining the opposition. The House also postponed, likely until next week, a vote on a more moderate bill in order to try to drum up more support.

Both bills have received backing from Trump but are opposed by Democrats and immigration advocacy groups. They would fund the wall Trump has proposed along the border with Mexico and reduce legal migration.