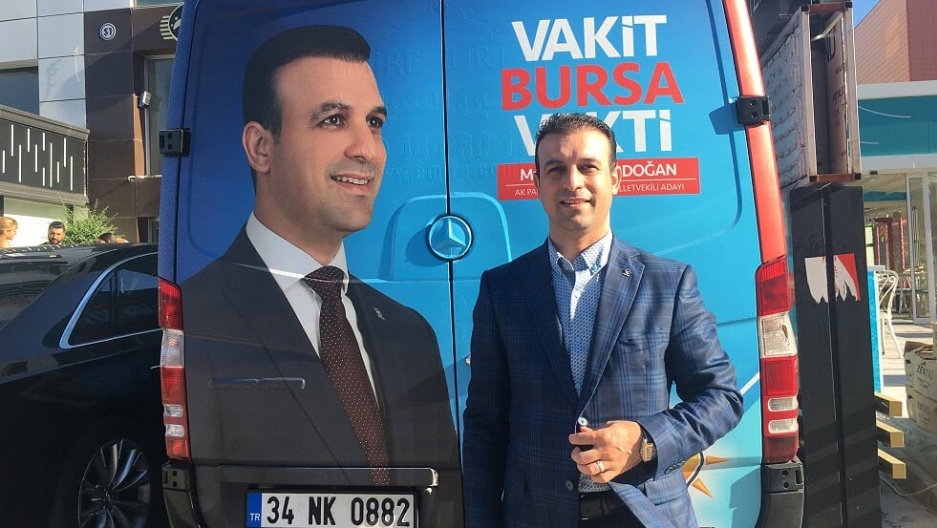 Muhammed Erdogan, the first Syrian-turned-Turkish citizen to run for parliament in Turkey, in front of his campaign truck.

Muhammed Erdogan is six hours late for his meetings in the headquarters of his construction business in the northwestern Turkish city of Bursa. He has three cell phones and they all keep ringing.

Erdogan says he’s still recovering from the previous day’s campaigning in the hot sun for his hero and namesake, Turkish President Recep Tayyip Erdogan. Presidential and parliamentary elections are set for June 24 and Muhammed Erdogan is running as the only Syrian Turk in the race.

The 34-year-old businessman became a Turkish citizen in 2016 and changed his last name from al-Sheikhouni to Erdogan as a way to show his loyalty to the Turkish president. Turks are now calling the candidate “the Syrian Erdogan.”

His allegiance to President Erdogan earned him a nomination with the ruling Justice and Development Party (AKP) which has been in power for the last 15 years. The conservative, popular party initially welcomed Syrians refugees however Muhammed Erdogan has struggled to win acceptance from Turks. He says he has to keep proving he’s Turkish, including with members of his own party — even though his roots lie in the country.

“I am a Turkish citizen as well. My family immigrated from Turkey to Syria under the Ottomans. My grandparents were Turks. I am a Turkmen,” explains Erdogan.

In the wake of rising inflation and double-digit unemployment in Turkey, once-welcoming Turks have become resentful of the 3.4 million Syrians who fled the civil war and sought refuge here. At least 55,000 Syrians have become citizens in the last few years as part of a Turkish government program to grant citizenship to skilled, educated immigrants from Syria. But only about 30,000 are eligible to vote, according to several Turkish media reports.

In a tense election in which both the ruling AKP and opposition parties are vying for votes, Syrians have become the scapegoats for economic struggles, says Omar Kadkoy, a research associate at the Economic Policy Research Foundation of Turkey in Ankara.

“I feel [tensions] are on the edge of exploding if politicians don’t tone down statements against Syrians,” Kadkoy says.

Muharrem Ince, President Erdogan’s strongest rival in the elections, criticized the government for allowing 70,000 Syrians to go home for the Eid holiday, and then return to Turkey. “If you are able to go there, stay 10 days and return, then you could stay there permanently. Why are you coming back? … Is this [country] a soup kitchen? My country is full of jobless people,” Ince said on Turkish TV in May.

When Ince campaigned in Bursa, he publicly disapproved of the Syrian-Turk’s candidacy. Muhammed Erdogan says he is offended by Ince’s politicking but tries to focus on the positive.

“I have not done anything immodest or immoral to this country. I am devoted to the whole country and will always be,” he says.

Although some are critical of Muhammed Erdogan’s candidacy, many feel it is a symbolic gesture of inclusion from the ruling AKP party, and Syrians in Turkey are expressing excitement to see him run.

Asmaa Omar, 22, of Istanbul University is a Syrian who also received her Turkish citizenship. She has her reservations about the AKP's role in Syria but says this could add a Syrian voice in the government. “It’s my first time to vote. It might change something maybe. To see a Syrian running for parliament is very exciting ... It’s good to see we have representation.”

Erdogan describes Syrians and Turks as one family. He says he would like both groups to see him as a candidate who can bring business opportunities and better relations with the Middle East. He points out that his tourism and construction businesses have already invested in Turkey.

“We have projects that we have planned with Middle Eastern countries,” he says. “If the projects are implemented, then it will provide great investment and profit for Middle Eastern tourism.”

Echoing the words of the Turkish president, Muhammed Erdogan stresses that he’s a practicing Muslim but not an Islamist. Though unlike the president, this Erdogan says he believes in women’s rights, democracy and Turkey’s secular constitution.

Despite Muhammed Erdogan’s attempts to appeal to Turkish nationalism and pride, he has faced discrimination and even ridicule, particularly over his Turkish language skills, which are still a work in progress. The criticism has added to the native Arabic speakers’ insecurity about his Turkish fluency. So much so that he requested his Turkish assistant edit his interview answers and then read the edited answers aloud.

'All of Turkey is talking about this guy'

In the week before the election, campaigning on Turkey’s streets has been loud with music blaring from trucks and public squares. Bursa is an AKP stronghold but the opposition is visible as well, with booths and wall-sized posters of candidates. Recent polls suggest that the incumbent President Erdogan may not get the majority of votes he needs to win outright, which would trigger a runoff on July 8.

Samet Bostan, a 34-year-old vendor, is a staunch believer in President Erdogan and the AKP. He also plans to vote for Muhammed Erdogan because he follows the president’s party line. “God willing, people will support him. He is a brother of ours as well,” Bostan says.

But Havva Kurtulus, a 45-year-old mother, has no plans to vote for Muhammed Erdogan. “I have been an AKP voter for 15 years now,” she says. “As far as I know, shouldn’t a member of parliament be a person who is born in this land and someone who knows everything about this country?”

Technically, parliamentary candidates just have to be Turkish citizens and endorsed by one of the parties. But the arrival of large numbers of Syrians has sparked backlash.

Hidayet Sevinc is a member of the newly formed Iyi Party, which advocates that Syrians go back to Syria. “We are the only party who voices this loudly and clearly,” Sevinc says from his campaign booth in Bursa. “The Syrians will be happier in their own country. All of Turkey is talking about this guy [Muhammad Erdogan]. He doesn’t even speak proper Turkish.”

Muhammed Erdogan says some Syrians will go back when their country is secure again, but others will stay because they no longer have anything left there. His goal, he says, is to serve Turkey and its diverse population.

Asked whether he has a chance of winning when so many Turks do not see him as a legitimate candidate because he’s also Syrian, Muhammed Erdogan sighs. “God willing, I will win this blessed cause.”

Yasmin Bali contributed to this report.