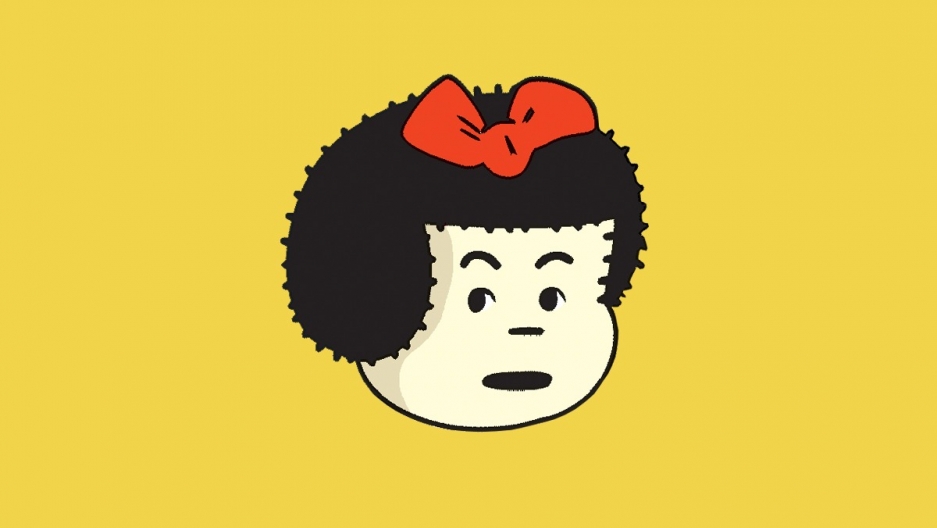 “Nancy” as drawn by Olivia Jaimes

The spunky, spikey-haired little girl Nancy debuted on newspaper comics page in 1933. But in her 85 year history, she has only been drawn by men — until now.

A “Nancy” comic by Olivia Jaimes.

In April, Olivia Jaimes debuted as the first woman cartoonist to draw “Nancy.” And in rebooting the comic strip, she’s introducing a distinctly 21st century sensibility, filled with jokes about social media.

“I love this strip so much that I want to bring it to a new generation,” says Jaimes. “And I want to translate it into terms they can understand.”

A “Nancy” comic by Olivia Jaimes.

Although “Nancy” has never been the most universally beloved strip in the funny pages, this reboot comes in the middle of a critical re-evaluation of the cartoon. More and more, comics connoisseurs are recognizing the character’s creator, Ernie Bushmiller, as a minimalist genius.

The peak of the “Nancy” renaissance is “How to Read Nancy: The Elements of Comics in Three Easy Panels” by cartoonists and teachers Paul Karasik and Mark Newgarden. Published last fall, the book is an extended analysis of a single “Nancy” comic drawn by Bushmiller in 1959. “Showing examples of ‘Nancy’ really illustrates the essence of the language of comic strips,” argues Karasik.

Deconstructing a 1959 comic strip by Ernie Bushmiller in “How to Read Nancy” by Paul Karasik and Mark Newgarden.

While Jaimes wants to stay true to the spirit of Bushmiller’s classic “Nancy” comics, she’s also bringing a feminist perspective that is generating resistance among internet commenters. But she gets some cheerleading from Cathy Guisewite, who faced similar criticism when she launched her own female-centric comic strip “Cathy” in 1976. “She should buy lots of ice cream, that’s my advice,” Guisewite suggests. (Guisewite’s debut collection of essays, “Fifty Things That Aren’t My Fault,” will be published in 2019.)