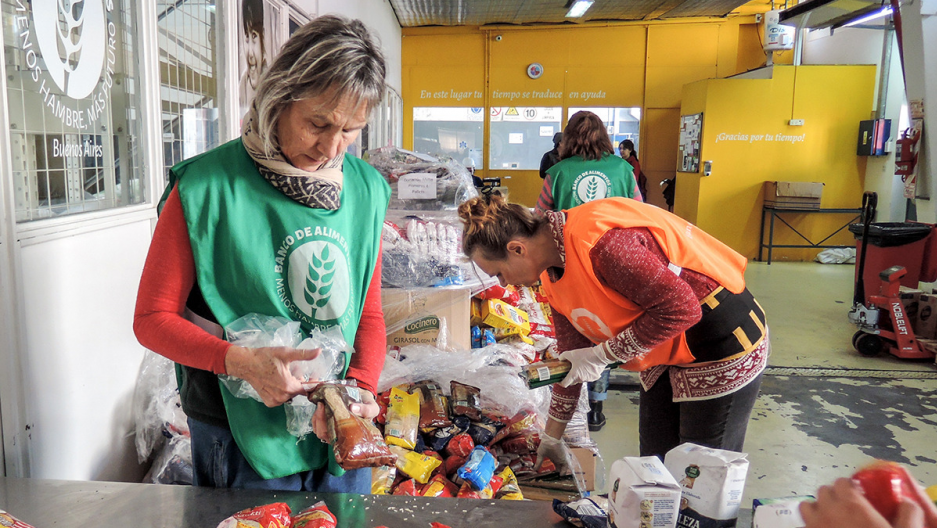 Renata Levy, in foreground, sorts food at Banco de Alimentos, a food bank where she works as a volunteer in the Buenos Aires province. “If it weren’t for the food bank, all of this food would be thrown out, and nobody would eat it,” she says.

Lunchtime is approaching, and the aroma of chicken stew wafts in front of the home of the country’s national congress.

Here, steps away from some of Argentina’s most powerful people, Paola Sarabia lifts the lid of one of the two dented pots that she’s placed on the sidewalk. A line of hungry people forms behind her. Sarabia is a cook at a soup kitchen run by Barrios de Pie, an organization that’s struggling to satisfy the city’s growing hunger.

“We brought the community kitchen to the street to show the situation we are living in,” Sarabia says.

A year ago, she says, about 40 children regularly came to the soup kitchen where she works in La Matanza, a municipality in the province of Buenos Aires. Now there are more than 200 children.

Sarabia’s stunt — serving a humble chicken stew in a way that would force lawmakers to see needy people lining the façade of the congressional building — is meant to urge those lawmakers to approve a food-emergency bill. The bill, first introduced in June, would add an extra 10 billion Argentine pesos (about $568 million) for the next two years to the fund that supports soup kitchens and addresses food policy issues. 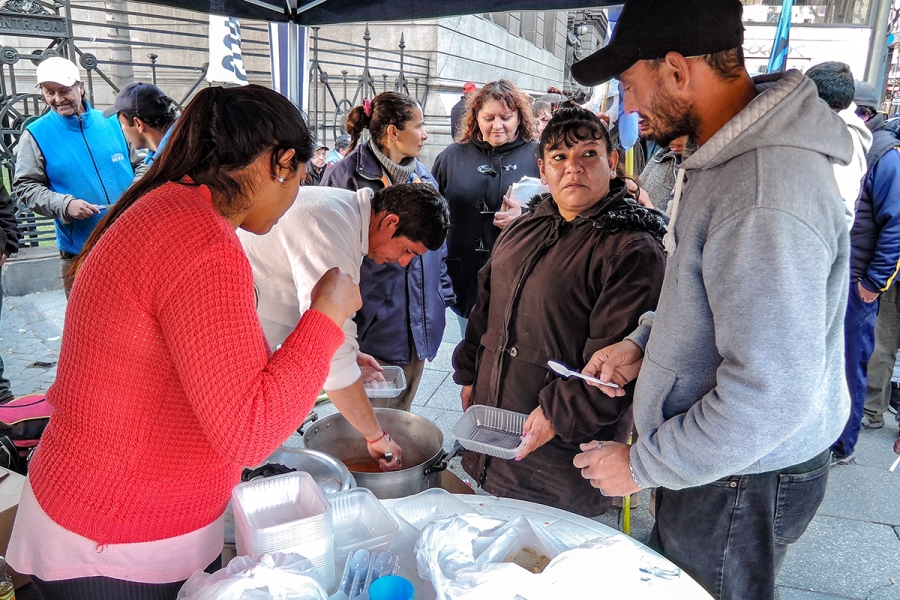 Paola Sarabia, in brown coat, offers warm stew to people lined up in front of Argentina’s congressional building. Sarabia hopes lawmakers will see how many Argentines rely on food banks.

Food insecurity isn’t anything new in Argentina. The country declared a food emergency in 2002, and it’s been continually extended since then. But people aren’t hungry because there’s not enough food. The problem is that the country poorly manages the food it has. On average, the nation loses or wastes about a kilogram (2.2 pounds) of food per person per day, says Mercedes Nimo, undersecretary of food and beverages for the Ministerio de Agroindustria.

Argentines often can’t get the food they need, says Francisco Yofre, an official with the United Nations’ Food and Agriculture Organization (FAO) office in Argentina.

“It’s often thought that it’s due to a lack of food production, but one-third of the food produced is lost annually,” he says, referring to global data.

Six percent of those food losses occur in Latin America and the Caribbean, according to FAO data.

On paper, Argentina is doing better than other countries at curbing food loss. The country loses or wastes more than 16 million tons of food annually, or 12.5 percent of all national production, according to the Ministerio de Agroindustria.

Moreover, Argentina’s food situation is improving, according to an FAO report published in September. The prevalence of undernourishment in Argentina, as well as in much of South America, has declined during the past decade, the report states.

By some measures, there’s even an excess of food. Each year, households in the city of Buenos Aires throw away an average of 8.4 kilograms (17.5 pounds) of food and some 2.9 kilograms (6.4 pounds) per resident. In 2016, this waste amounted to about 9,500 tons of discarded food.

But the country continues to live in a state of chronic economic crisis. The inflation rate is consistently among the highest in the world; the rate hit 40 percent in 2016. While restaurants, supermarkets and even some households have more food than they can use and wind up tossing portions of it into trash bins, those who work with Argentina’s most vulnerable people say there’s a growing sense of desperation.

“Our salary is 4,000 pesos ($227) per month, and it is not enough for us to eat,” says Sarabia, the woman who served chicken stew in front of the government building, referring to her family’s income.

She says she regularly eats at soup kitchens with her children. 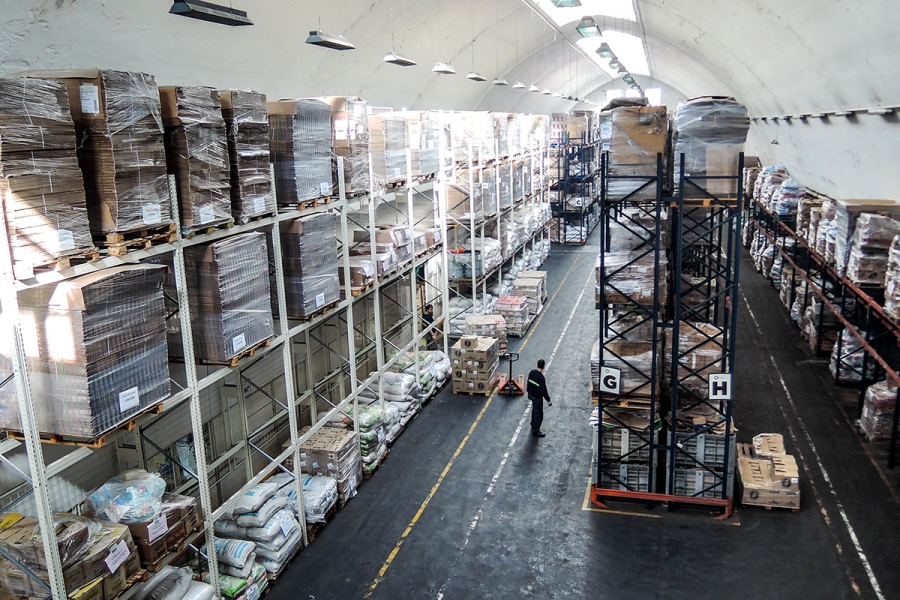 Food donations are accepted and stored at the Banco de Alimentos, a food bank, in San Martín in Buenos Aires province.

In 2015, 12.3 percent of households had to reduce their share of food involuntarily, according to a report by the Pontificia Universidad Católica Argentina. Between May 2016 and May of this year, the price of food in the Buenos Aires area increased by 27 percent, according to the Instituto Nacional de Estadísticas y Censos.

“Nowadays, people have returned to scavenging garbage for food,” says Federico Augusto Masso, a member of the national congress’s lower house and a supporter of the food-emergency bill.

There are efforts to funnel more of that wasted food to the people who need it.

“We receive donations of food that will not be marketed because the expiration date is close, or there’s some mistake on the packaging or it belongs to a discontinued promotion, among other reasons, but they are perfectly fit for consumption,” says Virginia Ronco, who leads the institutional communications of Banco de Alimentos.

The organizations that receive the food contribute 5 pesos (about 28 cents) per kilogram, Ronco says.

“Many can eat with the waste that is generated both in the county and in the world,” Ronco says. “Not only can people eat, save on resources and not generate organic waste – it’s super necessary to recapture this food.”

It’s not just soup kitchens that rely on Banco de Alimentos. Peumayén Foundation, a home and day center for people with mental disabilities, has received food from the bank for seven years.

“If we really had to pay for food expenses with institutional income, it would be complicated,” says María Cecilia Fontenla, the center’s director.

In 2015, the Ministerio de Agroindustria created a program focused on reducing food waste that carries out trainings for residents, local governments and food producers to learn how to reduce food waste.

The country has the food it needs, Nimo says. People just need to be able to get to it.

“It’s not linear or direct, but if you make the most efficient value chains, you can produce more, so prices should go down,” she says. “Coupled with additional public awareness so that people can donate more, you get greater access to food.”