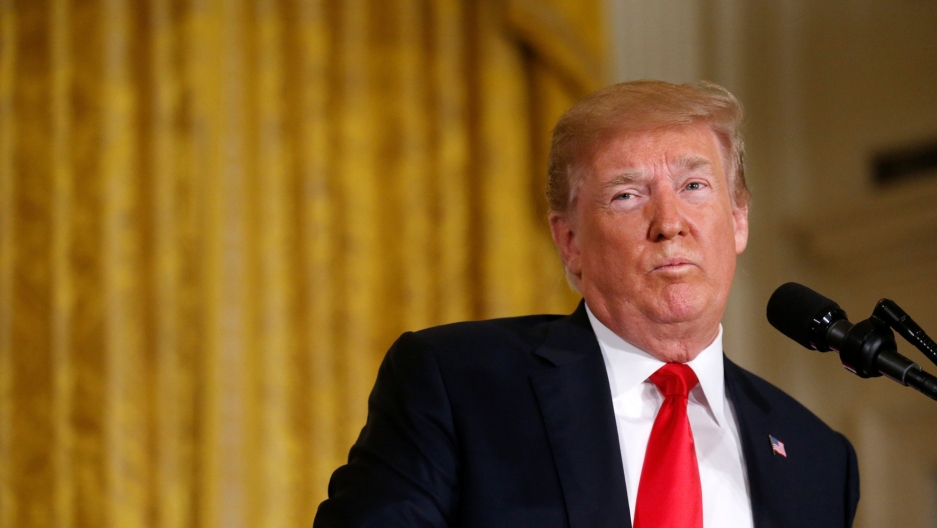 US President Donald Trump addresses a meeting of the National Space Council in the East Room of the White House in Washington, June 18, 2018.

US President Donald Trump has threatened to impose a 10 percent tariff on $200 billion of Chinese goods. The move is just the latest as Washington fights trade battles on several fronts. Beijing warned it would retaliate, in a rapid escalation of the trade conflict.

It was retaliation, Trump said, for China's decision to raise tariffs on $50 billion in US goods, which came after Trump announced similar tariffs on Chinese goods on Friday.

"After the legal process is complete, these tariffs will go into effect if China refuses to change its practices, and also if it insists on going forward with the new tariffs that it has recently announced," Trump said in a statement on Monday.

The comments sent global stock markets skidding and weakened both the dollar and the Chinese yuan on Tuesday. Shanghai stocks plunged to two-year lows.

China's commerce ministry said Beijing will fight back with "qualitative" and "quantitative" measures if the United States publishes an additional list of tariffs on Chinese goods.

"Such a practice of extreme pressure and blackmailing deviates from the consensus reached by both sides on multiple occasions," the ministry said in a statement.

"The United States has initiated a trade war and violated market regulations, and is harming the interests of not just the people of China and the US, but of the world."

US business groups said members were bracing for a backlash from the Chinese government that would affect all American firms in China, not just in sectors facing tariffs.

Jacob Parker, vice president of China operations at the US-China Business Council in Beijing, said China would undoubtedly “begin looking at other ways to enforce action against US companies that are operating in the market."

Some companies have reported Beijing is meeting with Chinese businesses to discuss shifting contracts for US goods and services to suppliers from Europe or Japan, or to local Chinese firms, Parker said.

Washington and Beijing appeared increasingly headed toward open trade conflict after several rounds of talks failed to resolve US complaints over Chinese industrial policies, lack of market access in China and a $375 billion US trade deficit.

US Trade Representative Robert Lighthizer said his office was preparing the proposed tariffs and they would undergo a similar legal process as previous ones, which were subject to a public comment period, a public hearing and some revisions. He did not say when the new target list would be unveiled.

On Friday, Trump said he was pushing ahead with a 25 percent tariff on $50 billion worth of Chinese products, prompting Beijing to respond in kind.

Some of those tariffs will be applied from July 6, while the White House is expected to announce restrictions on investments by Chinese companies in the United States by June 30.

"China apparently has no intention of changing its unfair practices related to the acquisition of American intellectual property and technology. Rather than altering those practices, it is now threatening United States companies, workers, and farmers who have done nothing wrong," Trump said.

Trump said if China increases its tariffs again in response to the latest US move, "we will meet that action by pursuing additional tariffs on another $200 billion of goods."

Trump said he has "an excellent relationship" with Chinese President Xi Jinping and they "will continue working together on many issues."

But, he said, "the United States will no longer be taken advantage of on trade by China and other countries in the world."

The intensifying trade row threatens to put more pressure on the already cooling Chinese economy, risking an end to a rare spell of synchronized global expansion and collateral damage for its export-reliant Asian neighbors.

China imported $129.89 billion of US goods last year, while the US purchased $505.47 billion of Chinese products, according to US data.

Derek Scissors, a China scholar at the American Enterprise Institute, a Washington think tank, said that means China will soon run out of imports of US goods on which to impose retaliatory tariffs.

China was unlikely change its industrial policies in response to the US trade threats, he said. That could take a long and painful trade fight.

"As I've said from the beginning, China will back off its industrial plans only when US trade measures are large and lasting enough to threaten the influx of foreign exchange. Not due to announcements," he said.

By Michael Martina and Eric Beech/Reuters