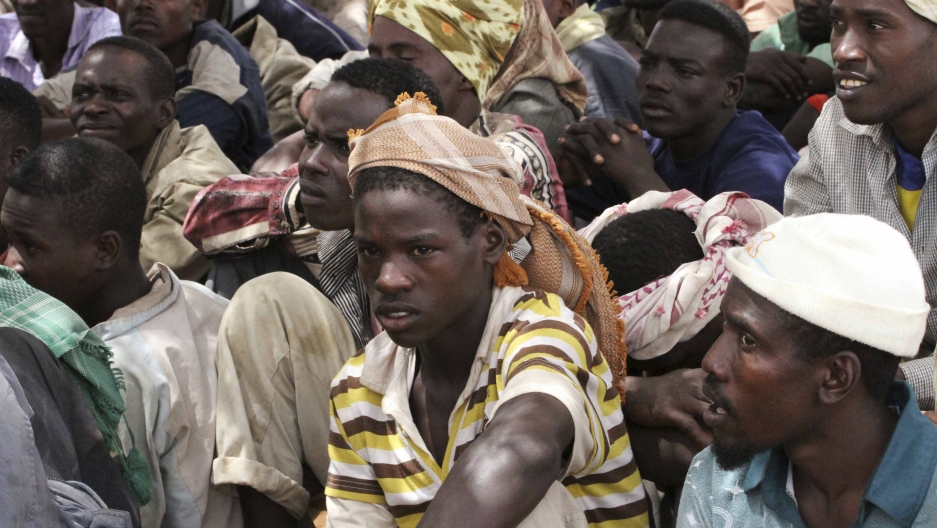 Members of the al-Qaeda-linked militant group al-Shabab surrender to authorities in the north of Somalia's capital, Mogadishu, Sept. 24, 2012.

You can hear the anguish in Maalim Mohamud’s voice when he talks about his son Ismael.

Ismael disappeared on his way home from school in the town of Baidoa in southern Somalia two years ago. He would be 13 years old today.

“I still feel the pain as a parent. I can’t believe that I will never see him again,” said Mohamud, 45, a father of five who now lives in the Somali capital of Mogadishu. “He was the hope of this family and we loved him. We miss him so much.”

Mohamud says he suspects that al-Shabab militants kidnapped Ismael with three other students from Baidoa primary school. The al-Qaeda-linked terror group regularly enters villages and demands that families give up their children. If parents resist, the militants often capture the children and force them to join their ranks.

“We suspect that they were kidnapped by al-Shabab soldiers because they have been ordering us to hand over our children as young as 7 years to help them fight,” he said.

Al-Shabab has conscripted children throughout its decade-long insurgency in Somalia, but it escalated its campaign of forcibly recruiting child soldiers in mid-2017, according to Human Rights Watch.

In January, Somali soldiers, with support from US forces, conducted a raid on an al-Shabab camp in the Middle Shabelle region in southern Somalia and freed at least 32 child soldiers.

After the raid, Somali Information Minister Abdirahman Omar Osman told Reuters that al-Shabab’s reliance on child soldiers proved Somali troops and their allies were making headway against the group.

“It is unfortunate that terrorists are recruiting children to their twisted ideology,” said Osman. “It showed how desperate the terrorists are, as they are losing the war and people are rejecting terror."

That assessment hasn’t comforted Somali parents in vulnerable communities. Some families are keeping their children out of schools. Others have left villages in remote areas and moved to major cities like Kismayo and Mogadishu.

Related: The death of a Navy SEAL reveals US mission creep in Somalia

Bashir Abdalla, 16, who now works as a waiter in Mogadishu, was forced to leave his home in the town of Berdale in southern Somalia when militants threatened to kill everyone in his family if he wasn't willing to train and defend his country as a jihadi.

Abdalla was in 10th grade at the time. He said friends who had escaped from an al-Shabab military training camp told him that children like him join fighting units in their mid-teens after three months of training.

“I was very scared for my life and I had to run to Mogadishu and look for a job,” said Abdalla who is now living with his aunt. “I had to drop out of school because I knew they will kill me and my family. I was very worried.”

Human Rights Watch said more children are likely to drop out of school and flee their rural homes if more isn't done to protect children.

“Al-Shabab’s ruthless recruitment campaign is taking rural children from their parents so they can serve this militant armed group,” said Laetitia Bader, senior Africa researcher at Human Rights Watch. “To escape that cruel fate, many children have fled school or their homes.”

In the south, elders — community leaders with significant authority — are deeply worried over the situation, saying the future of their communities is in jeopardy.

“We’ll have no male children in the region if the trend continues,” warned Ahmed Aden, 65, an elder from Bay who now lives in Mogadishu. “We are losing our sons every day because they are being killed by the hundreds. Our children are not going to school and their future is uncertain.”

Al-Shabab has been battling the UN-backed government in Somalia for years. The group has carried out a string of attacks in neighboring Kenya, including the Garissa University attack that left 148 students dead in April 2015. The group has been pushed out of most of the large cities it once controlled, like the port city of Kismayo, but it remains a potent threat.

This month, al-Shabab killed an American special operations soldier in an attack on Somali troops and US forces near Jamaame. In October last year, more than 300 people were killed in Mogadishu after twin car explosions, making it the deadliest attack in the country's recent history. Al-Shabab claimed responsibility for both attacks.

But as African Union Mission to Somalia is expected to withdraw its 22,000 troops by 2020, residents in the East African country are worried about the future.

“Foreign soldiers should not leave Somalia. They should in fact increase the number so that they can defeat al-Shaab," said Mohamud. "I cannot wish anyone to go through the anguish I have been through.”