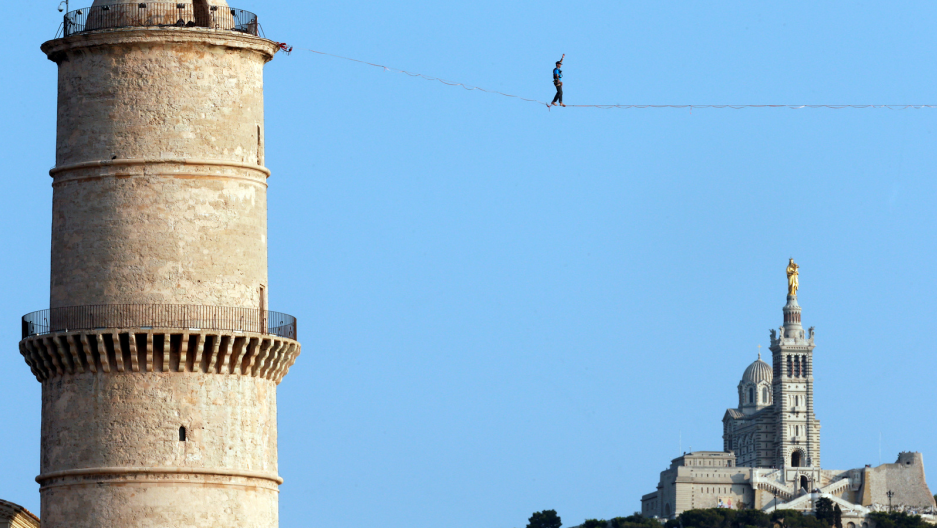 Intelligence often doesn’t have anything to do with rationality. There is a marked difference between the two, although we often conflate them. Here, a tightrope walker performs on a rope above the Old Harbour, with the Notre Dame de la Garde basilica in the background, during a sport event as part of Marseille's nomination as 2017 European Capital of Sport in Marseille, France, Sept. 8, 2017.

Talk show host Conan O’Brien stood before the Harvard University Class of 2000 —  a class filled with future Pulitzer Prize winners, football players and politicians — to deliver a rousing commencement speech. O’Brien, a Harvard alum himself, offered a stern warning: Don’t tell people you went to Harvard. They’ll expect a lot from you.

Hyperbole aside, Conan’s anecdotes offered an interesting —  although probably unintentional — lesson: Because these students went to Harvard, people will assume that they are not only intelligent but rational, too. And that assumption is wrong because, while there is correlation between intelligence and rationality, it’s not a very strong one.

What’s the difference between rationality and intelligence?

It’s a little more complicated than book smarts vs. street smarts. Keith Stanovich, a professor emeritus of applied psychology and human development at the University of Toronto, writes that we draw from different cognitive abilities when it comes to intelligence and rationality.

Intelligence can mean different things to different people. Though if we look at what Intelligence Quotient (IQ) tests measure, intelligence is the ability to learn new things and retain knowledge.

But what’s important here is what IQ tests miss. And, according to York University professor Maggie Toplak, IQ tests don’t effectively measure how rational a person is. In the book The Rationality Quotient: Toward A Test of Rational Thinking which she, Stanovich and researcher Richard West co-wrote, rationality is defined in two ways: Behaving in a way that helps you move toward and accomplish your goals, and how well our beliefs map onto the actual structure of the world (conspiracy theorists wouldn’t fit in this definition).

The most easily retrieved response is a good thing when doing things like quickly choosing a shampoo in the supermarket. However, Boston University marketing professor Carey Morewedge, says not fully assessing certain situations can be life-changing.

The good news is we can get better at being rational. All it takes is a little practice. But it’s much harder than you think, since we’re surrounded by people and things that confirm our biases. That’s why, Morewedge says, we’re really bad at picking job candidates.

His solution? Leave the rationality to the numbers.

“We find that algorithms tend to do better in these difficult predictions,” Morewedge says. “Should I hire someone? Who’s going to succeed in graduate school? Which prisoner should be paroled? In these kinds of cases, there’s a lot of information and people are inconsistent in the way that they weigh different pieces of information.”