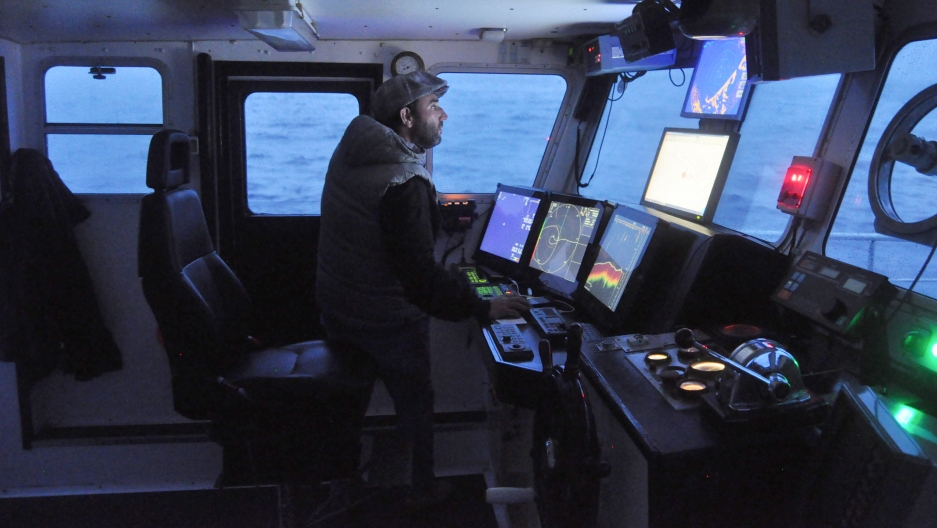 Luís Santana, captain of the Afrodite, is a third-generation fisherman from Peniche, Portugal. Sardine stocks have decreased greatly over the past few decades. “If I could find someone to sell the Afrodite to, I would,” he says.

Luís Santana is the owner and captain of one of the nicest, newest and most high-tech ships in Portugal’s sardine fleet, the 88-foot-long Afrodite, which is made out of fiberglass and kitted out with state-of-the-art sonars and an impressive array of cranes and other heavy equipment. But Santana is now giving serious consideration to something that just a few years ago would have been all but unthinkable — selling the ship and getting out of the sardine business altogether.

The sardine has long been such an important part of the Portuguese diet that the humble little fish has become something of a national symbol, emblazoned on souvenir T-shirts, coffee mugs and tote bags. But real, live sardines are increasingly scarce. Their stocks in the waters off the Iberian Peninsula have plummeted in recent years, resulting in a fishing ban earlier this year that grounded Portuguese and Spanish sardine ships, like the Afrodite, for months. 2018 was the fourth consecutive year of restrictions on sardine fishing. 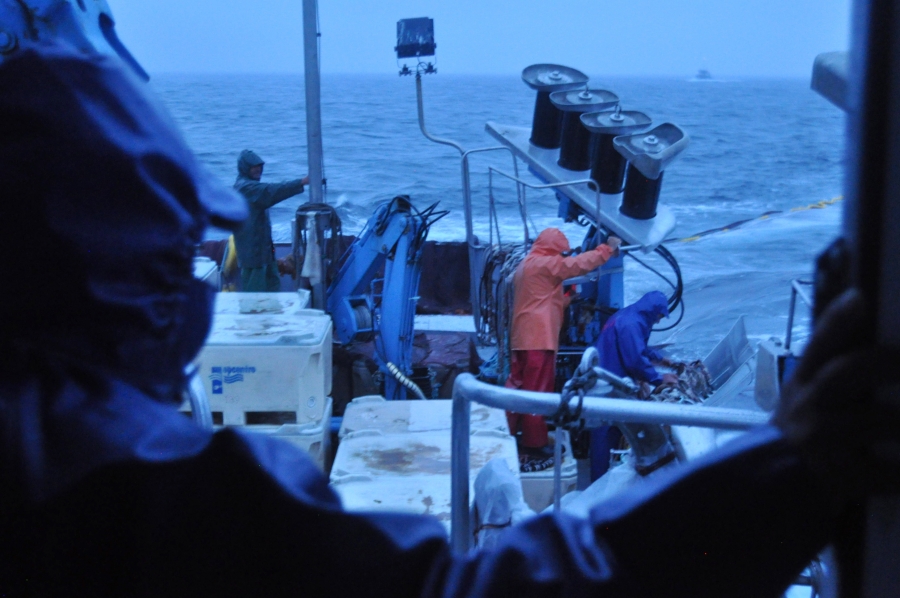 Fishermen in Peniche, Portugal, get ready to cast nets in search of sardines.

“I can’t go on like this much longer,” said Santana, a 47-year-old whose father and grandfather were also fishermen in Peniche, one of Portugal’s main sardine ports. “If I could find someone to sell the Afrodite to, I would.”

Iberian sardine stocks have been slipping, slowly but steadily, since the 1970s, Portuguese government data shows, hitting worrisomely low levels in recent years. Sardine stocks in Portuguese waters fell from an estimated 106,000 tons in 2006 to just 22,000 tons in 2016. That’s under half the threshold that researchers consider the minimum necessary to maintain the health of the species — and it’s been that way since 2009, without any of the periodic spikes that are generally seen in sardine populations every five or so years. 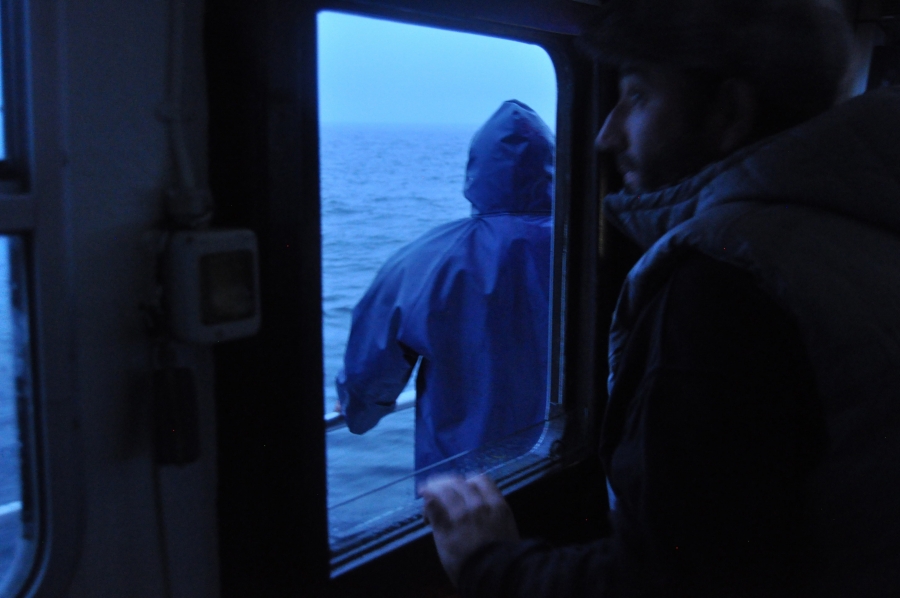 Luís Santana, captain of the Afrodite, gazes out over the Atlantic Ocean. "It's getting harder and harder [to catch sardines] every year," he says.

In light of the decline, the International Council for the Exploration of the Sea, or ICES, an international platform made up of 20 member countries, recommended a complete ban on fishing of the species for 15 years, in order to give successive generations of juveniles — the most threatened demographic among Iberia’s sardine population — time to develop and reproduce.

But Spain and Portugal balked at the proposal, instead agreeing, under the auspices of the European Commission, to push the regular January start of this year’s sardine season back by several months. Spanish trawlers were permitted to go out only in late April, and Portugal’s Ministry of the Sea extended the ban several more weeks, lifting it only on May 21. This year’s total Portuguese and Spanish sardine catch is capped at 14,600 tons. 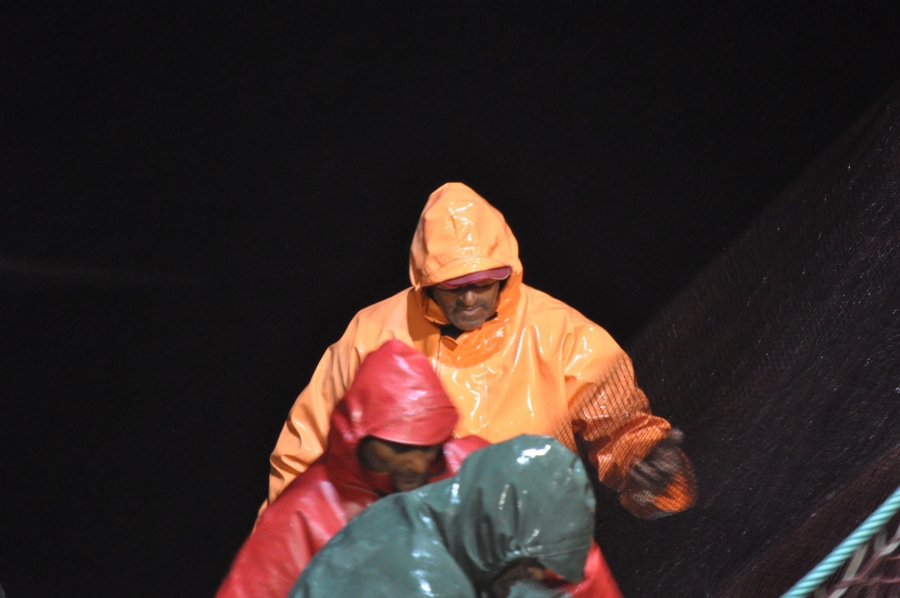 Fishermen aboard the Afrodite make sure the nets are untangled.

The reason behind the implacable decline in Iberian sardine stocks is not clear. Experts say a combination of factors are at play, including predation, overfishing and changes in water temperature and global ocean circulation cycles — both of which are potentially at least partially linked to global warming.

“We don’t know exactly why this is happening, but the pattern of decline is very clear,” said Gonçalo Carvalho, a coordinator at PONG-Pesca, an umbrella group that represents non-profits working to preserve Portugal’s marine resources. “We don’t know if sardine stock will recover, even if we were to close the fishery. There’s a real risk it’s gone beyond the threshold it can recover from.”

“Unfortunately, and I hope I’m wrong, but I can see a scenario in which in a few years we can see several fish stocks (including sardines) disappearing from Portugal,” said Carvalho, a fierce proponent of working with the fishermen themselves to try to rebuild stocks.

Associations representing Portuguese fisheries have come out against the restrictions, casting doubt on the underlying research. At a recent meeting in Lisbon of Portuguese fishery stakeholders, head of the ANOPCERCO association that represents small-scale fisheries questioned the science, saying the official numbers just don’t jive with their experience.

The fishermen “are collecting empirical data every day, in the ocean, and they know when stocks are rising or falling. Perhaps it’s not the most scientific of methods, but it’s time-honored,” Humberto Jorge said, adding that over the past couple of years “they’ve been clearly seeing that there are more and more sardines.” 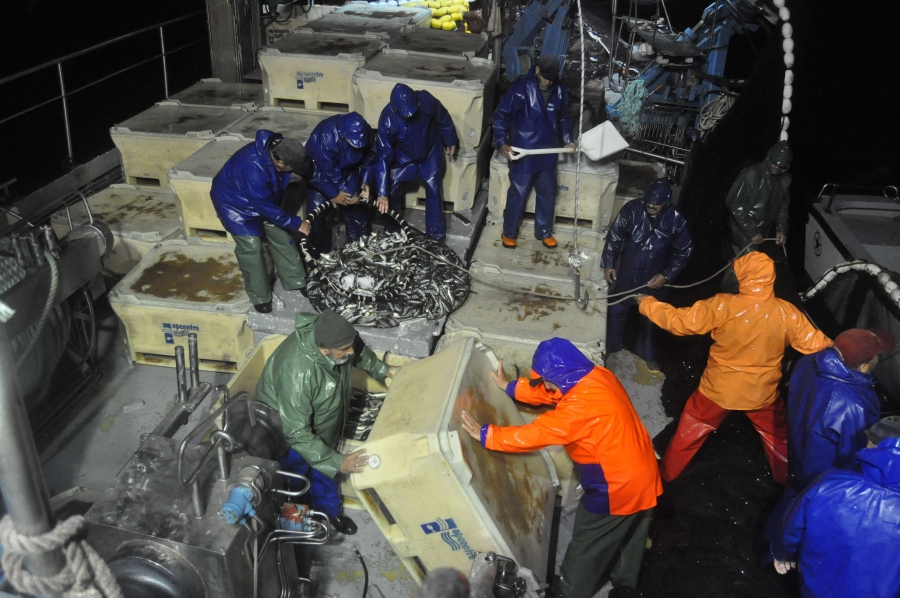 Fishermen scramble to prepare insulated boxes for freshly caught sardines. On most sardine boats, if there aren't any fish at the end of the day, nobody gets paid.

Officials from the Portuguese Institute for Sea and Atmosphere declined to speak on the record, but Santana, the Afrodite's captain, recognized that sardines are no longer as plentiful as they once were.

“We used to get enough fish to fill 100 boxes,” he said on a recent June night, when his crew of 15 braved unseasonable rains and choppy seas to net a haul that filled just seven industrial-sized Styrofoam boxes.

But Santana objects to the way that conservation policies have been applied, saying that caps on fishermen’s daily catch end up promoting waste. “If I put out my net and I get a haul of 7,000 kilograms, and I’m only allowed to catch 3,700 kilograms, I’m forced to dump all those dead sardines back into the sea.” 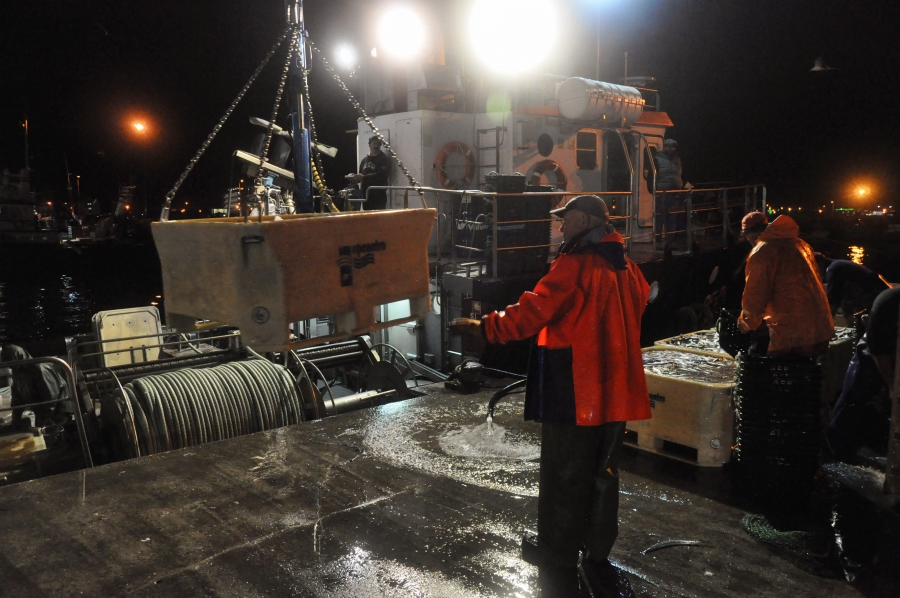 Fishermen wait for a crane to unload a crate of sardines onto the dock in Peniche, Portugal. On this June night, the crew aboard the Afrodite managed to get seven crates of sardines.  According to captain Luís Santana, “we used to get enough fish to fill 100 boxes."

Like the other around 1,500 Portuguese fishermen affected by the ban, Santana received a one-time government payout of 900 euros ($1,060) for the nearly five months this year that the Afrodite remained grounded. While some other crews pivoted to other species, such as horse mackerel or anchovy, Santana says those fish tend to fetch such low prices that it doesn’t make sense to even take the Afrodite out during the sardine bans.

For many revelers at the street parties this week marking Lisbon’s patron saint, Santo António, sardines are nothing less than an obligatory part of the festivities.

“I’m sorry about the sardines,” said writer Hugo Gonçalves as he expertly pulled meat off the bone of a freshly grilled sardine, “but Santo António wouldn’t be complete without at least one." 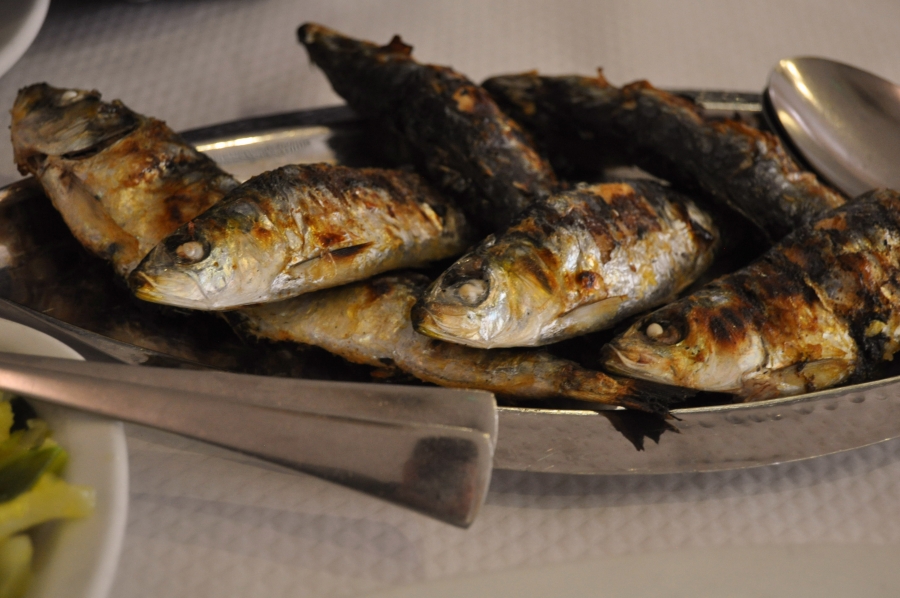 Grilled sardines are a cultural symbol of Portugal.