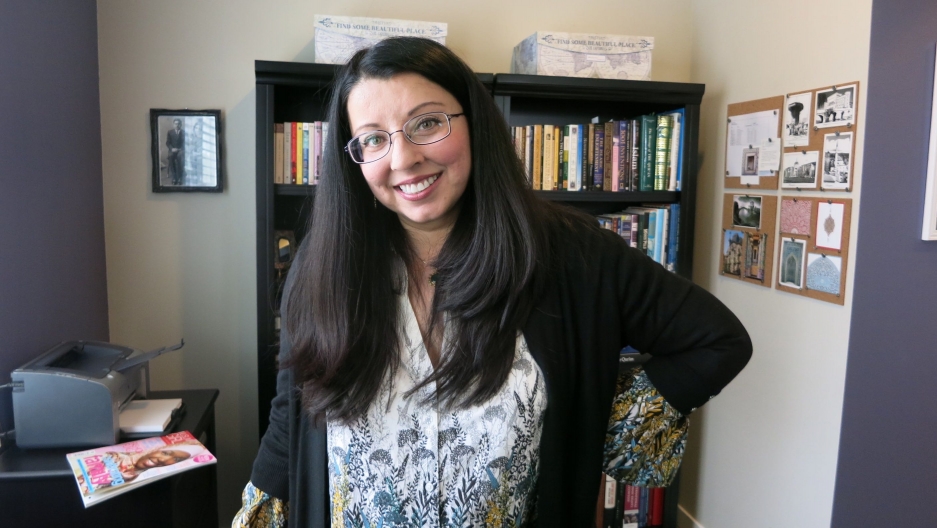 There's the leather-bound set of Sir Arthur Conan Doyle titles that her father, himself more inclined to poetry, gave her when she was a teenager. Harry Potter and Terry Brooks epics. Studies of the Quran and human rights reports. And copies of her own books: well-regarded mysteries featuring a Canadian detective who is Muslim and his hockey-playing woman partner, as well as the first part of a fantasy series steeped in Islamic culture.

Khan, the British-born child of Pakistani immigrants, was raised in Canada and is a newly minted US citizen. She explores themes of identity and exclusion, bringing imagination and perspective to the current — and sometimes contentious — global conversation about faith and diversity.

“There’s a thread of continuity in all the work that I’ve done, which is to claim a space for marginalized voices and allow them to speak for themselves,” Khan says.

That work began not as a writer, but as a legal scholar and lawyer. Khan, 49, published her first book just four years ago. Her impressive output since then, which includes a short story featuring her detectives and a nonfiction children’s book about Ramadan, might attest to pent-up creative energy she's had since she was a teenager. Early on, she tried her hand at poetry and then a Terry Brooks-style fantasy, and in college, she published a few short stories.

Khan grew up hearing Urdu poets reciting at her home in salons hosted by her parents, who encouraged her writing as a hobby. But her homemaker mother and psychiatrist father wanted her to be a doctor. Immigrants of their generation were “very concerned with financial security,” Khan says, adding with fond amusement that she found that “a little bit ironic because they all come from a culture that venerates literature.”

Khan wasn’t interested in the sciences. Her parents suggested she study law, pointing out that she had always been interested in human rights. It was a spark, like her love of literature, they also had lit. Her parents, both originally from a village near the culturally rich Indian city of Lucknow, were reticent about their experiences during the violence that accompanied the partitioning of British India into independent India and Pakistan. But “they were always concerned about other people in peril,” Khan says.

She has a vivid memory of accompanying her parents to a lecture about oppression under El Salvador’s military dictatorships when she was 9 years old.

“Ever since then, I’ve been thinking about why do these terrible things happen to people, and how do we stop it,” she says.

While living in Chicago, she helped a Toronto publisher start a magazine aimed at Muslim teen girls in North America. In Muslim Girl, articles on politics in places like Afghanistan appeared alongside features meant to bolster the confidence of teens who were different from their peers in the West. While the magazine garnered media attention, it struggled financially and folded in 2008.

That was about the time when, following a stint at the University of California, Los Angeles, Hashemi was offered a job as director of the University of Denver’s Center for Middle East Studies. As the couple prepared to move, Khan considered whether she would seek a teaching position or take the Colorado bar exam. Hashemi proposed another option, urging Khan to try writing fiction full time.

For a writer, no experience is wasted. In Khan’s first mystery, "The Unquiet Dead," detectives Rachel Getty and Esa Khattak investigate a mysterious death in Toronto and tie it to the massacre of thousands of Bosnian Muslims in Srebrenica in 1995.

“A crime is about our darkest human impulses,” Khan says. “That’s what human rights abuses speak to. I saw a connection there.”

Margaret Cannon, a crime fiction specialist and longtime book critic for Canada’s Globe and Mail, said crime and mystery writers have long been concerned with social issues. Cannon says Khan manages to strike a balance, not letting the message overwhelm the story. She adds that Khan is “positioning herself with the way the genre’s going, not where it’s been. She’s global. She’s got strong women [characters], which is essential.”

Khan presents a range of nuanced characters, Muslim and non-Muslim, to readers she fears encounter only stereotypes about Muslims on the nightly news. Khan, who often speaks to community groups about her fiction as well as about current events, has been told by more than one audience member that she is the first Muslim they have met.

Khan has heard Westerners depict Muslim women as oppressed and Islamic extremists say they have no place in schools or outside the home at all. "I always think of my work as a speaking back," she says. "I've seen a lot of strong women in my life. This community of sisters who express so much solidarity with one another and look out for one another."

The heroism doesn't have to be epic. One of her earliest memories is of reaching school in England and discovering she had forgotten her milk money, exasperating a stern teacher. Then Khan's sister arrived. "There was my sister like a guardian angel, rushing in, [saying], 'Here's the money!'"

Khan’s "The Unquiet Dead" was followed in 2016 by "The Language of Secrets," a mystery concerned with poetry, loss and a real-life 2006 terror plot on Toronto that was foiled by Canadian authorities. In 2017, Khan takes readers and her recurring characters, Khattak and Getty, to Iran, her husband’s homeland, in "Among the Ruins." The next stop, in 2018’s "A Dangerous Crossing," is a Greek island struggling to accommodate Syrian war refugees.

While characters Khattak and Getty are globe-trotters, their home is Toronto.

“Canada was so familiar to me,” Khan says. “It was home. I wanted to write about a city I know very well and how it could produce someone like Esa.”

She says Los Angeles and Chicago, where she has lived in the United States, also are among “these big, multiethnic cities where you have to engage with your neighbor every day, and there’s joy in it.” But she also has seen another side of the United States.

In a 2016 Globe and Mail essay, Khan wrote of receiving phone calls and messages following Donald Trump’s presidential election victory after a campaign in which he pledged to ban Muslims from the United States and denigrated immigrants. Khan heard from “anxious Muslim parents of anxious Muslim children, some my own nephews and nieces, asking the question: ‘What do we do now?’ And all over social media and in real life, our community organizers and activists were reflecting on next steps: How do we tell our children not to be afraid when we ourselves are so afraid, so discouraged, so disheartened?”

A year into the Trump presidency, a less anguished Khan remained determined to find answers in engagement.

She and her husband applied for US citizenship just after the election. They are grateful for the professional opportunities they had found in the United States and consider themselves at home in the country, proud of having visited dozens of states. But at the ceremony where she took the citizenship oath, Khan says she recognized she had privileges many others in the room lacked.

“I speak English as a first language. I’m a lawyer; I could do my whole application myself. And I’m from Canada,” she says.

The challenge for her and her fellow citizens, she says, is to determine “are we a country of many communities where everybody has equal rights? Or are we a country where some people are on top and everybody else has to live in fear?”

Fear shadows Khan’s 2017 fantasy book, "The Bloodprint." She imagines a society that, but for the knights and magic, could be Afghanistan or Pakistan under the Taliban. The book addresses the questions that inform Khan’s mysteries: How can multicultural ideals be realized? How can ignorance and intolerance be conquered?

Khan said the Islamic world produced the Taliban, but also Malala Yousafzai, who was the age of Muslim Girl readers when she was shot because she insisted that she and other Pakistani girls had the right to an education. Khan argues that neither Western prejudices nor Islamic fundamentalism should define Islam and that women must have a say.

“I wanted to take it [Islam] back out of their hands and put it in ours,” Khan says.

The fantasy genre, which has long been male-dominated, is a departure for her — and she sees plenty of opportunity for women. Khan has seen in fantasy "a lot of women saying, 'We don't like the roles we've been subjected to.'" She adds that she also depicts men capable of having adult, respectful relationships with women, a hallmark of her work in crime fiction as well as in fantasy.

Saladin Ahmed, an American writer whose 2012 book, "Throne of the Crescent Moon," similarly weaves tales from the Islamic tradition with fantasy, said Khan not only avoids stereotyping Muslims as dangerous outsiders but the trap of depicting them as boringly noble.

“Ausma’s books contain humor,” he said. “There are these funny moments with her characters because they are human beings.”

Whether the trappings are mystery or fantasy, Khan said she strives for authenticity. “I’m simply describing the world that we live in and the way that we live."