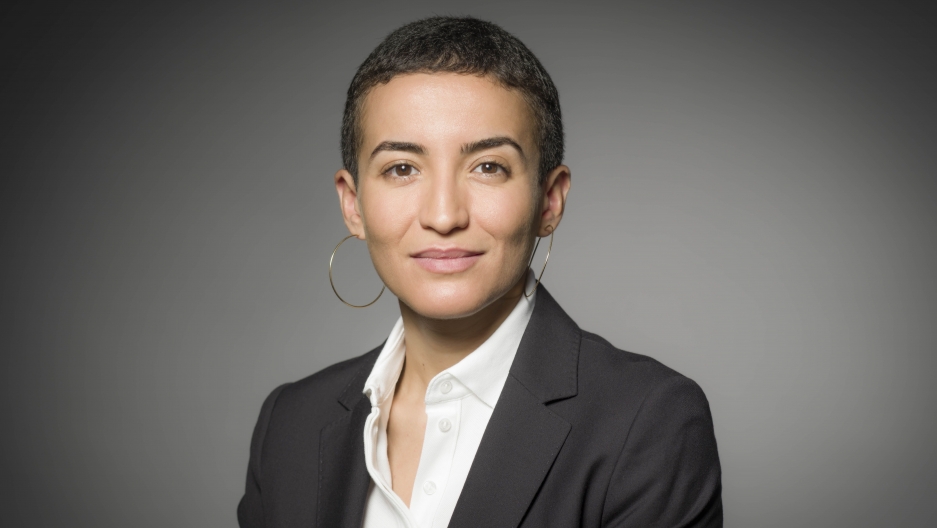 Seven years ago, Mariame Tighanimine, a 23-year-old French woman, was running a saucy, feminist webzine for Muslim women with her sister Khadija Tighanimine, called Hijab and the City. That was also the summer the French parliament voted to ban full-length veils in public.

Mariame Tighanimine and her older sister were born and raised in France, daughters of Moroccan immigrants. Both wore veils at the time and were tired of being discriminated against for jobs, so they decided to create their own employment. They were on to something; their site answered a real need in France, and the sisters had a successful, four-year run with Hijab and the City, which encouraged empowerment of Muslim women and women in general.

Just this past fall, Mariame Tighanimine, the youngest of six siblings, published a memoir at age 30 called, "Différente comme tout le monde" ("Different, like everyone else"). Her face stares out from the cover, bareheaded with cropped hair, gold hoops in her ears. Plenty has happened to Tighanimine in recent years, but she is absolutely recognizable — from the feisty head of a startup webzine in the Paris suburbs — to a thoughtful young entrepreneur who graduated from the prestigious Sciences Po university and now lectures there.

Her book project began when a publisher read a Facebook post she published during the summer of 2016 when a burkini ban on public beaches (since suspended) was making headlines. In it, she described how often she was discriminated against and even assaulted when she wore a headscarf. Tighanimine no longer wears a headscarf, but the road to taking it off was long and complicated.

In her book, tinged with humor but with serious undertones, Tighanimine addresses casual and outright racism in France, outlining in her trademark frankness her own coming-of-age and her refusal to take action in the name of a community or a group, always preferring to adopt a universal approach. Tighanimine’s book is important because her experience is representative of a first-generation, French citizen from an immigrant background, with the painful struggle that comes with it. She takes no prisoners, whether it’s calling out other Arabs who refer to her as “sister” or journalists who want her to conform to a cliché for their articles. She's particularly critical of her teachers in state schools, who, from an early age, made her feel different.

Tighanimine devotes half of the book to her experience in school, where she systematically experiences discrimination. Her parents, although illiterate, made sure their children paid attention at school and drilled into her that her teachers were like a “second mother.”

“My parents told me I had to respect school and the teachers, and I thought it was a sanctuary, in which I was safe,” Tighanimine recalled in a recent interview. Yet it was at school that she learned she was a bougnoule — an offensive term for an Arab or North African and, moreover, from a working-class background.

When Tighanimine began wearing a headscarf, because the other women in her family did, at school she was made to take it off (to confirm with the law) and instead wore a bandana. Accused of being an extremist by one teacher who saw her veiled, outside of school, and told by another that she didn’t deserve to graduate, she writes that because she was stubborn and came from a loving family, she pulled through. But many others weren’t as strong, she says, and she finds their treatment unforgivable.

At a public university, she meets Marxists, socialists, anarchists and others who tell her she can’t be an activist and open-minded while wearing a symbol of submission. It’s the beginning of a stretch of time that one might call a sociological experiment, with Tighanimine at the center of it, as a veiled Franco-Arab woman from working-class Parisian suburbs, who refuses to be categorized in any way. In 2011, Tighanimine decided to apply to the private and extremely competitive Sciences Po, and to her surprise, she aced the entrance exams.

She writes, “My years at university had an enormous impact on my short life. I was lucky enough to experience two forms of teaching that were completely different ... but sometimes I wonder if I hadn’t wasted time because of all the issues about my veil. But I remember that university wasn’t any less kind or easier for my acquaintances who weren’t veiled but were from an equally working-class and nonwhite background as mine.”

Tighanimine devotes a chapter to explaining why she took off her headscarf. “I didn’t think that taking off my headscarf would be so complicated,” she says in the book.

She didn’t wear a headscarf for religious reasons, but more to express an identity — to be supportive of the underdog. It took her five years of what she called “transitioning” to wearing a variety of hats and turbans to when she was finally ready to take it off. Her family and friends reacted very differently to her “unveiling” — from her father who made no comment to her mother who pragmatically told her to stop wearing turbans because either she should wear a headscarf or not at all — to friends moaning that the headscarf was “part of who she was.” One of her friends simply said, “It’s your head, you do what you want with it!”

Throughout the entire process, her Moroccan-born partner, whom she refers to in the book simply as Mahdi, a scientist specializing in artificial intelligence, stands by her side, commenting wryly: “Guess what Iran, Saudi Arabia and France have in common? All three countries are mentioned in statements by Human Rights Watch and Amnesty International denouncing dress code restrictions on women.”

In 2016, Tighanimine was chosen to represent France as part of a program organized by the US State Department to bring together young European and American entrepreneurs. She traveled to the US with 40 other Europeans and “there I was, I felt French, people saw me as a Parisian and recognized me for what I was doing. It was great.”

Moving forward, Tighanimine believes in affirmative action until diversity is ensured. “Institutions and organization should have quotas. Many people can’t find a job or get apartments or bank loans. When you’re from a background like mine, it’s like you have a stamp on your forehead. I’m not embarrassed by it. It’s others who should be embarrassed that we should need to have quotas.”

In her book, Tighanimine confronts French society where it needs to be confronted, all the while making it clear that she is not to be labeled.