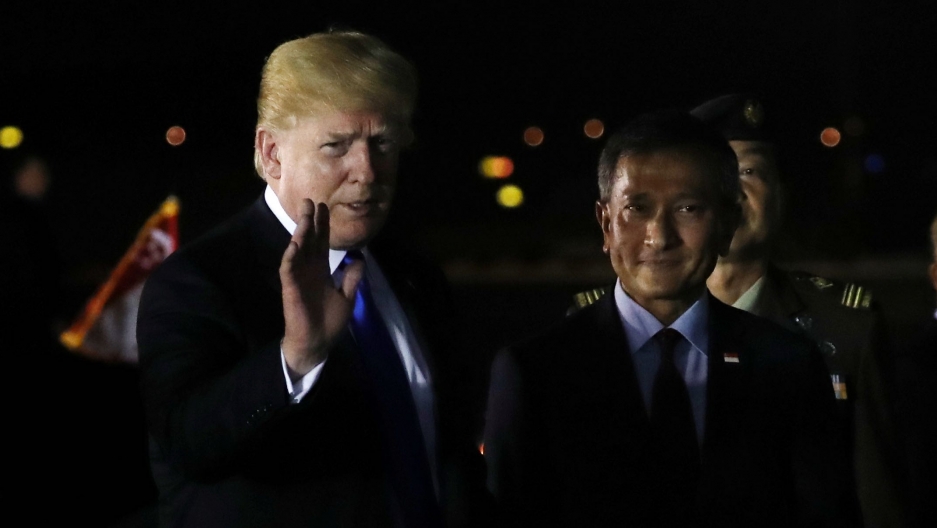 US President Donald Trump arrived in Singapore on Sunday for a historic summit with North Korean leader Kim Jong-un that could lay the groundwork for ending a nuclear standoff between the old foes and the transformation of the isolated Asian nation.

Trump flew into Singapore's Paya Lebar Air Base aboard Air Force One, looking to strike a deal that will lead to the denuclearization of one of America's bitterest foes. He came from a divisive G7 meeting in Canada with some of Washington's closest allies that further strained global trade ties.

After stepping down from Air Force One on a steamy tropical night, Trump was greeted by Singapore Foreign Minister Vivian Balakrishnan.

Asked by a reporter how he felt about the summit, Trump said, "Very good."

When Trump and Kim meet on Tuesday at Sentosa, a resort island off Singapore's port with a Universal Studios theme park and man-made beaches, they will be making history.

Enemies since the 1950-53 Korean War, leaders of North Korea and the United States have never met previously — or even spoken on the telephone.

Kim arrived at Singapore's Changi Airport after his longest trip overseas as head of state, wearing his trademark dark "Mao suit" and distinctive high-cut hairstyle. He has not left his country since taking office in 2011 other than to visit China and the South Korean side of the border Demilitarized Zone.

Arriving on a plane loaned by China, which for decades has been North Korea's only major ally, Kim was also greeted by Balakrishnan.

Traveling with him were top officials including Foreign Minister Ri Yong-ho and Kim Yong-chol, a close aide of Kim who has been instrumental in the diplomacy that culminated in Tuesday's summit.

Kim Yo-jong, leader Kim's younger sister, was also spotted in his delegation. She emerged as an influential figure in Pyongyang's opaque leadership in February when she led a North Korean delegation to the Winter Olympics in South Korea.

Bolton’s hardline rhetoric last month infuriated North Korea and nearly derailed the summit. He called for North Korea to follow a "Libya model" in negotiations. Libya unilaterally surrendered its nuclear weapons program in 2003, but its leader, Muammar Gaddafi, was killed in 2011 by NATO-backed rebels.

'Spur of the moment'

Trump, speaking in Canada on Saturday, said any agreement at the summit would be "spur of the moment," underscoring the uncertain outcome of what he called a "mission of peace."

He initially touted the potential for a grand bargain with North Korea to rid itself of a nuclear missile program that has advanced rapidly to threaten the United States.

But he has since lowered expectations, backing away from an original demand for North Korea's swift denuclearization.

He has said the talks would be more about starting a relationship with Kim for a negotiating process that would take more than one summit.

Nonproliferation expert Daryl Kimball, director of the Arms Control Association, said that to make the summit a success, Trump and Kim would need to agree on a framework for expert-level negotiations "to hammer out the details and time frame for specific action-for-action steps."

"As the leaders arrive in Singapore it is still not clear yet whether Trump and Kim are on the same page about the end goals, the pace, and the sequencing of the many steps involved in the complete 'denuclearisation' of the Korean peninsula," he said in a Twitter message.

A US official, speaking on condition of anonymity, said Monday's meeting appeared aimed at making eleventh-hour progress ahead of the summit since Sung Kim's earlier talks did little to narrow a gap between the two sides on the definition of denuclearization or win agreement on tangible commitments from Pyongyang toward dismantling its nuclear arsenal.

Kim met Singapore Prime Minister Lee Hsien Loong shortly after his arrival, driving from the St. Regis Hotel where he is staying, through the famous Orchard Road shopping district, which was closed off for his tightly guarded motorcade.

Bodyguards in dark suits jogged alongside his limousine.

At the hotel lobby, grim-faced North Korean security guards warned other hotel guests not to take pictures as Kim walked to his Mercedes Benz limousine.

When a couple of guests took a picture, a North Korean official stormed up to them, demanding to check their phones.

"I saw them taking a photo of our chairman. How dare they do so, they shouldn't," the official told Reuters later. He declined to be identified. Under the watchful eye of the official, and St. Regis staff, one male guest deleted his photos.

In his first public comments since arriving, Kim said Singapore's role would be recorded in history if the summit was a success.

Trump, who is staying in a separate hotel, the Shangri-La, is due to meet Lee on Monday.

North Korea spent decades developing nuclear weapons, culminating in the test of a thermonuclear device in 2017. It also successfully tested missiles that can reach the US mainland.

The tests came amid a campaign of "maximum pressure" on North Korea, led by the United States, that tightened economic sanctions and the possibility of military action.

The two leaders exchanged insults as fears of war grew.

But then in a New Year's address, Kim sounded a conciliatory note, saying his country had completed development of its nuclear program and would focus on economic development.

He also suggested a meeting with South Korea.

After a flurry of contacts between the two Koreas, South Korean officials suggested to Trump in March that Kim would be willing to meet face-to-face and the US president agreed.

Many experts on North Korea, one of the most insular and unpredictable countries in the world, remain skeptical Kim will ever completely abandon its cherished nuclear weapons. They believe Kim's latest engagement is aimed at getting the United States to ease the crippling sanctions that have squeezed the impoverished country.

Believed to be 34, Kim is one of the youngest heads of state in the world and looks an unlikely candidate to be making history of the kind that has eluded his father and grandfather, both past leaders of North Korea.

But since taking power after his father's death, the youthful Kim has displayed a mixture of ruthlessness, pragmatism and statecraft to get this prize: to sit across the table with the leader of the United States and be treated as an equal.

For Trump, a successful summit will give him a win on the international stage.

While foreign policy isn't usually a major aspect of congressional elections, it is unclear if Trump’s focus on getting tough with trade partners and solving the North Korean nuclear issue will have some influence on voters in the midterm polls in November.

The two leaders meet at 9 a.m. (0100 GMT) on Tuesday at the Capella on Sentosa island, a refurbished British Army artillery mess that is one of Singapore's most expensive hotels.