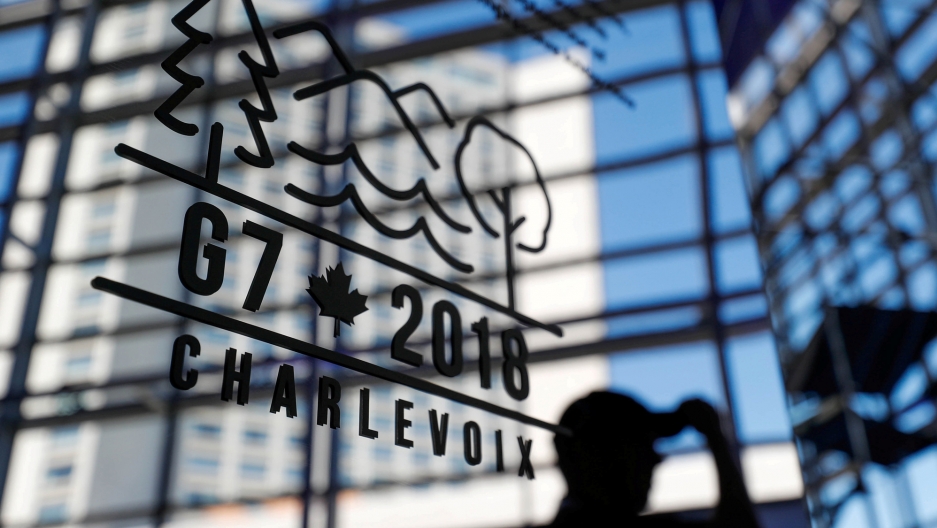 A man walks past the Charlevoix G7 logo at the main press center ahead of the G7 Summit in Quebec.

Leaders of the Group of Seven rich nations are meeting in Canada on Friday and are expected to pressure US President Donald Trump to lift sanctions on steel and aluminum.

The possible confrontation threatens to rupture a body that during its 43-year history has traditionally sought to find consensus on the economy and other issues.

Trump, who aides say has little interest in multilateralism, resumed his tirade against Canada early Friday morning and appeared prepared to exit talks early without a consensus agreement among all seven countries.

"Looking forward to straightening out unfair Trade Deals with the G-7 countries. If it doesn’t happen, we come out even better!" Trump tweeted early Friday morning ahead of his planned departure from Washington to Quebec.

Officials concede the mood is likely to be exceptionally tense.

"There will be some serious disagreements on a lot of things," a Canadian official told reporters late on Thursday.

Although Trump says the tariffs are necessary to protect US industry, Canada and the European Union have denounced them as illegal and are preparing retaliatory measures.

French President Emmanuel Macron warned Trump in a rare rebuke on Thursday that the other six members of the G7 could form their own grouping if necessary, adding that "no leader was forever."

British Prime Minister Theresa May took a more measured tone, telling reporters she wanted the European Union to use restraint in its retaliation to the US tariffs and that the response must be proportionate and legal.

Trump showed no sign of backing down on Friday, after earlier accusing both France and Canada of imposing massive tariffs on US goods and then accusing Canadian Prime Minister Justin Trudeau of "being so indignant."

In response, the Canadian official replied that "the prime minister and the president have very frank, direct, candid, honest conversations." Trudeau and Trump are due to meet on Friday "and they will have lots to talk about," the official added.

The White House subsequently announced the president would be leaving on Saturday, before the summit formally ends, to fly to Singapore for a meeting with North Korean leader Kim Jong-un.

While the G7 leaders have largely praised Trump for his efforts to stabilize the Korean peninsula, they are unhappy he pulled out of an agreement designed to limit Iran's nuclear ambitions.

The arguments threaten to derail a meeting that Trudeau had planned to focus on inclusive growth, gender equality and protecting oceans.

The Canadian official said Trudeau remained optimistic that the summit could help find common solutions to issues such as growth and environmental protection.

In Germany, top officials called for Europe to remain unified in the face of rising trade tensions with the United States even as they maintained that America remained its closest partner outside of the continent.

By Jan Strupczewski and William James/Reuters