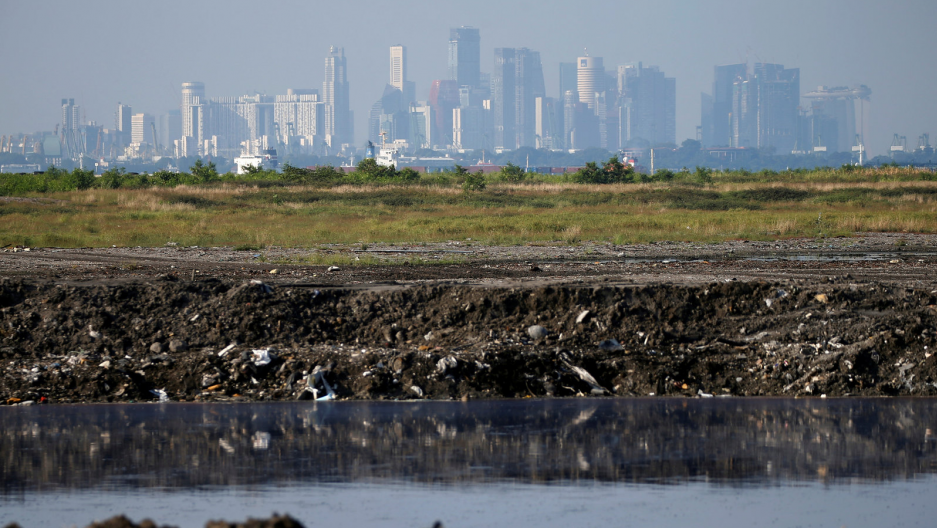 A view of the skyline of Singapore from Pulau Semakau landfill. Singapore aims to become a zero-waste nation, but currently on 6 percent of plastic waste is recycled.

As countries around Southeast Asia struggle to cope with growing piles of plastic and other waste on land and in their waters, Singapore is one country in the region that appears to have things figured out.

Singapore's streets are glistening clean, its parks and beaches mostly free from the trash that plagues neighboring countries like Malaysia and Indonesia. Almost all of Singapore's non-recyclable waste is incinerated, with the ash and some solid waste shipped to a man-made island nearby that doubles as a nature reserve.

But that solution looks as if it is running short on time.

The tip on Semakau island was supposed to meet Singapore's dumping needs until as late as 2045, according to environment ministry documents. But with the use of disposable products growing at a rapid rate, the ministry's most recent estimates show that Semakau could be full a decade earlier.

Plastics was the largest category of waste disposed of in Singapore last year — 763,400 tons — according to data from the National Environment Agency (NEA). Only 6 percent of plastic waste generated was recycled.

Analysis of the NEA data by Reuters shows that plastic waste per capita has increased nearly 20 percent over the last 15 years.

A report by the local Straits Times newspaper in March said each person in Singapore threw away an average of 13 bags a day in 2016.

So far, the government has not adopted any bans or charges on plastic bags or single-use plastic items like straws and plates. It has also not disclosed any plans to replace the Semakau dump.

"More needs to be done to prolong the life of Semakau landfill beyond 2035," the NEA said in an email when asked about plans for the dump.

The agency said that recycling initiatives had helped stabilize the amount of trash sent for incineration, despite increases in waste generation caused by population and economic growth.

Southeast Asia is home to four of the world's top marine plastic polluters, a trend some think will be exacerbated by last year's waste import ban in China, which used to be the world's top destination for recyclable trash.

The recent death of a pilot whale in Thailand with 80 pieces of plastic rubbish in its stomach has also drawn global attention to the problem.

Singapore, which plays host to the 10-member Association of Southeast Asian Nations this year, is planning a special ministerial meeting on climate action in July.

But climate groups have urged the government of the wealthy city-state, which enjoys broad support from its electorate, to spend more political capital on tackling waste in a convenience culture where deliveries and take-out meals are common.

Singapore says it aims to become a "zero waste" nation, meaning it will eventually not send any waste to landfill. However, it has yet to set a date for achieving that goal.

The NEA said it was implementing initiatives aimed at increasing recycling rates and reducing waste at the source. These have included increasing the number of recycling bins and awareness campaigns.

It said Singapore was offering research grants for companies and organizations to develop sustainable waste management technologies, and planned to make it mandatory for large generators of packaging waste to report the types and quantities they use and their reduction plans by 2021.

The local recycling industry has yet to feel the pinch of China's waste ban, the NEA said, adding that for now it was still able to find overseas markets for recyclables.

Kim Stengert, chief communications officer for WWF Singapore, said the group would like to see Singapore adopt measures like mandatory charges for plastic bags or requiring firms to either pay for or participate in the collection and recycling of plastics.

Singapore's senior minister of state for the environment and water resources, Amy Khor, said in March that unlike other countries with mandatory plastic bag charges, Singapore incinerates plastic waste before putting it in landfills.

"We do not face the land and water pollution issues that plague those countries," she said. She added that plastic bags were "necessary for responsible and hygienic bagging of waste" in Singapore's hot and humid climate.

Neighboring Malaysia has said it aims to introduce a nationwide ban on plastic bags within a year, while some local authorities in the Philippines already regulate their use.

"There is no rubbish piling up in the streets, so Singaporeans don't perceive a waste problem or feel personally responsible to reduce waste," said Sonny Ben Rosenthal, an academic who specializes in environmental issues at Singapore's Nanyang Technological University.